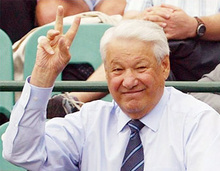 By the 1996 presidential election, Yeltsin’s career seemed doomed. His popularity had plummeted while the newly-revived Communist Party enjoyed a surge in support. Yeltsin staged an astonishing political comeback but he was a spent force. Bouts of ill-health, a disastrous financial crisis in 1998 and hectic government reshuffles all took their toll. On New Year’s Eve 1999, Yeltsin surprised his country and the world by announcing his resignation, leaving the power in the hands of the little-known Prime Minister Vladimir Putin.

Often ill-at-ease with protocol, Yeltsin was remembered for his gaffes and off-hand jokes. Thought to have been a result of alcohol abuse, his antics attracted worldwide attention. Yeltsin famously grabbed a conductor’s baton in Berlin and tried to sing along with the orchestra. In another celebrated incident, he failed to emerge from his plane at Shannon Airport for talks with Ireland’s Prime Minister. After his resignation Yeltsin made few public appearances, making an exception only for tennis tournaments, energetically cheering on Russian players. 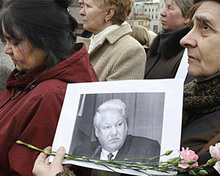 Boris Yeltsin died of heart failure on April 23, 2007, aged 76. His funeral service at the Cathedral of Christ the Savior in Moscow was the first for a head of state to be sanctioned by the Church for more than a hundred years. As Yeltsin’s body lay in state, thousands gathered to pay their last respects. Many didn’t hide their tears. The Soviet past was left well behind. Unlike most Soviet leaders, laid to rest by the Kremlin wall, Russia’s first President was buried at Moscow’s Novodevichy cemetery, a resting place of many artists, scientists and politicians.

Boris Yeltsin guided Russia through a time of great change and challenge. After decades of Communism, when Russia and the USSR were often seen as one and the same, the 1990s were an attempt to forge a new identity. Yeltsin’s Russia saw a huge religious revival and media boom. It enjoyed greater political and civic freedoms than it had ever known and carved itself a place among the world’s most industrialised democracies, turning G7 into G8.

Many will remember Boris Yeltsin as the man to blame for their crushed hopes and unfulfilled dreams. Yet, for others he brought a breath of fresh air, ending more than 70 years of Soviet Communism. The architect of modern Russia, he’s praised for leading the country onto the path to democracy and opening it to the world. Boris Yeltsin may have left a controversial legacy, but he has unquestionably written his name into Russia’s history forever.