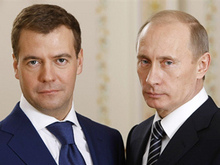 Once Vladimir Putin announced he was backing him as the next president, Medvedev’s popularity grew. He campaigned as Putin’s chosen successor, tying himself to his mentor’s policies. Putin supported his heir-apparent throughout the campaign. Election posters featured the pair side-by-side with the slogan: “Together we will win”. But their close alliance goes back much longer.

Dmitry Medvedev was born on September 14, 1965 into a family of university professors. He grew up in a suburb of Leningrad and trained as a lawyer at Leningrad State University (now St. Petersburg State University). Following in his parents’ footsteps, he returned there as a lecturer in the 1990s. While there, he also became involved in the city council, joining Vladimir Putin’s external affairs team as a legal expert.

Medvedev followed his boss to Moscow and into the Kremlin shortly before Putin was picked as Boris Yeltsin’s chosen successor. He also took an active role at Gazprom, twice holding the post as the gas giant’s chairman. Becoming one of the future president’s closest allies, Medvedev ran Putin’s first election campaign and was promoted to Kremlin Chief-of-Staff three years later. In 2005 he took up the role of First Deputy Prime Minister in charge of national projects – an ambitious social initiative covering agriculture, healthcare, housing and education.

Putin’s Russia… according to Dmitry Medvedev

Medvedev’s campaign brought few surprises. He wasn’t going for drastic changes but indicated he’d put his own stamp on Vladimir Putin’s policies. Medvedev has pledged to keep the country on the same course but added his signature dish to the menu: a greater emphasis on social policies and fighting corruption. Seen as an economic liberal, he considers himself a democrat and, unlike his mentor, doesn’t have a background in the Russian secret services.

A self-confessed gadget enthusiast, Medvedev is also a devoted hard rock fan. He collects original vinyl records of Deep Purple, Pink Floyd and Led Zeppelin. He enjoys swimming and also jogs, plays chess and practices yoga. Medvedev is married to his childhood sweetheart, Svetlana, and has a son. The family has a tomcat named Dorofei. It’s been revealed that the blue-eyed feline has a history of political fighting. He once got into a spat with the cat of the former Soviet leader, Mikhail Gorbachev, who was Medvedev’s neighbour… but after reportedly coming off second best, he had to be treated with antibiotics for more than a month. Dorofei is set to steal the limelight from Putin’s black Labrador Connie as the First Pet.