Russian history: From Empire to communism 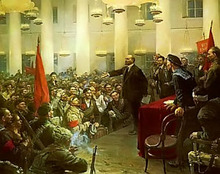 Rise of the Bolsheviks

By the time Nicholas II came to power in 1894, Russia’s growing industrialisation had produced a revolutionary socialist movement that was growing in strength. Russian workers began to organise into local political councils or soviets. The opposition formed several competing parties. One of them – the Russian Social Democratic Labour Party – wanted a revolution. In 1903 the party split into two wings: the radical Bolsheviks, led by Vladimir Lenin, and the relatively moderate Mensheviks, from the Russian “bolshinstvo” (majority) and “menshinstvo” (minority). The names referred to the narrow outvoting of the Mensheviks in the decision to limit party membership to revolutionary professionals, rather than including sympathisers.

In 1905 Russia suffered a string of embarrassing defeats in a military conflict with Japan in the Far East. Support for the already unpopular government dwindled. In St. Petersburg, troops fired on a peaceful demonstration by workers, killing and wounding hundreds and sparking the Russian Revolution of 1905. The uprising was suppressed, but Nicholas II had to concede major reforms, among them a constitution and the creation of the first Parliament, the Duma. 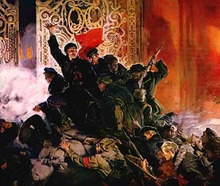 In 1914, the First World War brought another crisis. The Russian capital’s name became the first victim – St. Petersburg was renamed Petrograd. The original name was seen as too German; Petrograd was chosen as a more Russian-sounding and patriotic one.

But patriotism didn’t help. Hit by military losses and severe food shortages, Russia’s economy collapsed. By February 1917 many workers had had enough. Riots broke out in Petrograd. Nicholas II abdicated on March 2, marking the end of imperial rule in Russia. A shaky coalition of political parties was formed, declaring itself the Provisional Government. They set up headquarters in the winter residence of the Russian Tsars – the Winter Palace.

Nicholas and his family were imprisoned and later executed on the night of July 16-17, 1918. Meanwhile, the Bolsheviks were winning more support from the increasingly frustrated soviets. On October 25, led by Vladimir Lenin, they seized power – their assault on the Winter Palace became the defining moment of the October revolution.

Ironically, throughout the Soviet era the anniversary of the October Revolution was never actually marked in October. In 1918, Soviet Russia adopted the Gregorian calendar, already well established in most of the Western world. The Julian calendar, formerly used in Russia, was 13 days behind. So October 25 became November 7. And although the name stayed, “the Great October Socialist Revolution” continued to be celebrated on the 7th of November.