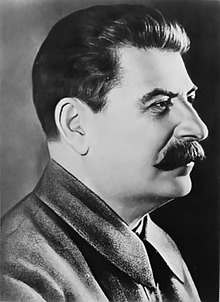 After Lenin’s death, the Communist Party was torn apart by a bitter power struggle. Joseph Stalin emerged victorious and went on to rule the Soviet Union for a quarter of a century, becoming one of the most powerful and murderous dictators in history. Iosif Dzhugashvili was born on 18 December 1879 in Georgia, then part of the Russian empire. He studied at a theological seminary and had some success as a poet, publishing some of his verse in local newspapers.

He failed to graduate, becoming a revolutionary activist instead, with several arrests and spells in Siberia. In 1913 he adopted the name Stalin, derived from the Russian word “stal” (steel). Although not one of the key players in the October Revolution, he quickly rose through the ranks, outmanoeuvring his rivals step by step. Leon Trotsky, one of his key opponents, who saw himself as Lenin’s heir apparent, was thrown out of the Communist Party and exiled. Trotsky spent his last years in Mexico before being assassinated by a Soviet agent on Stalin’s orders.

After gaining power, Stalin immediately set the country on a different course. The NEP was scrapped and replaced by five-year economic plans dictated from the top. For Stalin, the relative freedoms of the NEP were a retreat from socialism and the revolutionary spirit. The term “NEPman”, used to describe the entrepreneurs who profited from the New Economic Policy, became synonymous with slacker and scoundrel, turning into a grievous insult.

Agricultural lands were collectivized to create large, state-run farms (“kolkhoz«), sparking fierce opposition among many land-owning peasants. They resisted by smashing equipment and slaughtering their animals. Stalin retaliated with a policy of »dekulakization« (»раскулачивание“ or ”raskulachivanie“ in Russian). The word ”kulak« (literally »fist”, by extension “tight-fisted”) originally referred to independent peasants who owned larger farms and used hired labour. Stalin turned it into a pejorative term for better-off farmers, seen as enemies of the revolution. Those identified as kulaks were forced off their land and often killed. Pushed to the extreme, the policy saw tens of thousands deported and executed. The word “dekulakization” is now popularly used to mean a forced seizure of someone’s wealth and property.

Meanwhile, industrial development was pushed along at breakneck speed and production was almost entirely shifted from consumer goods to heavy industry. Arts and literature were tightly controlled and religion violently repressed with churches closed, destroyed, or converted for other uses. Stalin purged all opposition within the party as well as all opposition to party policy in the country. By the end of the 1930s, life in the Soviet Union had become more strictly regulated than ever before.

Stalin’s repressions created a vast system of labour camps managed by a government agency known by its acronym Gulag. Eventually “Gulag” came to mean all prisons and camps throughout Soviet history. The convicts’ labour, especially in Siberia, became an important part of the industrialisation effort. An estimated 18 million people passed through the Gulag system, famously described by novelist and historian Aleksandr Solzhenitsyn. Still, the term known all over the world is rarely used in Russia itself, where the individual camps and the whole system are called simply “the camps” or “the zone”.

Stalin’s policies quickly propelled the USSR from an agricultural state to a major industrial powerhouse. From those times comes the word “Stakhanovit” («стахановец», pronounced “stakhanovets”) – now a mocking term for overachievers on the job. The term was inspired by Aleksey Stakhanov who’d mined 102 tons of coal in less than 6 hours (14 times his quota). This sparked the Stakhanovite movement, encouraging the rise of worker productivity. Urged to emulate his heroic example, plants and factories competed fiercely to outdo each other, while the man himself even appeared on the cover of Time magazine. Stakhanov and other “model workers” were promoted in the press, literature and film. Their progress eventually served to push up work quotas.

By the end of the first five-year plan, Stalin believed his exhausted nation needed a break. In 1934 the doctrine of socialist realism emerged, which would dominate Soviet culture for decades. It championed optimism, exuberance, comradely devotion and education over entertainment. Parades and public demonstrations became widely used to promote a single Soviet identity of order, patriotism and harmony. Stalin’s 1935 phrase “Life’s become better. Life’s become more cheerful” was a popular slogan of the time and is now a sarcastic way of lamenting life’s tough circumstances.