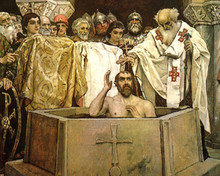 An ancient empire, the cradle of three modern-day nations…

This was Kievan Rus – a powerful East Slavic state dominated by the city of Kiev. Shaped in the 9th century it went on to flourish for the next 300 years. The empire is traditionally seen as the beginning of Russia and the ancestor of Belarus and Ukraine. From those ancient times comes a popular proverb “Your tongue will take you to Kiev”. If you’re wondering how or why a part of your body would transport you to a European capital, here’s the story. Legend has it that in 999 a Kiev resident called Nikita Shchemyaka got lost in the far-away steppes and was caught by a militant nomadic tribe. Nikita’s tales of Kiev’s wealth and splendor impressed the tribe’s chief so much, he hooked Nikita by the tongue to his horse’s tail and went to wage war against Kiev. That’s how Nikita’s tongue took him home. But don’t panic if you hear the saying – you won’t share the unfortunate Nikita’s lot. Today, the proverb simply means you can always ask your way around.


Back in those ancient times Russia it seems nearly became a Muslim country. The story goes that its ruler at the time, Prince Vladimir, wanted to replace paganism with a new religion. He was tempted by Islam because it allowed men to have several wives. But Vladimir finally decided against it because he thought his people would be unhappy under a religion that prohibits wine. So in 988 Kievan Rus converted to Orthodox Christianity. 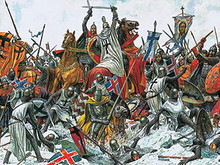 In the 13th century Kievan Rus was invaded by the Tatars. Their state, the Empire of the Golden Horde, ruled over Russian lands for almost three centuries. But in 1380 a Muscovite prince, Dmitry Donskoy, won a major battle against the Tatars under the command of Khan Mamai at Kulikovo Field. Donskoy became a popular hero and the words “the slaughter of Mamai” now mean a carnage or terrible defeat. And “Mamai’s invasion” is a name to jokingly describe troublesome or unwelcome visitors.

And if you find out that “walking like a pig” has nothing to do with the grunting animals you’ve got another epic battle to blame – the Battle of the Ice in 1242. Hoping to exploit the Russians’ weakness after the Tatar invasion, the Teutonic Knights attacked the city of Novgorod. The German crusaders were defeated in a fight on Lake Peipus, between modern Estonia and Russia. During their retreat, many knights drowned in the lake when the ice broke under the weight of their heavy amour. “The pig” was the Russian way of describing the wedge-shaped formation of the German army, often used in Europe in the 13-15th centuries. Speaking of the “advancing pig”, the medieval Russian chronicles referred to the marching Teutonic knights. 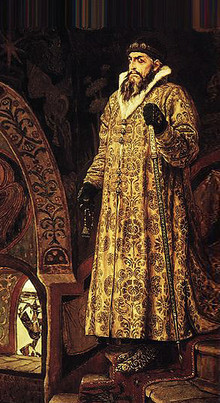 Meanwhile, Moscow replaced Kiev as the new centre of spiritual and political power, becoming the Grand Duchy of Moscow. In 1547 Ivan IV (the Terrible), who was also Grand Duke of Moscow, crowned himself the first Tsar. Ivan wasn’t of course born the Terrible. He earned his nickname for his ruthless campaigns against the nobility, confiscating their lands and executing or exiling those who displeased him. It was a drive that strengthened Russia’s monarchy like never before. But he started out as a reformer, reorganizing the military, proclaiming a new legal code and curbing the influence of the clergy. It was Ivan who turned Russia into a multi-ethnic and multi-religious state.

In 1552 Ivan crushed the Tatar stronghold of Kazan. The campaign began Russia’s expansion into Siberia, annexing a large Muslim population. One of Moscow’s most famous landmarks is another of Ivan’s legacy. St. Basil’s Cathedral on Red Square was built by his order. The cathedral is a collection of nine chapels put on a single foundation. The central and tallest one commemorates the invasion of Kazan while the rest celebrate other key victories in the Tatar campaign. A popular legend has it that the work was done by two architects – Postnik and Barma (although some say it was one and the same person). When Ivan saw the finished cathedral he liked it so much that he had the architects blinded to prevent them from building anything like it elsewhere.