Russian history: Through Time of Troubles to Imperial Russia 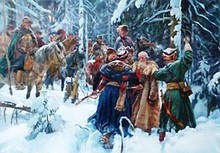 From Poles to Romanovs

Soon after Ivan’s death, the state weakened, plunging into a period of unrest and Polish invasion, known as the Time of Troubles. Ivan’s son died childless and a string of would-be-successors battled it out for the throne. Exhausted by the turmoil, in 1613 the nobles chose Mikhail Romanov, one of the closest surviving relatives of the royal family, as Tsar. The Romanov dynasty was to rule Russia for the next 300 years until the 1917 Revolution brought an end to the Tsarist state.

Back from those restless times Russia inherited, of all things, a name for bad tour-guides. The Polish troops set out to kill the newly-chosen Tsar who was hiding in a remote village. Legend has it that a local peasant, Ivan Susanin, promised to guide them to the hide-out. Instead, he led the Poles deep into the marshy woods and perished together with the soldiers. You’d have a hard job finding a Russian who’s never heard of Ivan Susanin, now a popular character in Russian music and literature. Ironically, a “Susanin” is also somebody who loses his way, leading you to a totally wrong place.

Under the first few generations of Romanovs, when Western Europe went through a political and economic boom, Russia lagged behind… until Peter the Great turned the page. Peter became Russia’s de facto ruler in 1696 after a fierce power struggle with his elder sister Sophia. Fascinated by all things European, he spent almost two years touring Western Europe – the first time a Russian Tsar ever went abroad. He’d often travel in disguise, even working as a ship’s carpenter in Holland. 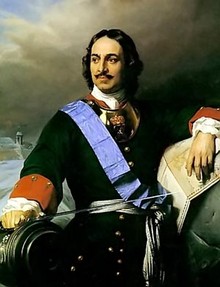 After his return, Peter embarked on an ambitious programme to transform Russia into a European state. His first target was the traditional look of his courtiers – beards were out, Western fashions in. Peter went on to modernise Russia’s military and administrative structure, simplify the alphabet, change the calendar and make a myriad other sweeping changes. During his reign, Russia finally gained its long-coveted access to the Baltic Sea, defeating the Swedes. In 1703 Peter started his most dramatic project – a brand new capital to be built from scratch on the Gulf of Finland. Over the next nine years, at tremendous human and financial cost, St. Petersburg sprang up.

Peter assumed the title of Emperor and Russia officially became the Russian Empire in 1721. Peter the Great remains one of the most controversial figures in Russian history. While some say he made Russia a powerful European player, others believe the changes were too brutal and costly. But when the Russians speak of “cutting a window through to Europe” they refer to Peter’s reforms – and mean a breakthrough or progress. 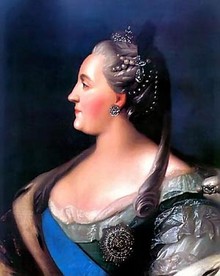 Catherine on the throne

Nearly forty years passed before a comparably ambitious and ruthless ruler gained the Russian throne – Catherine II, often known as Catherine the Great. Born a German princess and married to Peter’s grandson, she became more Russian than the Russians, adopting the language and religion of her new home. Coming to power in a coup d’état against her husband in 1762, Catherine went on to become one the most powerful European monarchs, known as a great patron of the arts and literature.

St. Petersburg owes to her one of its most famous landmarks – the “Bronze Horseman”, a statue of Peter the Great on the banks of the Neva River. And many Russians refer to her daily without even knowing it: a popular rumour says the Russian slang word for money – “babki” (literally “old women”) – originated from Catherine’s portrait on the pre-Revolution 100-rouble banknote.

A popular expression meaning “hoax” has also come to us because of Catherine. The phrase “Potemkin villages” refers to fake settlements set up by order of Prince Grigory Potemkin to fool the Empress during her visit to the Crimea in 1787. After the Crimean military campaign, led by Potemkin, Catherine had come to inspect the newly-conquered lands, accompanied by courtiers and foreign ambassadors. To impress her and her party, Potemkin had elaborate fake settlements constructed along the desolated banks of the Dnieper River, with flocks of sheep driven every night to the next stop along the route. As Catherine sailed past, she saw lively colourful villages – in reality nothing more than theatrical sets. Modern historians still argue about the truth behind the story, but the tale is generally considered largely exaggerated. Still, “Potemkin villages” have come to mean an eye-wash intended to mask an embarrassing or potentially damaging situation.

The idea was revived in the USSR as the Soviet government attempted to fool foreign guests. The visitors, often already sympathetic to communism, were shown select thriving villages, factories, schools and stores, presented to them as if they were typical, rather than exceptional. Given strict limitations on the movement of foreigners in the USSR, seeing less perfect examples was out of the question.

From Catherine’s times the Russians particularly treasure the memory of Alexander Suvorov, one of the few great generals in history to never lose a battle. “Train hard, fight easy” – a saying coined by Suvorov – became a proverb. Suvorov led Russia’s first campaigns against Napoleon’s armies in Italy in 1799. His marvel of a strategic retreat through the Alps earned him the top rank of generalissimo. He became the fourth and last holder of the title in pre-revolutionary Russia, until Josef Stalin was proclaimed Generalissimo of the Soviet Union.