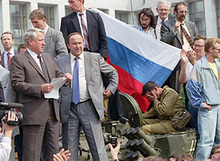 In March 1990 Gorbachev became the President of the Soviet Union, the first and only man to hold the rank. But things began to spin out of control. Spurred on by “glasnost”, the long-suppressed nationalist feelings swelled in the Soviet republics. In August 1991 hard-liners had had enough. With Gorbachev on vacation in the Crimea, they attempted a coup. Gorbachev was put under house arrest for three days.

Back in Moscow, the newly elected Russian President Boris Yeltsin climbed on a tank – the iconic snapshot flew around the globe – and kick-started the resistance. Gorbachev was reinstated but support had swung over to Yeltsin. A string of republics declared independence. The presidents of Russia, Ukraine and Belarus met in the Belovezh Forest in Belarus on December 8, 1991. Their so-called Belavezha Accords put an end to the USSR, replacing it with the Commonwealth of Independent States (CIS). Gorbachev resigned on December 25, 1991. Two days later, Boris Yeltsin moved into Gorbachev’s former office.

Out of office, Mikhail Gorbachev remained driven by work. He set up the Gorbachev Foundation, an independent think-tank, as well as an environmental organization – Green Cross International. He received numerous awards and honorary degrees from a string of universities and gave lectures around the globe. Returning to politics, Gorbachev ran for the presidency in 1996, but received lukewarm support. He even tried his hand at show business, appearing in a TV commercial for the Pizza Hut chain in 1997 and becoming the face of the French luxury brand Louis Vuitton a decade later. 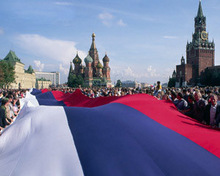 Loving the past… from a safe distance

Meanwhile, Russia continues to negotiate its understanding of recent history and national identity. Bouts of nostalgia are common, with many longing for the times when the Soviet Union was at the peak of its superpower status. Support for the Communist Party remains widespread – its candidates have come second in every post-Soviet presidential election.

Soviet-era classics continue to flourish on TV and Soviet-era staples are no longer seen as tacky souvenirs for foreigners to take home. The USSR is firmly back on clothing racks. Hip fashion designers are exploiting the trend, while Moscow’s gilded youth sports t-shirts and tracksuits emblazoned with “CCCP” (the Russian for “USSR”), hammers and sickles, and red stars.

New leader for a new Russia

The man who put an end to the USSR was raised to power by Mikhail Gorbachev. Ironically, he went on to depose his mentor and destroy his empire. Boris Yeltsin was born on February 1, 1931 near Sverdlovsk (now Yekaterinburg). His father spent several years in Stalin’s labour camps – Yeltsin joined the Communist Party only during Khrushchev’s anti-Stalinist reforms. He toiled in construction and worked through the party ranks, but it wasn’t until Gorbachev’s rise to power that he’s got his career break. Hand-picked by Gorbachev to shake up the corrupt Moscow party hierarchy, Yeltsin proved himself an eager reformer. However, he soon grew weary of the pace of “perestroika”. In 1990 Yeltsin quit the Communist Party. A year later he emerged as the first elected president of the Russian Federal Republic within the USSR. 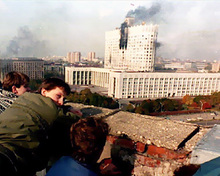 Yeltsin came to power on a wave of optimism, hailing a new era of democracy and economic freedom. Instead, everything seemed to go wrong. Radical market-oriented reforms and massive privatisation shook a country that was used to state control. The wild-west capitalism meant poverty for many and staggering wealth for the few, as well as crippling economic depression and rampant crime and corruption. Salaries weren’t paid and many pensioners were reduced to begging after their lifelong savings were wiped out. The reforms soon became widely resented.

In 1993, deadlock with the increasingly frustrated legislators pushed the country to the verge of civil war. Yeltsin’s opponents barricaded themselves in the parliament building – now home of Russia’s government – and tried to take control of the television station. Yeltsin called in the tanks. He shelled his way out of the conflict but the tanks were needed again a year later when the southern republic of Chechnya wanted to break away. Yeltsin pledged to crush the resistance in days, but the botched operation grew into a bloody war.