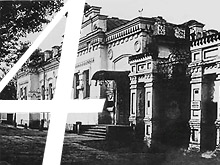 On August 4, 1975, Politburo of the Communist Party of the Soviet Union authorized the demolition of the Ipatiev House, where the last Tsar of Russia and his family were executed by the Bolsheviks almost sixty years earlier.

On of the most dramatic events in Russia’s history is the brutal murder of Tsar Nicholas II, his wife, Alexandra and their five children in July 1918. The entire Romanov family was herded into the basement of the infamous house in Ekaterinburg and shot. Their remains were not discovered until 1979.

At first, the Ipatiev House was turned into a museum devoted to the Russian Bolshevik Revolution. The communists took pride in the last prison and execution site of the family, and it was celebrated as a “symbol of justice”. It was often visited by Communist Party members, who would gather around and pose for photographs before the bullet-damaged wall of the basement. Conversely, the house was slowly becoming a place of worship for those wishing to honor the memory of the imperial family. More and more often, the house keepers would find flowers placed at the steps of the house.

The museum was closed down in 1932, and throughout the years served as place for various administrative establishments, before becoming an Anti-Religious Museum in 1938. During the years of World War II, the Ipatiev House turned into a hiding place for exhibits of the State Hermitage museum of Leningrad (now St. Petersburg).

With the upcoming 60th anniversary of the execution looming in 1978, the site where the tragedy played out was attracting even more attention, especially from foreign visitors and press. The KGB Chairman, Yury Andropov, had sent a secret note to the Politburo with the proposal to order “the demolition of Ipatiev House in the course of a planned reconstruction of the city,” arguing that “anti-Soviet circles in the West are conspiring various propaganda campaigns around the Romanov Tsar family.”

Within days, the Politburo had approved the proposal, but it was not until two years later that the house was brought down. The task was passed on to the first secretary of the Sverdlovsk region, Boris Yeltsin, who later wrote in his memoirs, “It was impossible to oppose…sooner or later we will be ashamed of this piece of barbarism." On September 6, 1977 the house was bulldozed.

Despite the government’s attempts to try to destroy forever the memory of Russia’s last tsar; people kept coming in secret during the night to leave tokens of remembrance on the vacant site, turning it into a place of pilgrimage. With the beginning of Perestroika, the plot of land where the Ipatiev House once stood attracted an increasing number of faithful. In September 1990, the Executive Committee of Sverdlovsk Region allocated the land to the Russian Orthodox Church and allowed the building of an official memorial site.

Architect Konstantin Efremov took on the role as lead designer, but construction was delayed due to the difficult economic situation in the country during the 1990s. The works resumed in 2000, after Nicholas II and his family were canonized by the Russian Orthodox Church. Finally, in May 2003, a five-domed Church on the Blood in Honor of All Saints Resplendent in the Russian Land was completed to commemorate the Romanovs’ sainthoods.