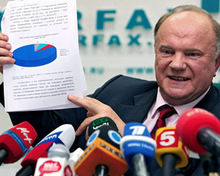 Second was the leader of the Communists, Gennady Zyuganov, a veteran of Russian and Soviet politics. He reached his peak in the 1996 presidential election, when he came close to defeating Boris Yeltsin. On that occasion Zyuganov managed to take the election into a second round that the Communists claimed was fixed. Communist Party candidates have come second in every post-Soviet presidential ballot. Ahead of the election, Zyuganov penned a book of political jokes that he entertained his party activists with on long train trips. «100 Jokes from Zyuganov» pokes fun at the pro-Kremlin United Russia Party and Vladimir Putin. But the most personal joke seems to be the one about the 1996 poll:

An aide rings up Boris Yeltsin the day after the election and asks what he wants to hear – the good or the bad news. Sweating, Yeltsin replies:

As his shaky hand moves for the pistol, Yeltsin asks: 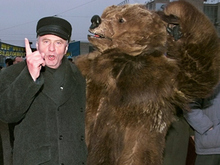 In third place was Vladimir Zhirinovsky, the flamboyant leader of the Liberal Democrats. Famous for his ultra-nationalist rhetoric and anti-Semitic record, he doesn’t shun strong language and fist-fights with his opponents. The man once memorably declared that “Russian soldiers will be washing their boots in the Indian Ocean”, referring to his wish to extend Russia’s military presence in the region. The Liberal Democrats say they are an opposition party but in Putin’s Russia they routinely voted the Kremlin way. A fan of political stunts, Zhirinovsky recruited Andrei Lugovoy, the prime suspect in the poisoning of former security officer Alexander Litvinenko, to run as a party candidate in the 2007 parliamentary election. Lugovoy won a seat, and with it immunity from prosecution. 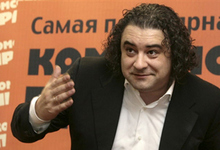 Trailing behind with only a fraction of the vote was Andrey Bogdanov, an obscure leader of a little-known party. With his long black hair, many say he looks more of a rock star than a politician. A few things were discovered about him during the campaign, including the fact that he’s the leader of Russia’s freemasons, the Grand Master of the Grand Lodge of Russia; he keeps a blog and wants to take Russia into the European Union. Bogdanov’s Democratic Party didn’t make it into Parliament in the 2007 election, so he had to collect two million signatures of support to run as an independent candidate. 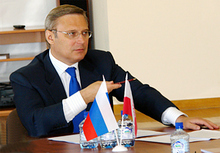 The requirement proved a stumbling block for another presidential hopeful, Mikhail Kasyanov, Putin’s ex-prime minister turned staunch critic of his former boss. He failed to qualify as election officials found too many invalid signatures on his list of alleged supporters. Having served as Finance Minister under Boris Yeltsin, Kasyanov became head of Putin’s government in mid-2000, but was sacked four years later after falling out with the Kremlin.

Another opposition leader, Garry Kasparov, dropped out of the race. Scoring points away from the game board has proved hard for the retired world chess champion. Kasparov cited difficulties in arranging for supporters of his the Other Russia movement to meet in Moscow, an official requirement for his candidacy.

The fairness of the poll was disputed as observers gave conflicting reports. While some declared the election free and fair, others reported inequalities in media coverage of the candidates and noted that the opposition was treated unfairly. The OSCE election monitoring group boycotted the election, citing restrictions on its observers by the Russian government, a charge Russia strongly rejected.