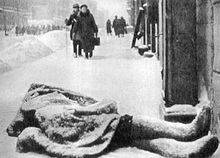 WW2 and the siege of Leningrad

The outbreak of the Second World War found the Soviet Union unprepared for the conflict ahead. Political purges had stripped the army of many of its experienced leaders while industrial production was slow in adapting to military needs. Having signed a non-aggression pact with Germany in 1939, Hitler’s invasion of June 1941 caught the USSR by surprise. By the end of the year, the Germans had seized most of the Soviet Union’s western territory and surrounded Leningrad.

Leningrad’s horrific siege was one of the most lethal in world history. It lasted for 900 days, from September 1941 to January 1944. The city’s civilian population of almost three million refused to surrender, even though they were completely surrounded. By the first winter of the siege there was no heating, no water supply, almost no electricity and very little food. Despite non-stop air and artillery bombardment, the city’s greatest enemies were hunger and bitter cold. Exhausted people collapsed and died. The streets were littered with dead bodies. The only life-line to the mainland was the ice of Lake Ladoga – known as the “Road of Life”.

Somehow, the city survived, its heroic resistance summed up in the motto: “Troy fell, Rome fell, Leningrad did not fall”. The blockade took the lives of at least 670,000 people, although some estimates suggest that as many as 1.5 million people died. The city became the symbol of Soviet resilience and invincibility. The siege was commemorated by the Green Belt of Glory, a unique complex of memorials along the historic frontline. You can still see warnings in St. Petersburg advising which side of the street is safe from the German shelling. 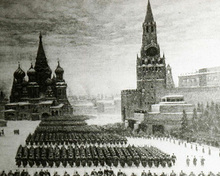 Meanwhile the Germans advanced as far as Moscow, reaching the outskirts by early December 1941. Hundreds of young recruits were preparing to defend the capital. But none could imagine that before going to battle they would march on Red Square in front of Joseph Stalin and top Communist Party officials. Against the advice of his generals, with the Germans pushing on, Stalin held a military parade in Red Square on November 7 to mark the anniversary of the Bolshevik Revolution.

The parade was kept secret until the last moment. That day the Soviet air force managed the unimaginable – not a single bomb was dropped on the capital. The troops left Red Square to head straight to the frontline. The parade had a tremendous impact on morale in Moscow and throughout the Soviet Union, becoming the turning point of the war. The capital never surrendered and for the first time the Germans were thrown back. 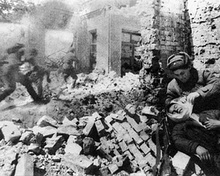 The siege of Stalingrad

Slowly, the industrialisation of the 1930s, driven by the USSR’s vast resources and workforce, started paying off. The tide turned in February 1943, when the Germans suffered a devastating defeat in the battle of Stalingrad. One of the most brutal standoffs in human history, it had begun the previous year, in the summer of 1942.

A major industrial centre on the Volga River in southern Russia, Stalingrad (now Volgograd), was a coveted prize in itself. Control over it opened the way to the vital Caucasus oil fields. The city’s very name drove Hitler’s obsession with it. Seizing Stalingrad – “Stalin’s City” – would deal a disastrous blow to Soviet morale, something Stalin couldn’t afford. His order to the troops was: “Not One Step Back”.

The horror of Stalingrad lasted for 199 days, costing an estimated 1.5 million lives from both sides. The besieged city quickly turned into a meat grinder. The Soviet losses were so great that, at times, the life expectancy of a newly arrived soldier was less than a day. Battles raged for every street, house, basement and staircase. Areas captured by the Wehrmacht troops by day, were re-taken by the Soviet army at night. The Germans dubbed this type of war Rattenkrieg – “rat war”, bitterly joking about seizing the kitchen but still fighting for the living-room.

One building that the Germans failed to take was the so-called “Pavlov’s House”. In September 1942, a Soviet platoon led by Yakov Pavlov turned an apartment block in the city centre into an impenetrable fortress. Penned in and surrounded by Nazis, a little more than a dozen men rebuffed assault after assault. They held out for two months, until they were relieved by counter-attacking Soviet forces.

Another Stalingrad legend was sniper Vasily Zaitsev. During the battles in and around the city, he picked off more than 200 German soldiers. The Soviet press lost no time in spreading the news of his exceptional shooting skills. The story goes that the Germans decided to send a super-sniper of their own to kill him. After a dramatic cat-and-mouse game, lasting several days, Zaitsev finally outwitted his adversary. Although it doesn’t seem to be supported by either German or Soviet archives, the tale of the duel inspired the novel “War of the Rats” by David L. Robbins and a Hollywood epic “Enemy at the Gates”. 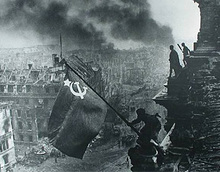 The cost of victory

The Soviet troops held out against the enormous German army, decimating and wearing it out, until a relieving force encircled the city compelling the invaders to surrender. The crushing defeat at Stalingrad was unmatched in scale, spurring the Soviet drive towards victory… In May 1945 Berlin finally fell.

The famous photo of two Soviet soldiers unfurling a red flag over the Reichstag became an iconic image of World War II. It’s argued that the picture didn’t capture the actual moment of Soviet glory but was staged a day or two after the storming of the building, and even retouched by the Soviet propaganda machine. The flag is claimed to originally have been a tablecloth brought by the photographer himself. Still, this was a symbol of the USSR’s triumph… the victory that came at a colossal cost.

The number of Soviet deaths was at first grossly distorted – the figure Stalin gave in 1946 was seven million. The USSR’s losses are now estimated at about 26.6 million, accounting for half of all WW2 casualties. The memory of the war, referred to as the Great Patriotic War, is particularly venerated in Russia. In the USSR the end of the war was considered to be May 9, 1945, when the German surrender took effect. The date has become a national holiday – Victory Day – and is commemorated in a grand military parade on Red Square.