Evgeny Yasin is a leading Russian economist who worked out some practical strategies to get Russia out of the economic turmoil of the early 1990s. From 1994 - 1998 he was the Minister of the Economy of the Russian Federation. Politicians and economists of various trends consider Evgeny Grigoryevich as a man whose recommendations one can’t ignore. At present he is the Director of Research at the Higher School of Economics, one of the leading universities in Moscow.

From construction to university

Evgeny Yasin was born in 1934 in the port city of Odessa on the Black Sea (now Ukraine). In his early years – right after WWII - the Soviet government encouraged many youngsters to participate in the reconstruction of the war-ravaged economy. Many boys and girls chose to become construction engineers. “It was a kind of fashion at that time,” Yasin later said in an interview. So in 1952 he entered the Hydrotechnical Institute in Moscow. Five years later, in 1957, he received a certificate as a bridge-building specialist.

Yasin began working at construction sites, but he soon realized that he had picked the wrong profession. Young Evgeny was especially irritated by the way things were carried out at construction sites – it was impossible not to add figures in the production reports and as a result the workers would not get paid well. Yasin hoped that some day he would be able to break this “vicious circle” – and he made a firm decision to become an economist. In 1958 he entered the Economics Faculty of the Moscow State University.

One of his favorite authors at that time was the economist Ivan Malyshev, who wrote that the problem of the Soviet economy lay in the fact that specialists were not doing enough to get it to the stage of Communism. Yasin shared this point of view – just like many other people at the beginning of the 1960s.

But later on Yasin began to study the research of the Nobel Prize winner Leonid Kantorovich on economic models that would optimize the use of resources. The author proved that you can’t form the price of a product only by taking into consideration labor expenses – there are other variables that are constantly involved in the process. That research made Yasin switch to the mathematic modeling of the economic processes.

After his graduation in 1963 Evgeny Grigorievich began his post-graduate studies. He worked on research called “Methodology to improve the information flow in the industrial sector of economy.” He combined his studies with work at the Research Institute for the USSR Central Board of Statistics. After the completion of his thesis he became the head of one of the Board’s departments.

According to Evgeny Yasin, that research taught him to always rely on various sources when trying to assess the economic processes in the country. Only in this way could one get the precise information about the real state of things. Step by step Yasin came to the conclusion that there would come a time for the planning economy to collapse. But there was no way to deliver this notion to the Soviet leaders. So he continued his research.

In 1976 Yasin received a Doctor of Economy degree and the title of Professor. By that time he had become the Laboratory Chief at the Central Research Institute for the Economy and Mathematics. In 1979 the Central Committee of the Communist Party issued a decree that called for the perfection of economic and managerial mechanisms. Evgeny Yasin became one of the key scientists working in the development program for all the sectors of the economy. The research created a basis for a more fundamental task – revitalizing the Soviet industrial infrastructure at the end of 1989 when the planned economy began to send shivering signals. Evgeny Yasin became a member of the Governmental Commission on Economic Reform headed by the academician Leonid Abalkin (the commission was also known as “the Abalkin team”).

Evgeny Gigorievich says that it was quite a challenging task. Even in 1989 he had no idea that Soviet Union was to fall apart two years later. After all the harsh realities were carefully researched, the implementation of market principles into the state economy turned out to be the only choice for Yasin and his colleagues. And Evgeny Grigorivech was pleased that the Soviet Leader Mikhail Gorbachev gave his principal agreement to implement the reforms. 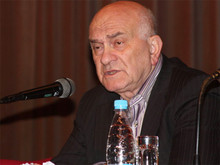 There were heated debates on how to do it. The first model was designed by the young economist Grigory Yavlinsky. It was called “500 Days” – the amount of time needed to restructure the whole economy. It was endorsed by Gorbachev but failed due to the resistance of hard-liners in the Politburo and in the Council of Ministers. The second variant was designed by Abalkin and Nikolay Ryzhkov, the Chairman of the USSR Council of Ministers at that time. It relied on the partial retaining of planned economy principles. Though Yasin was a supporter of the “500 Days” model, he offered his own variant, which the Soviet authorities considered even more radical. Evgeny Grigorievich tried to convince the government in 1990 that there was no other way left but to lift the price regulation policy. When he realized that his point of view was ignored he saw no more point in cooperating with the government. Yasin went back to his research under the aegis of the Russian Entrepreneurs Union headed by Arkady Volsky. In 1992 the government abolished price regulation.

Sorting out the economy

The expertise of Evgeny Grigorievich and his colleagues was back in demand. In 1993 he actively participated in numerous panel discussions on how to get the Russian economy out of turmoil. Yasin proposed a set of measures to support the industrial sector. In 1994 he received the post of Minister of the Economy in the government headed by Viktor Chernomyrdin.

During his time in the government Yasin tried hard to implement the results of his scientific research. He concentrated heavily on fixing the budget and tax systems – Yasin managed to save support for aviation and aerospace programs. He greatly contributed to the demise of the financial pyramid schemes that were widespread in the middle of the 1990s. At the same time Evgeny Grigoryevich was a fierce opponent of spending money “on symbolic projects” like the reconstruction of the Church of Christ the Savior in Moscow, destroyed by Stalin in 1920 – he believed that such programs should be implemented either at the expense of the city budget or by private donations. In July 1996, Russian President Boris Yeltsin appointed Yasin a member of Russian Council of Defense.

However, he felt that all these measures would not solve the problems unless the mindset of the authorities changed. “No success is possible until we reform the institutions that govern the economy,” Yasin said in an interview. In 1998 he resigned from the government.

From then on Yasin devoted himself to the creation of educational institutions that would train young people to work under the new economic realities. As Minister of the Economy, Evgeny Grigorievich revitalized the work of the Financial Academy. After his retirement he became the Director of Research at the Higher School of Economics (HSE). The annual April conferences organized by the HSE have become an internationally acclaimed discussion ground for young scientists.

Evgeny Grigoryevich Yasin is an honored professor of Birmingham University and a member of the European Academy of Sciences. In 2005 he became a member of the Russian Public Chamber, a consultative body made up of prominent figures in the country. Yasin is the president of the Liberal Mission foundation, an organization that advocates for the implementation of liberal values in the economy throughout the country.

Evgeny Yasin has been married since 1963. He met his wife Lidya while in university. Their only daughter, Irina, is also an economist. She was the head of the Open Russia foundation set up by the now jailed tycoon Mikhail Khodorkovsky. Today Irina is the vice-president of the Liberal Mission foundation.