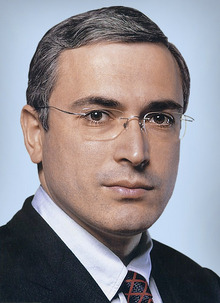 Once Russia’s richest man, Mikhail Khodorkovsky became even more famous after he was sentenced to prison for the biggest tax fraud in Russian history. Khodorkovsky claimed that authorities prosecuted him for political reasons. A large-scale PR campaign was held in his defense, but it has dwindled in the years after the verdict. In 2010 Khodorkovsky was found guilty on fresh charges of embezzlement and money laundering and was given a cumulative sentence of 14 years in prison. But the second trial received much less media attention than the first one.

Mikhail Borisovich Khodorkovsky was born on 26 June 1963 into Moscow to a family of engineers. In 1981, he entered the Moscow Mendeleyev Institute of Chemical Technologies, and in 1986 graduated with a degree in technological engineering. In 1998, he graduated from the Plekhanov Institute of People’s Economy with a diploma in finance. 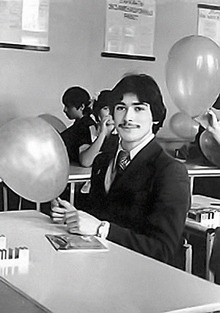 The Frunzensky Komsomol Committee was one of the few organizations that were first allowed to undertake business activities with the start of perestroika. Khodorkovsky was in charge of the committee’s business branch, and later he created and headed an event-management company, the Foundation for Youth Initiative. In 1987, Khodorkovsky, together with his business partner Platon Lebedev, founded the NTTMCenter – officially a sort of business incubator with broad Soviet state support. Two more of Khodorkovsky’s famous partners started to work with him at NTTM – they were Leonid Nevzlin and Vladislav Surkov.

In late 1987, Khodorkovsky and his partners formed a company they called MENATEP (the Russian abbreviation for inter-branch science and technology programs). MENATEP made substantial profits by supplying Soviet organizations with imported computer hardware, local software and all sorts of deals with mass consumption goods. In 1988, Khodorkovsky registered one of the first commercial banks in the country, KIB NTP, and floated its shares, successfully attracting funds from the population.

In 1989, Khodorkovsky was elected board chairman of the KIB NTP bank, and in 1990, he headed the reformed MENATEP bank group, which brought together all his business enterprises in Russia and abroad. In 1990, the bank was renamed MENATEP and another tranche of its shares was released. 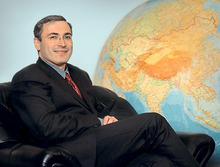 Image from www.c.photoshelter.com by Jeremy Nicholl

In 1990-1991 Khodorkovsky made his first steps in politics by working as an aide to then-Prime Minister Ivan Silaev. The two men got to know each other during the late Soviet times, when Silaev supervised Khodorkovsky’s business activities in the Komsomol. In 1992, Khodorkovsky was appointed to head the State Investment Fund for Assisting the Fuel and Energy Industry, working with the reformist government of Egor Gaidar. In 1993, Khodorkovsky was appointed Deputy Fuel and Energy Minister and in 1993 he worked as a financial advisor to then-Prime Minister Viktor Chernomyrdin. In 1994, he entered the Council for Industrial Policy and Privatization and became Deputy Chairman of this government body. In 1996, Khodorkovsky took part in Boris Yeltsin’s presidential campaign, calling for the union between Communists and pro-Yeltsin democrats. After Yeltsin’s victory, Yeltsin thanked Khodorkovsky for his help during the elections and invited him to join the government, but Khodorkovsky declined. Instead, in 1996, he joined the Banking Council – an advisory board with the government.

Good connections with the authorities helped Khodorkovsky to make his bank an official partner of the state arms trader Rosvooruzheniye and receive interest-free credit of 1 trillion rubles (about US$1 billion) from the government. 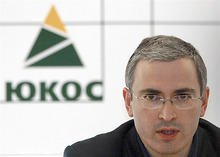 In December 1995, a company controlled by the Menatep group bought a 33 percent stake in Russia’s second-largest oil company, Yukos, at a guarantee auction, paying $150 million in cash and promising to invest about $160 million in the company’s production facilities over the next three years. In 1996, Menatep held a number of stock placements and acquisitions, effectively raising its stake in Yukos to about 90 percent.

In 1996, Khodorkovsky resigned as board chairman of Menatep and concentrated entirely on Yukos, where he became first Vice-President and then Chairman of the Board of Directors.

In February 2003, Forbes magazine named Khodorkovsky the richest man in Russia, with an estimated wealth of $8 billion.

In 1998 Khodorkovsky, for the first time, expressed interest in merging his Yukos oil company with the Sibneft oil company, owned by Roman Abramovich. However, a few months later the deal was frozen for undisclosed reasons.

In 2003, a second merger attempt was held. If it were successful, Khodorkovsky planned to swap the shares of the newly-formed oil company YUKSI for Chevron-Texaco shares, giving the American company access to Russian oil fields. This time the merger went quite a bit further – Yukos received 92 per cent of Sibneft shares in exchange for cash and stock, but the merger was canceled by Roman Abramovich after Khodorkovsky’s arrest and the start of the Yukos case.


Khodorkovsky made a major independent breakthrough into politics during the parliamentary elections in 1999. While officially supporting the right wing and pro-market SPS and Yabloko parties, he also financed communists and independent candidates, acquiring serious weight in the newly formed parliament. In autumn 2000, one of Yukos’ top managers won the gubernatorial election in the oil-rich Evenk Autonomous Region. In 2003, Khodorkovsky sponsored SPS and Yabloko, and tried to persuade the leaders of the two parties to form a bloc of democratic forces, although he did not succeed.

In late 2001, Khodorkovsky established the Open Russia Foundation and became its chairman. The organization was engaged in numerous social and media projects and some experts saw it as an early prototype of a political party.

On 19 February 2003, Khodorkovsky had an open argument with President Vladimir Putin at a session of the Union of Industrialists and Entrepreneurs. Khodorkovsky drew Putin’s attention to thriving corruption in state-owned companies, but in return Putin asked Khodorkovsky if the privatization of Yukos had been entirely just and lawful.


On 25 October 2003 Khodorkovsky was arrested in a rented aircraft as it landed in the city of Novosibirsk for refueling on the way to Irkutsk. He was charged with gross embezzlement and tax evasion and put in pre-trial custody. In November 2003, Khodorkovsky resigned as Yukos board chairman. On 31 May 2005 Khodorkovsky and his business partner Platon Lebedev were found guilty under six articles of the Criminal Code, most importantly of fraud and tax evasion. They were sentenced to nine years in prison each, but some time later the term was reduced to eight years. Khodorkovsky pleaded not guilty to all charges. After the sentence was pronounced, Khodorkovsky was sent to a penal colony near the town of Krasnokamensk in Siberia’s Chita Region. 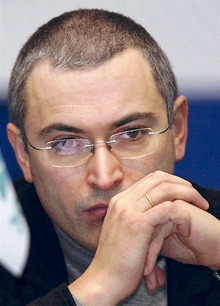 In February 2007, prosecutors brought new charges against Khodorkovsky and Lebedev, and opened a new criminal case. The two men were accused of inflicting financial damage in the amount of over 892 billion rubles (around US$30 billion) to Yukos and laundering over 480 billion rubles ($16 billion) of these funds. In December 2010, Mikhail Khodorkovsky and his business partner Platon Lebedev were found guilty in the second case against them, and sentenced to 13-and-a-half years each. However, under the court’s decision, the seven-and-a-half years they have already served for their first conviction, starting in 2003, are to be subtracted from the new term, and the six months they have remaining of their term in the penitentiary is to be added to it. The pair are to be released in 2017.


Khodorkovsky in the media

The so-called “Yukos case” sparked intense debates in the Russian media and society in general. Right wing politicians, HR activists and media close to the Open Russia Foundation took Khodorkovsky’s side, while state-owned media outlets advocated the authorities’ position. A group of activists even put forward Khodorkovsky’s candidacy in parliamentary by-elections in autumn 2005.

Khodorkovsky has written several resonant articles while in custody, most notable “The Left Turn,” published in August 2005. In it he distanced himself from his rightist views and advocated stronger social policies and a greater state role. In September 2008, Khodorkovsky published an article in which he defended Russia’s actions in repelling Georgia’s aggression against South Ossetia. In November 2008, he published an article saying that the international financial crisis must cause he world to turn to neo-socialism – a system with a strong state role and social guarantees for the masses. In October 2009, Khodorkovsky wrote an article in which he questioned the modernization plans suggested by President Dmitry Medvedev, saying that economic and social changes were not real without abandoning the authoritarian style in politics. 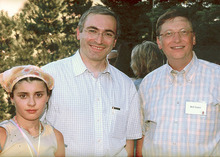 Khodorkovsky has been married twice – the first time was during his institute studies, to a fellow student Elena. In 1985, Khodorkovsky’s wife gave birth to son Pavel, but the marriage did not last long. He married for the second time in 1990. Khodorkovsky’s second wife Inna worked in a junior position in the Menatep bank. In 1991, she gave birth to a girl, Anastasia, and in 1999 to twin boys, Gleb and Ilya.