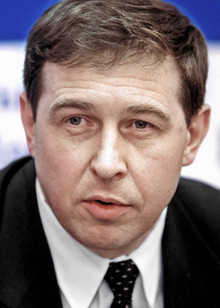 Illarionov was born on 16 September 1961 in Sestroretsk, a resort town next to the Gulf of Finland, in the Saint Petersburg region. His father, Nikolay Plenkin, and his mother ,Yulia Illarionova (he took his mother’s last name), were both teachers.

After finishing high school, the 17-year-old Andrey enrolled in the economic faculty of the Leningrad (now Saint Petersburg) State University. The faculty, which offered the possibility of studying “capitalist economics” produced some of the most influential politicians and businessmen of post-Soviet Russia – one of Andrey’s classmates was Aleksey Kudrin, who went on to become Minister for Finance.

After receiving his undergraduate degree, Illarionov continued his studies in the same faculty. Before tackling his PhD, he spent a year working in the faculty of international economic relations and later taught there for two years after graduation. In 1987 he was awarded the Soviet Union’s equivalent of a PhD in economics, writing his dissertation on government monopolies. While a student, Illarionov also worked part time at a post office.

In Saint Petersburg in the 1980s, and in the Soviet Union in general during the Perestroika period, economists vocally argued over the best approach to economic and market reform. Illarionov took part in many of these debates, supporting the liberal approach advanced by opinion leaders of the time, such as future Deputy Prime Minister Anatoly Chubais. Illarionov was a member of the influential economic forum Sintez.

In 1990 he began working as a researcher. For two years he headed a department of the Regional Economic Research Laboratory at the Saint Petersburg University of Economics and Finance.

llarionov was able to put some of his economic ideas into practice when he joined the Working Centre for Economic Reform of the Russian Government as First Deputy Director in 1992. He worked on reform plans connected to the economic restructuring of Russia after the collapse of the Soviet Union a year earlier.

Economic reforms of the 1990s

There was little consensus in the government on how to proceed with the economic reform. While leading an analysis and planning group for the Council of Ministers from 1993 to 1994, Illarionov clashed with Prime Minister Viktor Chernomyrdin and the chairman of the Central Bank Viktor Gerashchenko. He criticized their handling of high inflation and the plummeting value of the Russian ruble.

On 7 February 1994, Illarionov tendered his resignation, announcing that the Prime Minster had staged an “economic coup.” But just two days later, before the resignation could be accepted, he was fired for “disciplinary” reasons; it was alleged that he had given lectures at a university in England at the beginning of the year without first seeking permission from Chernomyrdin.

Following his resignation Illarionov founded and became head of the Institute of Economic Analysis. In early 1998 he advised the government to perform a gradual devaluation of the ruble, warning that the currency would otherwise crash. Illarionov’s advice was not followed, but his predictions were borne out when the ruble collapsed in August that year, signaling the beginning of an acute stage in Russia’s deep economic crisis. 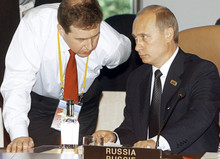 In 2000 Illarionov was appointed Chief Economic Advisor to newly-elected President Vladimir Putin and was chosen as Russia’s representative to the G8. He played a key role in some of the early economic innovations of Putin’s first term, such as the imposition of the flat 13 percent income tax rate and the creation of the Stabilization Fund to safeguard windfall revenues from natural resources. At the same time, he was not afraid to voice disagreements with the authorities, frequently criticizing the government’s incipient energy reform.

Over several years his views grew further apart from those of the government and his influence on policy waned. He finally resigned his official positions in 2005, saying, "It is one thing to work in a country that is partly free. It is another thing when the political system has changed, and the country has stopped being free and democratic."

Andrey Illarionov has been a long-standing opponent of the theory of man-made climate change. As Chief Economic Advisor to Vladimir Putin he unsuccessfully campaigned for Russia to reject the Kyoto Treaty, claiming it would severely damage the country’s economic prospects.

In December 2009 there was a controversy over data manipulation at the Climate Research Unit of the University of East Anglia (CRU). The Institute of Economic Analysis, headed by Illarionov, published a paper claiming CRU cherry-picked meteorological station data to demonstrate an exaggerated pattern of temperature rises on Russian territory.

Illarionov has become one of the most outspoken critics of Russia’s political system. He has used his frequent public speaking engagements and newspaper columns in leading Western media as a platform to attack the Russian government for corruption, meddling and squandering economic opportunities afforded by historically high oil and gas prices.

He was a fierce critic of the Yukos case and subsequent imprisonment of Mikhail Khodorkovsky and his partner Platon Lebedev.

He is often called on by the media to comment on the political and economic situation in Russia.

Since 2006 he has been a Senior Fellow at the libertarian Cato Institute in Washington, and has published three books and more than three hundred articles.

Illarionov is married to a U.S. citizen, with whom he is raising their two children.