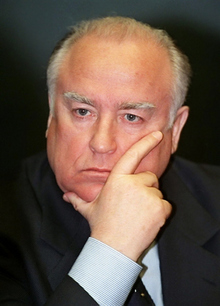 Viktor Chernomyrdin slowly and tenaciously worked his way up from a machine operator in an oil processing factory to become Prime Minster of Russia – and it was his very tenacity and resistance to change that made him a reassuring political anchor and a frequent compromise candidate during the hectic post-Soviet reforms of the early 1990s. His stake in Gazprom, where he was chairman on-and-off until 2000, has, by some estimates, been valued at a billion dollars, making him one of Russia’s richest men. From 2001 to 2009 he served as Russia’s ambassador to Ukraine, and then as an advisor to Russian President Dmitry Medvedev from June 2009 up until his death.

Viktor Chernomyrdin was born into a family of five children in the village of Cherny Otrog in what is now Orenburg Oblast in southern Russia. His father was a bus driver. Viktor finished school with modest results and, following his obligatory military service, began to work as a welder and a machine operator in an oil processing plant in nearby Orsk.

Meanwhile young Chernomyrdin began working with the local branch of the Communist Party, and spent several years in their regional offices.

He then continued his education, training as an engineer at what is now Samara State Technical University, and then graduated from Moscow State Open University in 1972 with a degree in economics.

His new qualifications allowed Chernomyrdin to jump-start his career, and he became the director of the Orenburg gas refinery.

In 1982 Chernomyrdin was awarded a Ph.D. for a thesis on new methods of gas refinement. That same year he was appointed Deputy Minister of Natural Gas Industries and three years later became the Minister.

The Ministry of Oil and Gas became Gazprom in 1989 during the period of government restructuring known as “perestroika” and Chernomyrdin was elected as its chairman. Under his leadership, Gazprom became one of the most successful state owned mega-companies to emerge from the turmoil of the early 1990s. Gazprom quickly mushroomed to acquire media holdings and become an influential player in Russian politics.

Chernomyrdin first met Boris Yeltsin, the president of Russia from 1991 to 1999, in the 1980s. Yeltsin was then a regional Communist Party chairman. In 1992 Yeltsin appointed Chernomyrdin as Deputy Prime Minister with responsibility for fuel and energy. 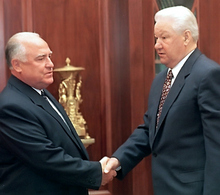 In 1992 Boris Yeltsin, then President of Russia, nominated the economic reformist Yegor Gaidar as Prime Minster, but the Congress of People’s Deputies, the supreme governing body, refused to approve the nomination. Chernomyrdin was selected as a compromise candidate. As Chernomyrdin preferred more gradual reforms, he was more favorable to the conservative Congress.

U.S. Vice-President Al Gore and Chernomyrdin agreed to co-operate in building the International Space Station, symbolically ending the half-century long “space race.” American astronauts were invited onto the Mir Space Station, while Russian cosmonauts boarded Shuttle missions in preparation for the joint venture. A series of committees known as the Gore-Chernomyrdin Commission were set up to promote co-operation between the two countries. The Commission outlived Chernomyrdin’s term as Prime Minister. Bill Clinton in 1997 credited the Commission for greatly improving U.S-Russian relations.

Prime Minister Chernomyrdin earned popular support for securing the release of some 1500 hostages held by Chechen terrorists in January 1996. The negotiations were a turning point in the First Chechen War.

While Boris Yeltsin underwent a heart operation in November 1996, Chernomyrdin was acting president by special decree for 23 hours.

Chernomyrdin was criticized for dragging his heels on economic reforms. In a surprise move in March 1998 he was dismissed by Yeltsin, along with much of the government administration.

In August 1998, when Russia was battered by an economic crisis, his replacement as Prime Minister, Sergey Kiriyenko was widely considered not up to the job. Yeltsin tried to bring back Chernomyrdin, even hinting that he might support his bid for President, but the attempt was blocked by the Duma (parliament).

Chernomyrdin was elected as a Duma member in December 1999, as leader of the “Our home is Russia” political bloc, which he had set up in 1995. The bloc later merged into the United Russia Party.

When the Kosovo Conflict flared in 1999, Yeltsin sent Chernomyrdin as a special envoy to the former Yugoslavia. He remained there until 2001 and was nominated for the Nobel Peace Prize for his efforts to solve the crisis.

Upon his return to Russia, Chernomyrdin again took the reins of energy giant Gazprom. 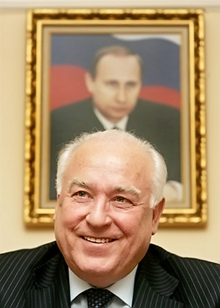 For eight years (2001-2009), in exception to the usual rotation system for diplomats, Chernomyrdin served as Russia’s ambassador to Ukraine. He was critical of the Kiev government, and loudly voiced Russia’s concerns during the “Orange Revolution” and its aftermath. On more than one occasion, his comments, such as “they fight like cats and dogs,” referring to the President and Prime Minster of Ukraine, earned him official rebukes from Kiev.

Despite his long term as Ambassador, Chernomyrdin is famous for his colorful language, and decidedly un-diplomatic style of speech. A phrase used by Chernomyrdin to describe Russia’s efforts to manage economic reforms became a popular aphorism “We wanted the best, but it turned out the same as always.” “We wanted the Best” is also the title of a biography of the former Prime published in 2008.

In 1999, at the age of 71, Chernomyrdin became a special advisor to the Russian president in the area of economic co-operation with the CIS, the organization of former Soviet Union states.

Chernomyrdin was highly decorated with state honors for his work in the Communist Party as well as for his role as Prime Minister and various governmental and diplomatic posts in the Russian Federation. In 2009 Russian President Dmitry Medvedev presented him with the highest level Order of Merit for the Fatherland.

Viktor Chernomyrdin was married to Valentina. The couple had two sons, both of whom have business interests in the oil and gas industry.