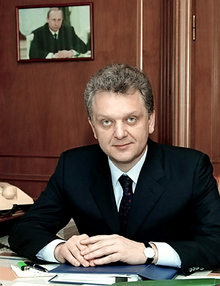 Viktor Khristenko was the Minister of Industry and Trade of the Russian Federation in 2008-2012.

During his long political career he has served as Deputy Prime Minister and held economics and finance portfolios in various Russian governments, making him one of the most capable “survivors” of Russian politics.

Viktor Borisovich Khristenko was born on 28 August 1957 in Chelyabinsk, just beyond the Ural Mountains. His family had a long history of clashes with Communist authorities. Before Viktor was born, one of his grandfathers had been executed and the other had served a long sentence in a labor camp. Viktor’s mother allegedly plotted to break her father out of the camp where he was being held. A childhood dotted with run-ins with the ruling regime could not have failed to make an impact on Khristenko in later life. He was to become a forward-looking, innovative economist and was among the first wave of non-Communist politicians in post-Soviet Russia.

When he was fifteen, Khristenko joined his father on the construction site of an oil pipeline. He continued to study and after graduation he entered university where he trained as a specialist in economics and construction. He was a good student and it was partly his success at university that saved his family from being forced to relocate a few years later. His family found themselves on a list of households that were to be moved out of the city but letters from his employer and the university convinced the authorities to change their minds. 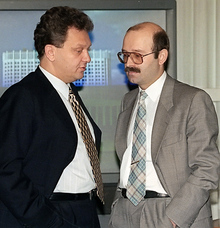 Khristenko met his first wife, Nadezhda, in college. They married in 1979 after graduating and moved with Khristenko’s parents into a crowded three-room apartment. The newlyweds also shared the flat with two of Khristenko’s grandparents and his aunt’s family from his mother’s side.

Khristenko soon began working as a research engineer. One of his specialties was the developing field of computer technology. He continued his academic studies in the Moscow Institute of Management.

Back in Chelyabinsk, Khristenko began making a name for himself on local television, where he presented an economics program that explained basic financial concepts to television audiences. The time was right for educating people about economics – in the late 1980s Communism was collapsing in Russia and millions of ordinary people were about to get a crash course in capitalism.

In March 1990 Khristenko made his first foray into politics. He was elected as a member of the Chelyabinsk city council. He presented ambitious plans to develop the city and reform its politics.

In Chelyabinsk Khristenko actively worked in the background and shied away from the public spotlight, something he would continue to do throughout his career. This won him the support of the city and government elites, if not public fame. By many accounts he was a close political ally of Vadim Solovev, the city governor. 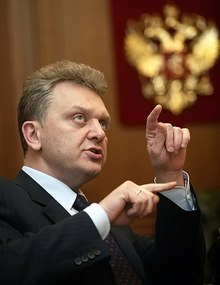 In 1996, Russian President Boris Yeltsin made Khristenko his envoy in Chelyabinsk and put him in charge of his election campaign in the region. Khristenko has been criticized for using heavy-handed tactics against the local media during the campaign, which netted Yeltsin a higher-than-average percentage win in the district. After the electoral success, Khristenko became chairman of the regional commission for television and radio broadcasting.

That same year Khristenko became the focus of media scrutiny after the discovery of budget irregularities in the Fund for the Protection of Private Investment, which he had ultimate control over. Over half of the 670 million rouble fund was reported missing.
Khristenko retired from public life for a year and returned in 1997 as the president’s representative in Chelyabinsk. Later that year he also became a Deputy Minister of Finance in Viktor Chernomyrdin’s government. In 1998 he was given the position of Deputy Prime Minister in the new Sergey Kirienko government, tasked with economic reform and the continuing privatization of state-owned industries. He continued to involve himself in all areas of economics but managed to avoid any negative backlash after the catastrophic rouble default in August 1998.

In the new government led by Evgeny Primakov, sworn into office in October 1998, Khristenko again took the deputy finance portfolio. In May 1999 the prime minister was changed again, this time with Sergey Stepashin taking the reins, and Khristenko serving as First Deputy Prime Minister.

As the office of prime minister changed hands rapidly, Khristenko was tipped as a possible candidate by analysts who noted his persistence in the otherwise chaotic government shake-ups.

With the election of Vladimir Putin as president of Russia in 2000, the government began to stabilize somewhat and Khristenko served for a longer stretch as Deputy Prime Minister to Mikhail Kasyanov, in charge of economic and financial affairs.

Khristenko served as Acting Prime Minister for a short time when Kasyanov and his cabinet were fired by President Putin on 24 February 2004. 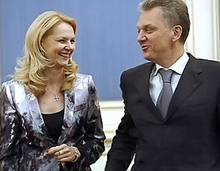 In the new government, with Mikhail Fradkov at its helm, Khristenko became Minister of Energy and Industry. He began simultaneously serving on the board of directors of state-owned energy companies, such as Gazprom and Transneft. With the Yukos scandal gaining momentum, accusations that the Russian government was wresting control of energy infrastructure from private stakeholders began to emerge. Khristenko, along with other high-level government officials, was on a number of occasions the target of legal proceedings mounted by Yukos lawyers.

Khristenko has played a key role in planning the Russian government’s future energy security, including often controversial projects to exploit reserves in the Far East and the Arctic Shelf.

Following a cabinet restructuring in 2008, Khristenko became the Head of the Ministry for Industry and Trade under Prime Minister Vladimir Putin and left the office in January, 2012.

Khristenko is married to Tatiana Golikova. After divorcing his first wife, the pair married in 2003 when he was Deputy Prime Minister and she was Deputy Finance Minister. Khristenko has three children from his first marriage.