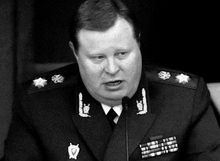 Vladimir Ustinov was born in the town of Nikolayevsk-on-Amur (Russia), into the family of a public prosecutor. In 1978 Ustinov graduated from the Kharkov Law Institute and began his career as a trainee in public prosecution bodies. He occupied a number of posts before becoming the Prosecutor of the city of Sochi in 1992 and the First Deputy Prosecutor of the Krasnodar Region in 1994.

In 1997 Vladimir Ustinov was appointed Deputy Prosecutor General of Russia. From 1998 to 1999 he was the head of one of the chief administrations of the Prosecutor General’s Office, in charge of the supervision of the North Caucasus, overseeing compliance with federal security and international relations laws.

From 2000 to 2006 Vladimir Ustinov held the post of Prosecutor General of Russia. During this time he conducted a reform of the Prosecutor General’s Office, changing the structure of the department and cutting down the number of posts. 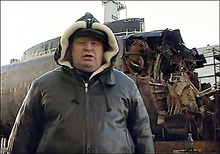 In August 2000 Ustinov headed the investigation into the explosion of the Russian nuclear submarine K-141 Kursk in the Barents Sea that led to the death of 118 sailors and officers. A few years later, in 2004, Ustinov published his book “The Whole Truth About Kursk.” According to some experts, the book describes the accident and lists possible reasons for the tragedy, but does not unveil the results of the investigation. The criminal case of the Kursk submarine was closed in 2002 due to the “absence of crime in the act.”

In 2000 Ustinov took an active part in the investigation of the case of Vladimir Gusinsky, a Russian media baron and the founder of the holding Media-Most. Gusinsky was charged with fraud in the amount of US$10 million. Ustinov explained the necessity for fast-tracking this criminal procedure, saying that Russia needed to confirm its commitment to the Council of Europe Convention on Laundering.

During this investigation Ustinov had to justify the involvement of OMON forces (a special police squad) that conducted searches in Gusinsky’s offices. Another scandalous situation appeared after the NTV television network, founded by Vladimir Gusinsky, accused Vladimir Ustinov of the non-payment of taxes related to a 400 thousand dollar apartment which had been given to Ustinov by Pavel Borodin, the head of the Presidential Property Management Department. NTV insinuated that Vladimir Ustinov had been given this property for closing a criminal case against Borodin, who was charged with extensive bribery.

In February 2001 Vladimir Putin ordered the Government Accountability Office to check Ustinov’s acquisition of the apartment, with the resulting inspection finding no illegal dealings. Vladimir Ustinov subsequently sued the NTV network and won the case. 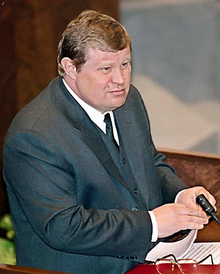 Another widely discussed aspect of Vladimir Ustinov’s activity as Prosecutor General was his work related to the anti-terrorist operations of Russian armed forces in the North Caucasus. In 2000 Ustinov raised the question of crimes committed by Russian troops and later the Prosecutor General’s Office initiated 207 criminal proceedings against servicemen who fought in the North Caucasus.

Vladimir Ustinov interfered in the case against a colonel, Yury Budanov, having thrown doubt upon his criminal insanity. The findings of the court were changed and Budanov was found guilty of murdering a civilian woman and was sentenced to ten years imprisonment.

Ustinov set an example to the heads of public prosecutor's offices, personally supporting official prosecutions in high profile cases. Thus, in 2001, he was the state accuser in a lawsuit with regard to the case of Chechen terrorist Salman Raduev. In 1996 Raduev, together with a group of separatists, caused a massive hostage crisis in the town of Kizlyar and the destruction of the village Pervomayskoye.

In July 2001, during another terrorist operation in the city of Nevinnomysk, a Chechen armed man took the passengers of a bus hostage. Ustinov, together with the Presidential Envoy Viktor Kazantsev, offered himself to the terrorist in exchange for all the hostages. This proposition was rejected and eventually the terrorist was killed by a sniper.

At various times Ustinov has made statements about the intention of the Prosecutor General’s Office to continue a criminal prosecution against Yulia Timoshenko, the former head of the company United Energy Systems of Ukraine, who later became the Prime Minister of Ukraine. Timoshenko is charged with bribing Russian Defense Ministry officials.

In 2003 Vladimir Ustinov, as Prosecutor General, started an active attack on the head of the oil company Yukos, Mikhail Khodorkovsky. In October 2003 Khodorkovsky was arrested on charges of misappropriation and non-payment of taxes. The General Prosecutor suggested he should pay the arrears out of his private funds, but Khodorkovsky refused. In May 2005 Mikhail Khodorkovsky was found guilty and sentenced to eight years in prison. Platon Lebedev, Khodorkovsky’s business partner and a former CEO of Group Menatep, was convicted the same month and received a nine-year prison term for tax evasion.

In 2005 Vladimir Ustinov voiced support for the renewal of the institution of confiscation in criminal law, as a part of the fight against corruption. The corresponding bill, submitted by the Prosecutor General’s Office, was passed by the Russian Parliament in 2006. 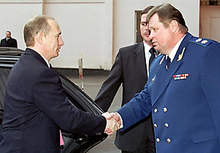 In 2001 Russian President Vladimir Putin issued a non-public decree to award Vladimir Ustinov with the highest honorary title of Hero of the Russian Federation. A few years later the award was confirmed officially, having previously caused a number of speculations in the mass media. For his anti-terrorism efforts and consolidation of legality and law and order, Ustinov is also a three-time recipient of the Man of the Year title initiated by the Russian Biographic Institute.

In June 2006 the Federation Council of Russia complied with the request of Russian President Vladimir Putin to dismiss Vladimir Ustinov from the post of Prosecutor General. According to the President, the request was made on Ustinov’s personal wish, but the mass media readily suggested several other reasons for this dismissal.

One month later Putin appointed Vladimir Ustinov Minister of Justice, having mentioned in his speech that he didn’t have any complaints about Ustinov’s work as Prosecutor General.

In May 2008 Ustinov was appointed Presidential Envoy to the Southern Federal District of the Russian Federation.

Vladimir Ustinov is married and has a son and a daughter.