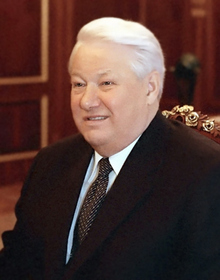 The man who put an end to the USSR was raised to power by Mikhail Gorbachev. Ironically, he went on to depose his mentor and destroy his empire, becoming the first president of the post-Soviet Russia.

Boris Yeltsin was born on February 1, 1931 in the village of Butka, near Sverdlovsk (now Yekaterinburg), in the Urals, in a peasant family. His father spent several years in Stalin’s labour camps accused of anti-Soviet agitation – Yeltsin only joined the Communist Party in 1961, during Khrushchev’s anti-Stalinist reforms. In 1955 he graduated from the Ural Polytechnic Institute (now Ural State Technical University) with a degree in construction and started his first job on a building site the same year. Working in construction, he eventually grew to the head of an integrated house-building plant. In 1968, aged 37, he embarked on a party career but it wasn’t until Mikhail Gorbachev’s rise to power that he’s got his big break.

Hand-picked by Gorbachev to shake up the corrupt Moscow party hierarchy,Yeltsin proved to be an eager and energetic reformer. His rise through the ranks went meteoric but he soon grew weary of the pace of “perestroika” and fell out with Gorbachev, eventually quitting the Communist Party at a party’s congress in 1990. A year later he emerged as the first elected president of the Russian Federal Republic within the USSR.

The make or break moment came in August 1991. Gorbachev’s policy of “glasnost” spurred on the long-suppressed nationalist feelings in the Soviet republics, while many within the Communist party grew disappointed with Gorbachev’s reforms. Finally, the party hardliners had had enough. With Gorbachev on vacation in the Crimea, they attempted a coup. The Soviet leader was put under house arrest for three days.

Back in Moscow, troops surround the White House – the parliament building, now home to the Russian government. Yeltsin spearheaded the resistance. Condemning 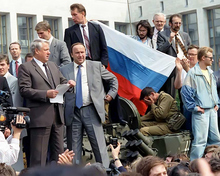 the coup, he climbed on a tank and rallied mass opposition, turning into a popular hero. The coup was effectively deflated and Gorbachev returned to Moscow but support had already swung over to Yeltsin.

Things were spinning out of Gorbachev’s control. In November, Yeltsin signed a decree banning the Communist Party in Russia. In early December, Ukraine voted for independence from the Soviet Union. A week later, on December 8, 1991 Yeltsin held a secret meeting with the presidents of Ukraine and Belarus in the Belarusian Belovezh Forest. Their so-called Belavezha Accords declared the Soviet Union dissolved, replacing it with the Commonwealth of Independent States (CIS). Facing the inevitable, Gorbachev resigned on December 25, 1991. Two days later, Boris Yeltsin moved into Gorbachev’s former office, taking the reins of the new Russia.

Yeltsin came to power on a wave of optimism, hailing a new era of democracy and economic freedom. Instead, the country plunged into chaos. Just days after the USSR’s dissolution, the government embarked on a series of unprecedented reforms along the lines of “shock therapy”. A shift towards market-oriented economy and massive privatisation shook a country that was used to state control to the core. The wild-west capitalism meant poverty for many and staggering wealth for the few, as well as crippling economic depression, soaring inflation and rampant crime and corruption. Salaries weren’t paid and many pensioners saw their lifelong savings wiped out. The reforms soon became widely resented, seen as “shock without therapy”.

In 1993, a deadlock with the increasingly frustrated legislators pushed the country to the verge of civil war. Yeltsin’s opponents barricaded themselves in the White House and moved to take control of Moscow’s television centre. Yeltsin called in the tanks – and managed to shell his way out of the conflict. A parliamentary election was held and a new Constitution, concentrating power in the hands of the President, was approved in a referendum.

The tanks though were needed again in 1994 when the southern republic of Chechnya tried to break away. Yeltsin sent in troops, pledging to crush the resistance in days, but the botched operation grew into a bloody war.

By the 1996 presidential election, Yeltsin’s career seemed doomed. His popularity ratings dropped to an all-time low while the newly-revived Communist Party enjoyed a surge in support. 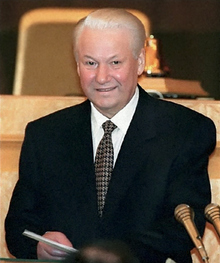 Surprising many, Yeltsin put on an energetic campaign, promising to abandon some of his most unpopular economic reforms and to end the Chechen war. Facing a fierce competition from the Communists leader Gennady Zyuganov, Yeltsin narrowly won the ballot in the second round in June. In August a peace with Chechnya was negotiated.

Despite this astonishing political comeback, Yeltsin was a spent force. Later that year, he underwent an emergency heart bypass surgery that left him in hospital for months. Bouts of ill-health, a disastrous financial crisis in 1998 and hectic government reshuffles that followed took their toll. On New Year’s Eve 1999, Yeltsin surprised his country and the world by announcing his resignation, leaving the power in the hands of the little-known Prime Minister Vladimir Putin.

Often ill-at-ease with protocol, Yeltsin was remembered for his gaffes and off-hand jokes. Thought to have been a result of alcohol abuse, his antics attracted worldwide attention. Yeltsin famously grabbed a conductor’s baton in Berlin and tried to sing along with the orchestra. In another celebrated incident, he failed to emerge from his plane at Shannon Airport for talks with Ireland’s Prime Minister. After his resignation Yeltsin made few public appearances, making an exception only for tennis tournaments. A big fan of the sport, he’d energetically cheer on Russian players. 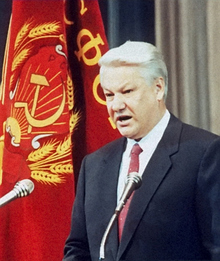 Boris Yeltsin died of heart failure on April 23, 2007, aged 76. His funeral service at Moscow’s Cathedral of Christ the Saviour was the first sanctioned by the Church for a head of state for more than a hundred years. As Yeltsin’s body lay in state, thousands gathered to pay their last respects. Many didn’t hide their tears. Post-Soviet Russia has never before buried its leader and the Communist past was left well behind. Unlike most Soviet leaders, laid to rest by the Kremlin wall, Russia’s first President was buried at Moscow’s Novodevichy cemetery, a resting place of many prominent artists, scientists and politicians. Yeltsin is survived by his wife Naina and daughters Yelena and Tatyana.

Boris Yeltsin guided Russia through a time of great change and challenge. After decades of Communism, when Russia and the USSR were often seen as one and the same, the 1990s were the time of forging a new identity and restoring traditions. Yeltsin’s Russia saw a huge religious revival, many churches destroyed during the Soviet times were rebuilt and religious holidays were once again back on the calendar. The country went through a true media boom, enjoying greater political and civic freedoms than it had ever known, and carved itself a place among the world’s most industrialised democracies, turning G7 into G8. 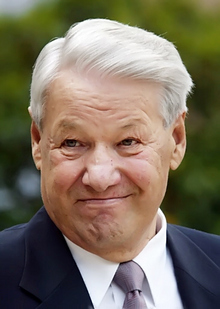 Many blame Yeltsin for demising the Soviet Union, ruining the economy and plunging millions into hopeless poverty. Yet, others credit him with bringing the country a breath of fresh air as he ended more than 70 years of Soviet Communism. The architect of modern Russia, he’s praised for leading Russia onto the path to democracy and opening it to the world. Boris Yeltsin may have left a controversial legacy, but he has unquestionably written his name into Russia’s history.

Yakov Sverdlov Yakov Sverdlov was one of the key figures behind the 1917 Bolshevik Revolution, an ally of Lenin, and the official head of the Russian Soviet Federal Socialist Republic for a short time.