He got an “F” in mathematics in the entry exams to Moscow State University, but counting is probably what he does best these days. Especially counting money and profit…

Boris Berezovsky is a well-known businessman and media tycoon, whose name emerges in connection with almost every notable event in Russia’s modern history. He’s famous for his harsh criticism of Vladimir Putin, which he regularly sends from Great Britain, the country that granted him political asylum. He’s been repeatedly accused of money laundering and massive embezzlement, with at least 11 criminal cases launched against him in Russia, and 6 arrest warrants issued in Russia and Brazil.

In his book Godfather of the Kremlin: Boris Berezovsky or the Looting of Russia, the prominent Russian-American journalist Paul Klebnikov portrayed Berezovsky as a mafia boss, whose rivals were all murdered. The respected editor of Forbes Russia described Berezovsky as a man who “had risen out of nowhere to become the richest businessman in Russia and one of the most powerful individuals in the country", calling his story “a story of corruption so profound that many readers might have trouble believing it”.

In 1996, Forbes magazine published fragments from the book. In an article under the same title - Godfather of the Kremlin? – Boris Berezovsky, then Russia’s Security Council deputy secretary, was accused of being involved in the murder of prominent Russian journalist Vladislav Listiev. The irritated Berezovsky sued Forbes for libel and asked for disproof via England’s Supreme Court. In 2003, the sides reached an agreement in lawsuit, and Forbes admitted that the accusations against Berezovsky were ungrounded.

In 2004, Paul Klebnikov was murdered.

Berezovsky has always stressed his Jewish origins, although under Jewish law he is not a Jew, as his maternal grandmother was not Jewish. However, aged 47, he got Israeli citizenship and became an orthodox Christian a year later.

Boris Berezovsky was born in the year after the end of World War Two, to an engineer and a nurse. Leaving school in 1962, the future businessman wanted to enter the Physics faculty of Moscow State University, but flunked the math exam.

Berezovsky has repeatedly emphasized that this wasn’t a matter of knowledge but rather a matter of his ethnicity: he believed that Jews were not welcome in the country’s most prestigious education institutions.

Against his wishes, Berezovsky entered Moscow’s Forestry Engineering Institute. For almost 20 years after graduating, he worked as an engineer in the positions of assistant research officer, research officer and, finally, head of department in the Institute for Problem Management of the USSR’s Academy of Sciences. He’s never stopped working in mathematics, earning his doctorate at the age of 37.

Between 1975 and 1989, Berezovsky did research on optimization and control theory, writing 16 books and over a hundred articles. These were translated into many languages and published in the US, Japan, Germany, France and Great Britain.

With his academic potential, Boris Berezovsky could have become one of the country’s most prominent scientists. But Perestroika changed his life forever and determined his future as a businessman. In just 5 years, he became a millionaire.

From an interview to the First Post, "In the early 1990s, Berezovsky explained he went to Germany, bought old Mercedes saloons at 700 Deutsche marks (about 500 dollars) a pop, then sold them in Moscow for 25,000 dollars, "Not a bad profit!" He returned to Germany with 10 friends, and built an empire."

In 1989, Boris Berezovsky founded his own company, LogoVAZ. Just two years later, it became the official distributor of Mercedes cars in Russia. In 4 years, the company became one of the biggest private enterprises in Russia, with turnover exceeding 250 million dollars.

Berezovsky also initiated a “people’s car” project: he wanted to create a true public car, a small and fuel-efficient Russian car for everybody. He set up the Automobile All-Russia Alliance “AVVA” (“ABBA” in Russian Cyrillic). But this initiative ended up as a total fiasco: Berezovsky’s dream of making affordable vehicles collapsed.

The year 1994 became a turning point for Boris Berezovsky: it brought an attempt on his life. The attack was so professionally organized that he should have died. But he didn’t. A car bomb decapitated the chauffeur of his Mercedes-Benz, while Berezovsky himself was not even injured.

This proved like a re-birth for the businessman: it changed his life dramatically, pushing him into big politics. He believed this was the only way to guarantee his own security. 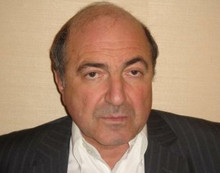 Berezovsky appeared on the political arena at the time of Boris Yeltsin’s presidency, in 1994. In just 2 years, he acquired much influence within the Kremlin walls and became a member of Yeltsin’s inner circle or "family". He owes much of his success to his friendship with Boris Yeltsin's daughter Tatyana Dyachenko. Aleksandr Korzhakov, former head of Yeltsin’s security, says Berezovsky “simply cracked her passion for rich presents” and each new gift, be it jewelry or a car, took him closer to Russia’s movers and shakers.

Berezovsky’s status in political circles made it easier for him to run businesses. This time, he chose oil and media, the most influential things in the modern world. He took ownership of the Sibneft oil company together with Roman Abramovich, and became the main shareholder (49 %) in the country's main television channel ORT (now the First Channel, Pervy Kanal) and TV-6 (Moscow Independent Broadcasting Corporation), one of Russia’s first private TV channels.

He used his media resources in the run-up to the 1996 presidential election to promote Boris Yeltsin, and was granted the post of deputy secretary in Russia's Security Council.

Following Vladimir Putin’s ascent to the Russian presidency, Berezovsky’s relations with the authorities began to deteriorate. He, the man who, Kremlin insiders said, had “opened all the doors with his left foot”, found himself instantly removed from the Kremlin decision makers.

The first big disagreement was related to Putin’s power centralization reform – to which Berezovsky was strongly opposed. He made no secret of his feelings on the matter.

The last straw was the critical coverage of the Russian Kursk submarine tragedy by ORT television. Berezovsky’s channel harshly criticized the authorities and president Putin personally.

In 2000, Boris Berezovsky sold his ORT shares and fled the country.

He came to London in 2001, where he was granted political asylum, something the Russian authorities were not happy about. He has been charged with fraud and political corruption, but British courts have rejected all three attempts to get him extradited to Russia. In the UK, Berezovsky even got a new name. In 2003, he was issued new documents in the name of Platon Elenin by Britain’s Home Office. Berezovsky has explained he borrowed the name Platon from the main character of the Russian movie Tycoon. Symbolically, the author of the book the movie was based on, Yuly Dubopv, also got political asylum in Great Britain. The last name was taken from his wife Elena. In December 2003, he even traveled to Georgia under his new identity, something that lead to tension between the two countries.

From his new home in the UK, Boris Berezovsky aka Platon Elenin has strongly criticized the current Russian administration.

Criminal allegations at home and abroad

Berezovsky has repeatedly been accused of financial crimes, with a number of criminal cases opened against him and arrest warrants issued in different countries - something he’s always called a provocation.

He’s been investigated by the Swiss financial authorities since 1999 for money laundaring and membership of a criminal organization. In 2003, the Swiss General State Prosecutor opened a criminal case against him. While it’s never been closed, Berezovsky has always argued the proceedings were motivated by anti-Semitism.

In 2007, a Moscow court found Berezovsky guilty in absentia of massive embezzlement. He was sentenced to six years in jail and ordered to repay the $9 million that the court said he had stolen from the state airline Aeroflot.

Later the same year, an arrest warrant was issued by a Brazilian court for Berezovsky (and a number of other British and Brazilian suspects) in connection with an investigation against the Media Sports Investments group, suspected of money laundering. The warrants were quickly forwarded to Interpol. Berezovsky himself has dismissed the Brazilian investigation as a part of the Kremlin's "politicized campaign" against him.

Two years later, in June 2009, Boris Berezovsky was convicted on another charge of stealing 5,500 cars from the state automobile company AvtoVaz in 1994, and sentenced in absentia to 13 years of imprisonment. His appeal was rejected.

Berezovsky has also been accused by Russian authorities of being involved in the murders of several leading critics of Putin's regime, including Alexander Litvinenko and journalist Anna Politkovskaya, allegedly in an attempt to destabilize the country and discredit Putin. In response, Berezovsky has attributed the killings to the Putin regime as a means of political intimidation.

Boris Berezovsky is married to his third wife, and has 5 children. ­­­