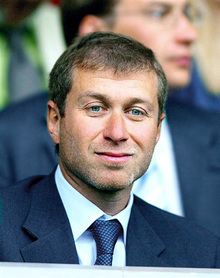 Orphaned at the age of three and brought up by relatives in a remote area of northern Russia, following compulsory military service he’s said to have dropped out of university. It’s not exactly the recipe for mind-blowing business success, yet Forbes currently ranks Roman Abramovich as the 15th richest man in the world. He has been involved in dozens of projects, ranging from pig farming to selling toys.

Yet it was his involvement in the oil industry which secured his position as one of Russia’s so-called ‘new rich’. Since then he’s gained recognition not only as a business tycoon, but also as the owner of the Chelsea football club in London and as the governor of the Chukotka region in Russia. More intriguing yet is his skillful ability to keep out of the public eye. Despite his influential status, details of his biography, the size of his wealth and his private life remain a mystery.

Little Roma was born into a Jewish family of Latvian origins in the southern Russian city of Saratov. During the Second World War his grandfather and grandmother were forced to leave Latvia, only to be repressed in the USSR. Abramovich’s mother, a musician, died from a back-street abortion when he was only 18 months old. When he was three, his father died in an accident at a construction site where he worked as a supplier. 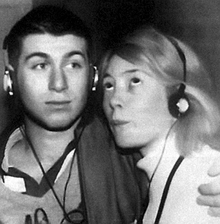 Roman was raised in his uncles' families, living first in Ukhta, in the Komi Republic, and then in Moscow. He attended simple state schools and was, at best, an average student. Information on his university education is controversial. Some sources suggest that he attended the Ukhta Industrial University, while others point to The Gubkin Russian State University of Oil and Gas in Moscow.

Both universities deny his attendance. In Abramovich’s official biography it is stated that he graduated from the Moscow State Law Academy in 2001, but rumours still circulate that he dropped out.

The business career of the future tycoon began when he finished his conscription service in the Soviet army. At the peak of perestroika, Abramovich sold imported rubber ducks from his Moscow apartment. Some sources suggest that the ducks were imported illegally, but no evidence of this exists. It was his first wife, Olga, or rather her parents, who truly allowed Abramovich to get his ducks in a row. The couple's marriage didn't last long (they divorced in 1991), but the wedding present of 2,000 roubles allowed him to expand his stock, and soon he was selling deodorant and perfume.

It was also in 1991 that Abramovich met his second wife, Irina, an air hostess at the time. Their story resembles a fairy tale. At the start of their marriage, the couple lived in Irina's mother's flat. By the time of their divorce in 2006, they had several multi-million-dollar homes all over the globe.

The tycoon's investment in 1991 proved to be highly profitable and, making good use of the revenue, by 1995 Abramovich had opened five different companies, specialising in everything from oil to pig farms. In 1993, during a meeting of Russian businessmen in the Caribbean, Abramovich met Boris Berezovsky, who quickly became his guide into the world of international oil.


It was together with Berezovsky that Abramovich gained access to the close circle formed around Russia's first president, Boris Yeltsin . By 1996 Abramovich was living in the Kremlin, allegedly endorsed by Yeltsin's daughter, Tatyana Dyachenko, and her husband, while also funding lobby groups and election campaigns. 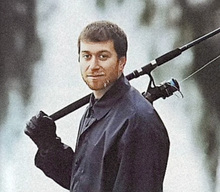 It was also together with Berezovsky that Abramovich managed to gain full control of the previously government-owned oil giant Sibneft. They paid £50 million for half of the company and rapidly turned it into billions. With hindsight, market analysts suggest that the true value of the company was much larger than what Berezovsky and Abramovich paid for it.

Yet, at the time, they were operating completely within of the laws of privatisation. It was Sibneft that provided Abramovich with most of his wealth and brought him to the international market.

In 1999 Abramovich became the governor of the Chukotka region in Russia’s Far East, winning 92% of the votes. The eight years he spent as governor of the region, like so many aspects of his life, were controversial. He invested a substantial amount into the development of Chukotka, undoubtledly raising the standard of living there. However, he was criticised for not spending enough time in the region (he was mostly living in the UK by then).

Abramovich liquidated most of his assets from 2003 to 2008 and stepped down from his governor post in early July 2008. Forbes currently estimates his wealth at roughly $23.5 billion. He is the main owner of the private investment company Millhouse LLC, has various properties around the globe and is classified as the world's greatest buyer of luxury yachts. The London football club Chelsea, which Abramovich bought in 2003, is one of his most famous assets. He is also reported to have the largest security force in the business world, amounting to over 40 private 'soldiers'. 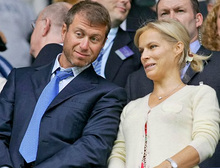 In 2006, Irina, Roman's second wife, discovered her husband's involvement with the 23- year-old Russian model and heiress, Daria Zhukova. What followed was one of the most expensive divorce settlements in history. The couple is said to have separated “amicably” after 15 years of married life. As a result of the divorce, Irina gained custody of their five children, aged, at the time, from 9 months to 12 years. She also became the proprietor of four impressive UK homes and recieved an unstated, yet “substantial” amount of her husband's capital.

Daria Zhukova, with whom Abramovich has remained since, is more than just a pretty face. She comes from a wealthy family, her father, Alexander Zhukov, being a close friend of Abramovich. Daria has a degree in homeopathy and has recently opened a trendy boutique in central Moscow. Due to Abramovich's low profile, the couple is largely out of the public eye. Perhaps the only place where they are guaranteed to appear together is the football stadium during a Chelsea game. 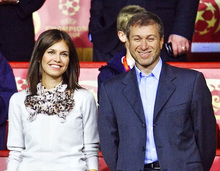 Much has been said about Abramovich's wrongdoings, although all of the accusations have little proof. Berezovsky, the tycoon's former business partner, has accused him of threats and harassment. Abramovich is also said to be evading British taxes despite being a permanent resident of the UK.

Yurganeft, a large Russian-based oil company, is seeking billions of dollars of compensation from Abramovich in a high-profile trial in London. Yurganeft is accusing Abramovich’s company Millhouse LLC of cheating them out of their Russian assets during the liquidation of Sibneft.

In 1992 Abramovich was arrested in a case of theft of government property, namely a train containing 55 cisterns of diesel fuel, worth 3.8 million roubles. He cooperated with the investigation, and the case was closed after the oil production factory was compensated by the diesel buyer.