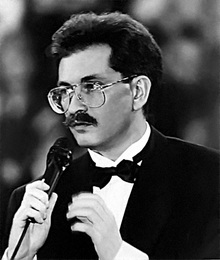 Vladislav Listyev was a popular Russian television presenter, game show host, journalist and businessman. He was assassinated in his apartment building in 1995, shortly after becoming the director of the television channel ORT, now Channel One.

Vladislav Nikolaevich Listyev was born on 10 May 1956. Complications with the pregnancy forced doctors to operate to remove the newborn Vladislav, leaving him with a scar on his temple.

The future TV star’s early childhood was particularly difficult. His parents separated soon after he began school. His father, suspected of taking money from the business where he worked, took his own life. Doctors determined that he had drunk enough chemical solvent to easily kill ten people. Vladislav was close to finishing school at the time. Vladislav’s aunt, in an article in Argument i Fakti newspaper, described Vladislav’s new stepfather as an alcoholic.

Vladislav married young and left home to live with his wife, Elena, whom he had met at a boarding school for athletes where he specialized in track and field. He was a very promising athlete, even taking part in qualifying heats for the 1980 Russian Olympic team. 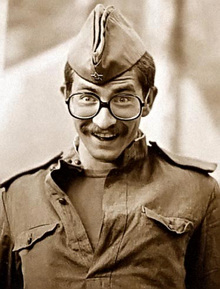 After finishing school he worked with the sports club Spartak as a fitness instructor.

Elena and Vladislav’s first son was born very feeble and did not survive beyond the maternity ward. Soon afterwards Elena began suffering from a mental disorder. Vladislav’s health began to deteriorate as well and he gave up his Olympic dreams. Elena was pregnant with their second child when the couple divorced.

Vladislav, it seemed, decided to make a clean break and embarked upon a new career path. He enrolled in the Faculty of Journalism at Moscow State University. There he met his second wife, Tatyana.

After graduation, Listyev worked with the state media company Gosteleradio as an editor.

Tatyana gave birth to Listyev’s third son, Vladimir, in 1982. The child suffered from serious health problems, and his death at only four years old was a painful blow. It led a heartbroken Listyev to attempt suicide at his country home. His aunt suspected he would take his own life and called the police, who arrived with an ambulance just in time to save him. 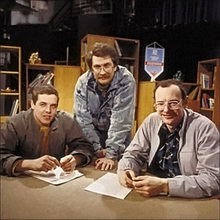 In 1987 Listyev was invited to co-host the talk show Vzglyad (The View). The new hour-long show became the flagship of perestroika, the period of reform in the 1980s under the Soviet leader Gorbachev. It was presented by young, talented journalists, who had lively, unedited discussions – a far cry from the stiff scripted dialogue of other mainstream broadcasts of the era. It was also one of the first shows in Russia to regularly play music videos between segments.

Listyev, along with other colleagues in the state television company, founded the production company VID, which took over the production of Vzglyad. The company went on to create more exceptionally popular TV shows, some of which Listyev presented himself. Listyev hosted the current affairs program Chas Pik (Rush Hour), the talk show Tema (Theme), and Pole Chudes (Field of Wonders), a Russian take on the popular American game show, Wheel of Fortune.

As one of the most recognizable faces on Russian television, Listyev’s popularity was unmatched. His talk shows, which were among the first to credibly broach political issues in the early 1990s, made him an influential opinion leader. 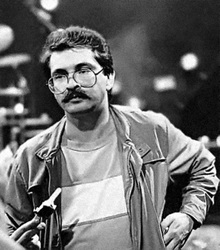 In 1995 Listyev became the General Director of ORT, a semi-state-owned television channel, which was later renamed Channel One.

Television advertising at that time was marred in corruption and controlled by middlemen who re-sold ad slots. Listyev intended to cut out the corrupt re-sellers and instead sell advertising time directly to clients. He planned to achieve this by suspending all advertising on the channel, thereby starving the middlemen of funds while the system was re-organized. It has also been suggested that he planned a reshuffle of the top management and even intended to attract new investors to replace the current ones which included the notorious businessman Boris Berezovsky.

His ambitious plans for ORT left police with no shortage of suspects when he was gunned down in his apartment building after returning from work at about 9 p.m. on 1 March 1995. His wallet and valuables were untouched, suggesting that it was a professional assassination. Earlier that evening he had hosted an episode of the talk how Chas Pik.

The following day, almost all Russia’s television channels shut down and declared a day of mourning. ORT broadcast a photo of the presenter on a simple black background, with the caption, “Vladislav Listyev has been killed.” The Russian President and Prime Minister expressed their sympathies, and thousands attended the funeral.

However, despite conducting over 2,000 interviews, police did not find Listyev’s killers. After 14 years of active investigation, the case was finally closed in April 2009 due to lack of evidence.

An investigator who was involved in the case revealed in an interview with Vesti that some of the suspects were “beyond the reach of the law.” One of the suspects was ORT shareholder Boris Berezovsky, a Russian billionaire who has since been convicted of embezzlement in Moscow and now lives in exile in London. Others included former members of the armed forces.

When Listyev was killed he was living with his third wife Albina.