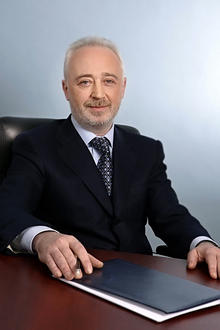 Leonid Melamed, a Russian businessman, scientist and top executive of large companies, was born in Leningrad on 21 June 1961. He started his career as a mechanic-assembly worker at the October Production Association in 1980. He served in the army in 1981-1983, and after demobilization, entered the Novosibirsk Electrotechnical Institute (NETI) where he majored in radio engineering. Graduating in 1987, Melamed chose a career in science and began working as a junior research assistant at NETI. In 1991 he was appointed Rector Assistant Responsible for Commercial Matters. That’s when Melamed’s financial talents were revealed.

In March 1992 Leonid Melamed became one of the founders of the A’lemar Investment Group. Over the next five years he headed a number of large commercial enterprises, but still found time to continue his education and earned his Ph.D. in economics in 1996.

In October 1998 Leonid Melamed was appointed Director General of the federal state unitary enterprise Concern for the Production of Electrical and Thermal Energy at Nuclear Power Plants (Rosenergoatom Concern), which had exercised centralized state control over nine out of the ten nuclear power plants in Russia. In January 2000 Melamed became the First Deputy Chairman of the Board of RAO UES of Russia (The Unified Energy System), the company that provided 70% of electricity generation and about one-third of heat delivery in Russia and controlled 72% of generating capacities and 96% of the total length of Russia’s trunk transmission lines. Leonid Melamed was a close associate of Anatoly Chubais and participated in the elaboration of the Russian power industry reform. The goal of the reform was to create stimulus to increase the efficiency of power companies and provide opportunities to attract more investment to the sector. Anatoly Chubais claimed Leonid Melamed ranged among the most influential and talented financiers of Russia.

In June 2004 Melamed left the position of First Deputy Chairman of the Board of RAO UES of Russia on his own initiative. He remained friends with Chubais, but preferred working as Director General of the A’lemar Investment Group. In 2007 Finance magazine estimated Melamed’s fortune at 90 million US dollars, putting him at number 490 on the list of the 500 wealthiest Russians.

On 7 September 2007 Russian President Vladimir Putin appointed Leonid Melamed Director General of the Russian Corporation of Nanotechnologies (RUSNANOTECH). The corporation participates in building nanotechnology infrastructure and provides scientific and educational programs. It was believed that the appointment of Melamed was lobbied by Anatoly Chubais who was also present in the Committee of Directors of the corporation. However, in just a year, the new President of Russia, Dmitry Medvedev, released Melamed, leaving him to continue his financial activity in other commercial enterprises.

Leonid Melamed is married and has three children.

Viktor Bout Former Soviet military man turned arms dealer suspect, wanted by the U.S. on charges of weapons sale to terrorist and warring factions in Africa, Afghanistan and Colombia. He has been arrested in Thailand in 2008, and extradited to the U.S. for trial in November 2010.