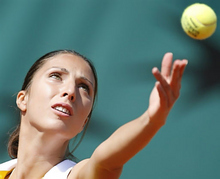 This shining tennis star was born in Moscow. From the age of six her parents signed her up to Moscow's Spartak Tennis Club. Here she trained alongside other up and coming tennis greats, including Anna Kournikova and Elena Dementieva. They were coached under the expert guidance of Rausa Islanova, mother of men's tennis pro Marat Safin. Myskina says of her childhood coach:

“She knows exactly how to coach kids. It's so hard to tell kids they have to do certain things, but she's really good at it. She understands children and she's a great person.”

In 1998, at the age of 17, Myskina broke into the Women's Tennis Association (WTA) top 500 and turned professional. On only her second main draw appearance in Palermo, Myskina won her first WTA title. Channeling her talent, she rapidly climbed the rankings to become one of the best baseline players in the world. 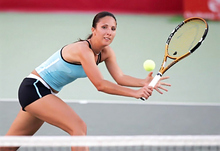 Since turning professional Myskina has won a total of 10 WTA tour singles titles. In 2003 she fulfilled her dream of becoming the first Russian woman to win the Kremlin Cup in Moscow, Russia.

Breaking into the champions

The next year her career reached an all time high when she reached second place in the world rankings, and was named world champion by the International Tennis Federation.

As well as successfully defending her Kremlin Cup title and representing Russia in the Olympic Games in Athens, she also triumphed in the French Open. In a stunning series of victories, she knocked out Venus Williams in the quarter-final, Jennifer Capriati in the semis, and Elena Dementieva in the final. As she clinched the final point to claim the championship she couldn't quite believe she had won, becoming the first Russian female to get a Grand Slam title.

On an all time high after the match, she was asked what it meant for her to win:

More recently, Myskina's career has been held back by a recurring foot injury. She hopes to recover and to dominate the tennis leaderboard once again.

If Myskina had not risen to stardom in tennis, she says she would have been a criminal lawyer, both because she loves crime novels and because she wants to make the world a better place. As well as reading, she enjoys watching movies (her favourite actress is Jennifer Lopez), hanging out with friends and listening to music, in which her wide ranging taste covers everything from opera to Eminem.