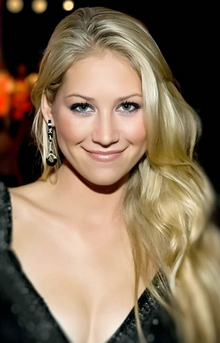 Anna Kournikova is a retired professional Russian tennis player and model. Although she never won a singles tournament, her celebrity made her one of the best known tennis players in the world. At the peak of her fame, fans looking for images of Kournikova made her name (or misspellings of it) one of the most common search strings on Google.

Her ability to deliver a wicked forehand got her in the world's door, but it was her smooth-as-Russian-vodka mixture of perkiness and brain-melting sexiness that made her the world's most recognized athlete.

"I just play tennis for, like, a thousand hours a day. I train a lot, so I stay in shape not to maintain my body but for playing tennis. My life is really not as exciting as they make it out to be, it's much simpler." Kournikova once said.

Anna Kournikova has been in the limelight ever since she turned pro on the world tennis circuit. With her charm and charisma, she has been responsible for adding an element of glamour to women's tennis, thereby adding to its popularity worldwide. Indeed, Anna is the star attraction of any game she plays, regardless of the outcome. It is this appeal that has led to her signing many lucrative endorsement contracts and appearances at high profile events, magazine covers, calendars and numerous television specials. 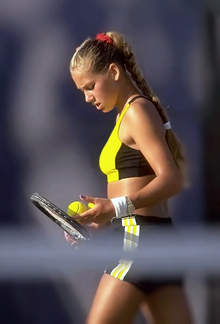 Kournikova was born on June 7th, 1981 in Moscow, Russia. She started playing tennis at the age of five. At that time she practiced twice a week. Kournikova started training seriously at the age of seven.

Anna’s parents took her to a sports club because they wanted their daughter to grow up healthy.

Some say she abandoned Russia when she was nine. But her parents say this is not so; she just went to America to train. “In Miami, Florida there is everything a girl needs: good courts, sun and plenty of healthy food.”

"In order to become someone in sport you need maximum concentration on your training, so mama and I decided that it's easier to do in America," Kournikova recalls.

She enrolled at the Nick Bolletieri Academy, a high profile training center that has produced such stars as Monica Seles and Andre Agassi.

Anna Kournikova's tennis career began promisingly. She won many titles when she was 13 and 14 years old, including the Orange Bowl in 1995 and the Italian Open that same year.

In fact, she ended that year as the Junior European Champion and Junior World Champion.

Kournikova began her professional career by playing in the Fed Cup for Russia while she was still only 14 years old. The following year, she performed impressively in her first Grand Slam tournament as a pro: Anna got as far as the fourth round at the US Open, but was defeated by then World No. 1, Steffi Graf.

Anna also played for the Russia tennis team at the 1996 Atlanta Olympics.

1996 saw Kournikova advance as far as the semi-finals at Wimbledon. Three years later in 1999 she won her first Grand Slam title by partnering with Martina Higgins in the women's doubles, a partnership that was to continue for some time. However, after this the titles seemed to dry up, and Anna never won a singles WTA title.

Still, Anna ranked among the top 20 quite consistently on the WTA roster.

Kournikova reached the semi-finals and finals of many tournaments, without actually winning the title.

Despite this lack of wins, Anna Kournikova remains among the most searched-for athletes on the Internet. Most of Kournikova's fame has come from the publicity surrounding her personal life as well as numerous modeling shoots. During her debut at the 1996 U.S. Open at the age of 15, Kournikova's physical beauty was noticed by the world and soon pictures of her appeared in numerous magazines all over the planet. She has earned huge amounts of money through her endorsement deals, including contracts with names like Rolex and Adidas and even played a small role in a mainstream Hollywood film.

Anna Kournikova underwent ankle and back surgery in 2001 and 2003 respectively. As a result her tennis playing has been restricted. She has been on the professional circuit on and off, though she played a good number of charity matches. In total, she has won 16 WTA titles, including three Grand Slams.

Anna achieved a career high of number eight on the WTA rankings and a top ranking on the doubles tour. 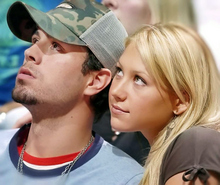 Kournikova's marital status has been an issue on several occasions. There were conflicting rumors about whether or not she was engaged to hockey player Pavel Bure. There were reports that she married NHL hockey star Sergey Fedorov in 2001. Kournikova's representatives have denied this, but Fedorov stated in 2003 that the couple had married and since divorced. Kournikova currently has a relationship with pop star Enrique Iglesias (appearing in his video "Escape") and rumors that the couple had secretly married appeared in 2003 and again in 2005.

"What's important to me is that I love the girl that I'm with… that I'm attracted to her both physically and mentally,” Iglesias said in an interview. “I like that we get along well, that we're compatible. I like her vitality, her kindness. I like the fact that she treats everyone around her with respect, that she is hard-working and very independent.”

Kournikova herself has consistently refused to directly confirm or deny rumors about the status of her personal relationships. She prefers to divert attention to her professional skills.

"One of my passions is working with the Boys and Girls Clubs of America. I love being with kids and since tennis has given me so much, it's only right for me to give back. I want to encourage kids to get into sports, whether it's professionally or recreationally. Another passion of mine is the sports and fitness industry. I'm writing a column for Elle magazine. And I'm working on getting some DVDs out there focused on sports and fitness. Basically, my goal is to take the things I've learned as a professional athlete and try to help women feel better about themselves and lead healthier lives."