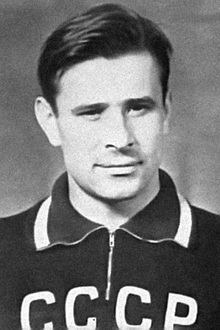 Lev Yashin was born in Moscow into a family of workers. Yashin had a difficult childhood. His family was rather poor and had to share a tiny flat with other relatives. In 1941, after the beginning of the Great Patriotic War (the Soviet Union’s participation in Second World War), Lev Yashin was evacuated to the Volga Region. In 1943, at the age of 13, he went to work in a factory as an apprentice engineer. Upon returning to Moscow in 1944, Yashin started playing football for the team of the Moscow district Tushino, spending all his time on the pitch after work.

According to some sources, at 18, Lev Yashin’s exhausting work led him to a nervous breakdown, after which he quit his job. In danger of being blamed for dodging work, Yashin joined the army. Football became an outlet for the ambitious and energetic young man. In 1949 he joined the youth team of the football club Dynamo Moscow. The club became an important part of Yashin’s life: he played a record 22 seasons for Dynamo Moscow, leaving the squad only in 1971 at the end of his football career.

Interestingly, before becoming a football star, in 1949-1950 Lev Yashin was not a very successful player. After suffering a lack of confidence, Yashin left football for ice hockey. He had a talent for the sport and in 1953 his team won the USSR Cup. Lev was deemed the third best goal-minder in the USSR ice hockey championship that year. In 1954 he was a candidate for the national team to play in the World Ice Hockey Championship, but decided to return to football.

By the middle of the 1950s Lev Yashin became the best goalkeeper in the Soviet Union, a position he achieved through hard work and excessive training. 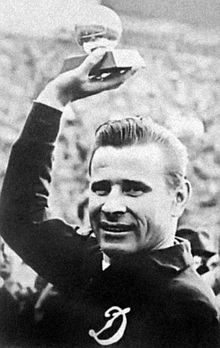 From 1954 Yashin was the goalkeeper of the USSR national team, playing a total of 78 games. Lev Yashin and the Soviet national team won the 1956 Summer Olympics in Melbourne and the 1960 European Nations’ Cup. Yahsin also played three times in the finals of the FIFA World Cup (1958 in Sweden, 1962 in Chile and 1966 in England). His best performance in the World Cup competitions was a fourth place finish in 1966.

Lev Yashin was known throughout the world as the “Black Panther” because of his unusual black uniform, agility and acrobatic leaps. His other nicknames were “Black Spider” or “Black Octopus,” owing to his ability to reach balls from long distances.

Lev Yashin’s style of play designated a new era in the art of goalkeeping. He had superb coordination and his reactions were quick as lightning. Yashin’s ability to predict the run of the game helped him to choose the best position to take on the pitch. Some of his tactics were innovatory, later becoming traditional goalkeeping techniques. For instance, Lev Yashin was one of the first goalkeepers to pass the ball to his players with a throw instead of a kick. He would also often venture outside his area during play, to support his team-mates. Football experts still often accredit these two tactics to Yashin. 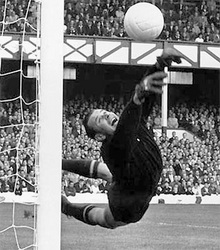 and had an excellent penalty-saving record, stopping 150 spot-kicks during his career.

In 1971 he played his farewell match for Dynamo Moscow at Lenin Stadium before a home crowd of more than 100,000 fans. The select team of the All-Soviet Union Sport Society Dynamo played against a team of world football stars, among them Pelé, Eusébio, Bobby Charlton, Gerd Müller and Franz Beckenbauer. The match ended in a 2:2 draw.

At the end of his football career, Yashin coached children’s and youth teams for a while. At the age of 50 he suffered gangrene of his left leg, which was caused by the obliteration of blood vessels due to excessive smoking. In 1984 Yashin had his leg amputated. The illness, though, didn’t make him quit smoking. Unfortunately, his coaches Mikhail Yakushin and Gavriil Kachalin, who didn’t allow their footballers to smoke, turned a blind eye to Yashin’s bad habit.

Lev Yashin was a friendly and outgoing person, which helped him to become a great team player. At the same time, he was very passionate about his play, pushing himself to the limit. It is known that Yashin’s wife tried to persuade him not to shout too much during matches. He would jokingly reply that shouting was the only way to make players move. A quote by Lev Yashin

clearly shows his professional belief: “What kind of a goalkeeper is the one who is not tormented by the goal he has allowed? He must be tormented! If he is calm, that means the end. No matter what he had in the past, he has no future.”

In 1997 a statue of Lev Yashin was installed at Luzhniki Stadium in Moscow and in 1999 another monument was erected at Central Stadium Dynamo in Moscow, which shows the goalkeeper jumping high in order to catch a ball.