An appetite for gymnastics

“As a child, I was very picky with my food. My mother hoped that if she puts me into gymnastics, I would start eating breakfast without frowning, after having spent a lot of energy in the gym. This is how, by simple nutritional reasons, I started my gymnastics career at the age of four.”

This is how Khorkina herself explains her entry into the sport. She was brought up in a simple family in Belgorod, a Russian city near the Ukrainian border.

Since 1993, when she first competed at the Junior Europeans, Svetlana Khorkina has built a reputable status. Her enviable collection of awards is made up of medals from two Olympics, seven World and five European Championships.

At the World championships in Ghent (November 28 – December 4 2001) Khorkina was the most successful competitor out of 440 participants (both men and women). She won three gold medals (All-around, Uneven Bars and Vault), one silver medal (Team event) and one bronze medal (on Floor). 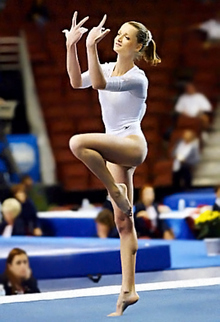 The only title that she missed out on was the Olympic all-around title in Sydney 2000. Her dramatic fall on what was called “her” apparatus, the U-bars, during the all-around competition in Sydney was due to, as said by many people, the wrong setting of the vault, which was her previous apparatus in this event, affecting her performance.

Even then Svetlana was in the focus of attention more than anyone. Two days later, she came back as 'the real Khorkina' and won her second Olympic title on the U-bars after having generously given away her place in the vault final to her younger team-mate Elena Zamolodchikova. The latter not only won the title on the vault, but also the floor, leaving second place to no one else but Khorkina.

Her phenomenal routine on the uneven bars will remain in the history of gymnastics as an innovative composition and style of performance which was well ahead of her time. No one can explain how the 164cm tall Khorkina can manage the fluent execution of such an extraordinary routine. Khorkina’s height is unusually tall for gymnastics. Her coach, Boris Pilkin, became famous for dreaming up incredible combinations for her to perform on bars, so she is always changing her routine. 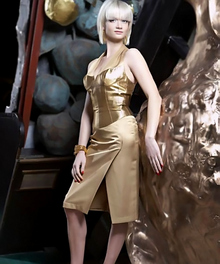 It seems that Khorkina ‘feels’ the bars more than anybody in the world. She has a continuous rhythm when performing on the apparatus and an extremely elegant style of performance. Her performances seem fluent and effortless. Some people say she is “like a cat” when it comes to her routine. At the same time she performs gymnastic elements of extreme difficulty, and adds new original elements of her own. There are no leftover moments in her routine, which is not the case with the majority of gymnasts.

What marks Khorkina’s overwhelming success in the sport is due to the fact that eight different gymnastic moves have been named after her – something unprecedented in the history of gymnastics.

However, outside the gym she also made an appearance as a shining star. Her different achievements are just as varied, but in all of them Khorkina strives towards excellence with the same prowess as she did on the gym apparatus.

She posed nude for the Russian version of Playboy in November 1997. She has aspirations to become an actress, and has taken to the stage as Brenda Venus, Henry Miller's last love, in a landmark Moscow production. However, after leaving the sport following the 2004 Athens Olympics, she claimed that she did not have the patience to coach.

As for her politic career, her family life did not get in the way of her continuing successes. Since December 2004 she has been vice-president of the Russian artistic gymnastics federation. She has been a member of the political party of United Russia since 2003. She was also elected as a member of the United Russia party to the Russian State Duma in 2007 and became the vice-president of the Committee of Youth within it.