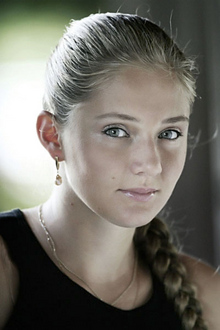 Anna Chakvetadze is the winner of seven WTA professional tennis tours and has been seeded among the Top Five in the world. She clinched a 2007 Federation Cup as a member of the Russian tennis squad. Her most recognizable “trademark” is her long blonde plait.

Anna Chakvetadze was born in Moscow on 5 March 1987 to a Georgian father and a Russian mother. Growing up, she was indifferent to sports – playing the piano was her favorite pastime. At the age of eight, her mother sent her to one of the many tennis schools that were emerging all around the country. At that time Boris Yetlsin, a huge fan of the game, was the President of Russian Federation. He loved to give interviews to international news outlets on the court between sets. Yeltsin was not alone in his infatuation with tennis – all well-to-do Moscow residents joined these clubs and brought their children. Anna was not an exception. Her father had been an athlete – he played for the Georgian “Torpedo Kutaisi” soccer team. Little Anna fell in love with her new pastime. “After I started to go in for tennis, the rest was history,” she remarked.

title in a city competition. After that came her nationwide triumph: in 2001, when Chakvetadze turned 14, she won the Russian championship. But before turning pro 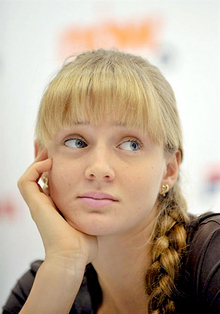 Anna had to fight hard to win recognition in Europe. Later she clinched some junior titles in the Baltic countries and Scandinavia. Most of her opponents, who were two years older than her, were shocked when a little Russian girl with a long blonde plait thrashed them out of the competition. The plait would become a very important part of her image later on when her career in the WTA women’s professional tennis association tour began to unfold.

Her parents devoted themselves 100 per cent to giving their daughter all the resources she needed. Even now her father travels with her to all the tournaments under the aegis of WTA. So when he heard of a chance for Anna to take classes from 1970s tennis star Chris Evert-Lloyd, he did not hesitate. Thanks to her tennis skills and the love and care of her parents Anna made it to the finals of the Wimbledon Junior Tournament in 2003 and her father’s investments started to bring dividends in the form of Anna’s prize money.

“I would love to win a Grand Slam, it’s every tennis players dream,” Anna said in an interview at the time. In 2004 she got her chance at the US Open where she made it through three qualifying stages. The audience at the courts of Flashing Meadows was amazed by the 16-year-old, who thrashed out one of the biggest stars of the tournament, her fellow Russian Anastasia Myskina - 7–6, 6–3 during the second round of the main competition. Although she lost in Round 3, Anna said that the US Open gave her lots of strength and confidence for her future career. 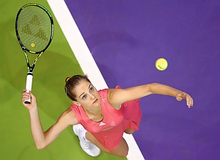 Later on in 2004 she broke into the WTA list of Top 100 best female tennis players. In 2005 Anna did not win any titles but at every tournament she advanced close to the final rounds. She ended 2005 placed 33rd in the World Top 100.

In 2006 Chakvetadze defeated top tennis celebrities Elena Jankovic and Anna Ivanovic. On 25 September 2006, she won her first WTA tournament in Guangzhou, China. A month later she won another one – the Kremlin Cup in her native Moscow. She was closely watched and admired by Boris Yeltsin. Anna managed to clinch the title in spite of fierce resistance from her fellow Russians Elena Dementieva and Nadia Petrova. “Being Russian and winning in your hometown tournament means so much,” she remarked. 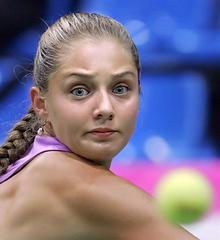 The year 2007, the 20th year of Anna’s life, marked the peak of her career. She won four WTA tournaments: one in Australia, one in the Netherlands and two in the United States. Chakvetadze made it to the quarterfinals of two Grand Slam tournaments: she lost to the top seeded Maria Sharapova in January at the 2007 Australian Open and in June at the 2007 Rolland Garros in Paris. Later she clinched the semifinal birth at the 2007 US Open. Her dream to play in one of the Grand Slam finals did not come true – she was defeated by Svetlana Kuznetsova 6-3, 1-6, 1-6. She also qualified for the 2007 Sony Ericsson Championship – the final tournament of the year for Top 8 WTA players. She beat Elena Jankovic and Serena Williams but then lost to Justine Henin of Belgium and to Maria Sharapova once again. Anna made it to No. 5 in the WTA ratings that year – the highest position in her career so far.

But at the end of 2007 there came a shock: armed robbers attacked her dacha not far from Moscow. They broke into the house, beat her father Djambuli, breaking his arm, and tied up Anna and her mother, Natalya, who was forced to divulge the code of the safe that contained cash (according to the father about 200 thousand dollars), jewelry and some of Anna’s trophies. Luckily, Anna’s younger brother Roman was upstairs and the intruders did not get him. When the robbers left, Anna used all her strength to free herself from her constraints and then together with her brother, freed her parents. The police later caught some of the robbers. Even Anna’s father was in doubt at first that she would be able to recover from this shock and make a comeback. However, she managed to make it back in a couple of months after the assault. 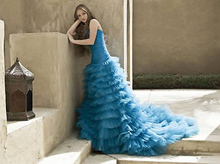 In spring 2008 Chakvetadze won the WTA tournament in France, the last victory in her career so far. Then came a series of flops, including the 2008 and 2009 Grand Slams. Anna explains this by saying she can’t find a coach who can enhance her psychological endurance. In February 2010 at the WTA tournament in Pattaya, Thailand she made it to the quarterfinals in the singles. In the pairs event, together with Ksenia Pervak, Anna managed to get to the finals of the pair competition. This Thai experience helped her to make a comeback to the WTA Top 100 list. In March 2010 she was No 66. Experts are sure, however, that if she keeps it up she will be able to surprise the tennis world one more time. “My goal is to find the best manner of play. And then success is sure to come,” Anna says.

Anna Chakvetadze is also taking correspondent courses in psychology at Moscow State University. Even during WTA tours she continues her studies on the Internet. Anna says that thanks to her studies she has learnt to control her emotions during matches.

Chakvetadze never speaks about her private life even though she is asked if she has boyfriend in almost every interview. In other things, apart from tennis, Anna calls herself “a typical girl.” She loves shopping, chocolate and flowers - roses in particular. She is into jewelry too but feels embarrassed when she admits it. Other “weaknesses” include sport cars (especially “Ferraris”) and soccer. She’s a fan of Jonny Depp but when at home, she prefers to watch Russian movies and listen to Russian music. She is very open and has many friends among her rival tennis players.