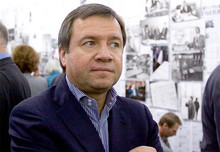 Valentin Yumashev headed the Presidential Administration from March 3, 1997, to December 12, 1998, during Boris Yeltsin’s presidency. Yumashev was also member of the Kremlin’s inner circle, dubbed the “family”, which earned its name because of Yumashev’s relations with Yeltsin’s daughter Tatyana Dyachenko, now Yumashev’s wife.

Valentin was born on December 15, 1957, in Perm, a city in the European part of Russia near the Ural Mountains.

He began his career as an office boy (courier) in the newspaper Komsomolskaya Pravda in 1976 – an official sounding-board of the Central Committee of the Komsomol between 1925 and 1991. The same year he entered the Journalism Faculty at the Moscow State University , studying off-campus.

After demobilization in 1978, he briefly worked as an intern in the newspaper Moskovsky Komsomolets simultaneously studying at the university. In 1979 he returned to Komsomolskaya Pravda as a reporter.

His work in the newspaper was marked by a conflict with Gennady Seleznyov, speaker of the Russian Parliament from 1996 to 2003. Yumashev headed the most freedom-loving part of the newspaper, the section for teenagers. Seleznyov, under pressure from the CPSU (Communist Party of the Soviet Union), was cutting this freedom. Valentin was strongly opposing these tendencies.

While working in the newspaper he met his first wife Irina Vedeneeva.

In 1987, he joined the Ogonyok magazine, supervising the incoming correspondence. The staff of the department consisted mainly of the ladies in their late 40s and was full of intrigues and gossips. Valentin Yumashev took new responsibilities with enthusiasm and soon lifted the spirits in the department. His natural shyness was admired by the ladies and rather soon Yumashev became a favorite among his colleagues.

From 1987 till 1991 Valentin was a member of the editorial board of the magazine. His communicating skills earned him a reputation of a mediator among colleagues. 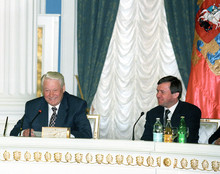 From 1991 till 1995 he worked as a deputy chief editor of Ogonyok. In 1996, he became president of Ogonyok JSC. The magazine then was financed by the tycoon Boris Berezovsky. Valentin Yumashev got acquainted with Boris Yeltsin’s daughter Tatyana Dyachenko with the help of the exiled tycoon. Valentin and Tatyana married in 2002.

During the presidential campaign of 1996, he was an active member of the election headquarters of Boris Yeltsin. Valentin was also scriptwriter of the documentary film about the first Russian president Boris Yeltsin. Portrait Against the Background of Struggle.

On August 13, 1996, he became an advisor to the president on media relations.

From the blog of Tatyana Dyachenko, “Together with Anatoly Chubais a few months earlier, right after the election of ’96, we barely persuaded Valentin to take the post of the advisor to the president. In this case the main argument that Anatoly Chubais used while persuading Valentin was that his life wouldn’t change much. He wouldn’t become an official civil servant and he would just temporarily change his office in the Ogonyok magazine HQ for the office in the Kremlin. We somehow together managed to persuade him. Later Anatoly Chubais asked Valentin to put on a suit and tie and that was a real torture for him.”

Valentin Yumashev being an adviser to the president was also a literary handler (actually co-authored) books of Boris Yeltsin Confessions on a Given Topic and Notes of a President.

Head of the Presidential Administration

In March 1997 Yumashev succeeded Anatoly Chubais in the powerful position of the head of the Presidential Administration. This position is traditionally one of the most influential in modern Russia.

But he didn’t hold the office for long and was dismissed on December 7, 1998. While holding his post he made some structural reorganization in the administration. 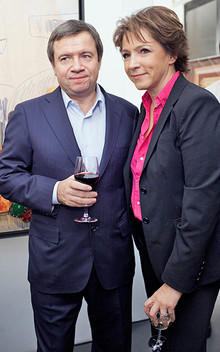 According to Boris Yeltsin’s book, Presidential Marathon, “Yumashev never felt fully comfortable in the new post and once confessed to the president, ‘You know, Boris Nikolayevich [Yeltsin], it is not my life. I feel like a hero of the story by Mark Twain The Prince and the Pauper’. I have the state seal now. I won’t crack nuts with it of course, but I have a wish to do it…”

In April 1999, Valentin became a member of the Security Council of Russia. In December 1999, together with Nikolay Bordyuzha and Aleksandr Voloshin, Yumashev prepared the text of the resignation speech of Boris Yeltsin. The first president of Russia left his office on December 31, 1999.

Everyone who has ever been to his house admires his mother, a person of an outstanding kindness.

Valentin Yumashev is known as a great picnic-lover with barbecue and campfire songs. Once he gave a disc with his own songs as a present to his wife Tatyana on her birthday.

“I love when Valentin plays guitar and sings,” said Tatyana in her blog. “And I’ve been asking him for many years to record a disc for me with my favorite songs.”

In February 2001, Valentin’s 21-year-old daughter Polina got married to Oleg Deripaska (Russian aluminum tycoon, used to be one of the richest persons in Russia). Nowadays, Valentin Yumashev writes for Russian Pioneer (a Russian literary illustrated magazine).