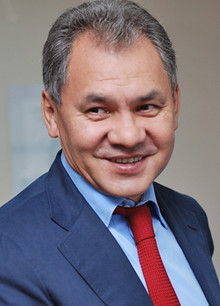 Sergey Shoygu is a Russian politician who held the position of Minister of Emergency Situations from 1991 to 2012 in spite of all the government changes. In May 2012, he left his post and was appointed Governor of the Moscow Region.

Sergey Shoygu was born in the town of Chadan in the Republic of Tuva. His father was a secretary of the Tuva regional Communist party Committee, and retired as Prime Minister of the Tuva Republic. His mother headed the planning department of the Tuva Agricultural Ministry.

Sergey’s career started in 1977, when he graduated from the Krasnoyarsk Polytechnic Institute with a degree in Civil Engineering and got a job in building construction. Afterwards, thanks to his own skills and to his parents’ connections, Sergey rose swiftly up the career ladder. In 1988, he turned to politics and was assigned to be the second secretary of the Communist Party Committee of the city of Abakan.

In 1990, when the country stood at a crossroads, Shoygu came to Moscow right when the new government was being formed. Shoygu was offered the position of vice-chairman in the State Architecture and Construction Committee. In a year he got tired of all the paperwork, and suddenly came up with an idea which did not have much in common with architecture: he decided to organize a Russian Rescue Corps to save people's lives all over the country. He was allowed to do so, and headed the newly-born organization.

In its early days, the Corps was just a bunch of volunteers. Most of them were mountain-climbers who had worked at the site of the Spitak earthquake in 1988. They barely had any equipment and had to use public transport to reach the scenes of accidents. In July, the Corps was renamed the State Emergency Situations Committee, but it still had neither a plan, nor equipment, nor even an office.

In August of 1991, Boris Yeltsin came to power with Shoygu’s active support. For his loyalty, Shoygu was awarded The Defender of Free Russia medal, and his Committee finally got the funding it needed, as well as its own building.

In September, the Committee performed its first rescue mission at the oil refining factory in the city of Ufa. A 700-ton fragment of the factory chimney was collapsing, posing a significant hazard to the city. The team used directed explosions and demolition to make the fragment fall safely in a specially prepared area. The operation was so unique that it was included in the Guinness Book of Records.

The same fall, the Civil Defense Forces passed to Shoygu’s control. Well-equipped rescue units reporting to the Committee were organized all over Russia. In 1994, the Committee was turned into the Ministry of the Russian Federation on Civil Defense, Emergency Situations and Response to Accidents' Implications, abbreviated in Russia as “MChS”.

In 1992, Shoygu’s rescuers prevented an epidemic of ox plague in the Tuva republic, and months later, together with their colleagues from all over the world, searched the ruins in the Turkish city of Erzincan for earthquake survivors. In 1993, they delivered humanitarian aid to the war zone in Yugoslavia, and a year later evacuated Russian citizens from war-struck Yemen. The Ministry has helped people to survive several natural disasters, wars, and acts of terror in Russia and abroad.

Shoygu liked to work in the field, and so he used to come to the sites of the catastrophes with the rescue teams in order to coordinate their efforts and estimate the damage with his own eyes. The words “Sergey Shoygu arrived” could be found in every emergency report on TV or in the newspapers. In 1999 he received the honorary title of “Hero of Russia”, for his “courage and heroism".

Shoygu’s public image was relevant to his job. He appears to be a strong, experienced and responsible man. He is known for his charisma and his convincing arguments. Both of these traits played an important role in Shoygu's political career as early as 1995, when Shoygu helped then-Prime Minister Victor Chernomyrdyn to organize the movement Nash Dom – Rossiya (or, Our Home is Russia in English).

In 1999, Boris Yeltsin uttered his legendary phrase “I’m tired, I’m leaving”, and named Vladimir Putin his heir. Shoygu supported him and actively participated in his election campaign, as did the members of the multiregional political movement Yedinstvo (or Unity), headed by Shoygu. After Putin's victory, Yedinstvo united with one of its political opponents and turned into Yedinaya Rossiya (or the United Russia party).

The Ministry kept working, and Russian rescue teams took part in rescue missions all over the world every year.

However, no organization is without criticism, and there are those that talk about the inefficiency of MChS and the corruption gnawing it from within.

The summer of 2010 was incredibly hot and dry for Russia, causing disastrous and intense forest fires. The smoke from the burning turf covered Moscow and parts of central Russia. The authorities tried to keep the situation under control, but were unsuccessful. Citizens began to fight the fire by themselves, to organize volunteer fire brigades, to gather food, money and clothes for the fire victims. Thousands of people were left homeless by the fires, and about a million hectares of forest were burned to ashes.

It appeared that the MChS had not been ready for the disaster, and did not own enough fire trucks and helicopters. In addition, Shoygu said that according to the Forestry Code, the forest fires were not his ministry’s area of responsibility, and the forestry agency should have reported the dangerous situation earlier. However, the fires of 2010 still had a negative effect on Shoygu’s reputation.

In 2012, Shoygu left his post in MChS and became the governor of the Moscow Region.