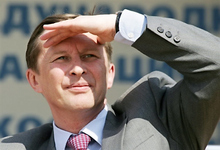 Sergey Borisovich Ivanov is a Russian politician and First Deputy Prime Minister of Russia. He is a reserve colonel general and a member of the Russian Security Council.

Ivanov was born in St. Petersburg (then Leningrad). His father died early and his mother, an optical engineer, brought him on her own. Ivanov attended a specialized school with enhanced English education. While in senior school, he made the decision to become a diplomat. He graduated in 1970 and entered the translators’ faculty of Leningrad State University. While studying there he was an active member of the Komsomol (The Communist Union of Youth, the youth wing of the Communist Party). In his fourth year, he undertook an internship at the Thames Valley University in London.

After graduating from the university Ivanov was invited to work for the Russian Intelligence Service. He was first introduced to the Russian KGB system in 1976, when he worked in the counter-intelligence office, before moving to foreign intelligence. In 1976-1977 he worked in the First Directorate of the KGB in Leningrad and the Leningrad Region, together with Vladimir Putin, the current Russian Prime Minister. Later that same year he underwent KGB training in Minsk and in 1982 he graduated from the Moscow School number 101 of the KGB (now the Russian Federation Intelligence Service Academy).

Starting in 1981 he worked for the main KGB Directorate, taking prolonged work trips abroad. Some sources state that from 1981-1983 he worked as a secretary in the Russian embassy in London and was expelled on espionage charges, but the British government denies this. Beginning in 1985 he worked as an intelligence officer, first in Helsinki, then in Kenya.

Ivanov does not like to speak about his 18 years in the intelligence service, preferring only to say that he has worked in England and Africa.

In 1991 Ivanov began working in the External Intelligence Service, which was created on the base of the former Soviet KGB Directorate. His last post there, in 1998, was as Deputy Director of the European Department. In August 1998 Ivanov was appointed Deputy Director of the Federal Security Service (which at the time was headed by Vladimir Putin) and Director of the Department of Analysis, Prognosis and Strategic Planning, which in fact put him in charge of the information supply to the Kremlin. 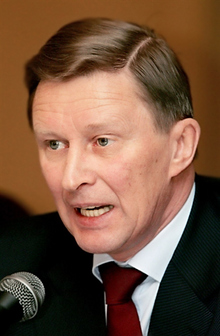 In the spring of 1999 Ivanov entered the Interdepartmental Commission on Russia’s participation in the G8 and in autumn that same year the president appointed him Secretary of the Russian Security Council. In May the following year, the new president, Vladimir Putin, reinstated him to the post. In autumn 2000, Sergey Ivanov led the development of the “Information Security Doctrine” which suggested the restoration of elements of state censorship.

In September 2000 Ivanov was elected to chair the Committee of Security Council Secretaries of CIS Collective Security Treaty Organization countries. In November he was included into the Commission on Military and Technological Cooperation between the Russian Federation and Foreign Countries. On 9 November he was dismissed from military service by an order of the Russian President based on Ivanov’s own report, with the rank of lieutenant general.

Sergey Ivanov stands for wider enlistment of students into the military, and as a means of achieving this, on the abolishment of reserve officer training departments in Russian universities. He names international terrorism as the main threat to world stability, saying that, “the actions of terrorists are internationally coordinated.” He believes that terrorism in the North Caucasus is a part and a product of international terrorism and is apt to accuse the West of patronizing terrorists.

Ivanov holds a 2nd class Order of Merit for the Motherland.

Sergey Ivanov speaks fluent English and Swedish and has a good aural memory: he is capable of easily memorizing and reproducing voice pitches. His hobbies include fishing and reading intellectual detective novels in their original versions. He plays football, hockey, basketball, volleyball, tennis and golf. Ivanov is a zealous admirer of the Soviet historical novelist Valentin Pikul, buys all of the writer’s publications and dreams of creating a museum in his name. Sergey Ivanov is married and has two children.