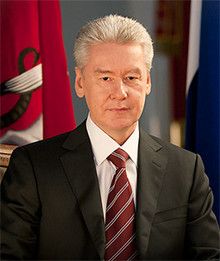 Sergey Sobyanin has been Moscow mayor since October 21, 2010. Former Russian vice-premier and ex-head of the President’s Administration, Sobyanin took over from Yury Luzhkov who had been in charge of the city for 18 years and was fired in 2010 by then-President Medvedev because of “loss of confidence”. Luzhkov was heavily criticized for, among other things, helping his wife, Yelena Baturina owner of construction company Inteco and the world’s third richest woman, profit from construction projects in the city. Ironically, Sobyanin’s wife Irina is also in the construction business, although she has never appeared on the Forbes list.

Little is known about Sergey Sobyanin’s roots. According to some sources Sobyanin’s ancestors were Urals Cossacks. The cavalrymen were famous for participating in the 18th century peasant revolt in the Russian Empire headed by Emelyan Pugachev, one of the pretenders to the Russian throne, whose resistance inspired anarchism in Russia.

Other sources claim Sobyanin could have come from “mansi” - a disappearing Northern indigenous people of hunters, fishermen and reindeer breeders. In all large and respected mansi encyclopedias, Sergey Sobyanin is named among the honorable representatives of this people. But, in an autobiography written for the 2001 Tyumen governor election campaign, Sobyanin denied his mansi origins and called himself a Russian. 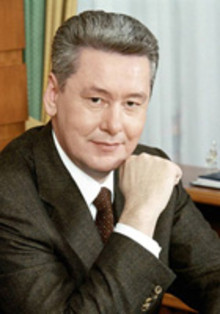 Sergey Sobyanin’s paternal grandfather Fyodor Sobyanin was an Old Believer, who lived a long life. He died when he was over a hundred years old. His later years were spent in the tiny village of Nyaksimvol, in Russia’s North, where Sergey Sobyanin’s father Semyon was born.

Sergey Sobyanin’s maternal grandfather Aleksandr Ulanov was a famous military man. He went through the Russian-Japanese and First World War, receiving the Cross of St. George, the highest military honor in Russia. After the 1917 revolution, he served for the prominent Soviet marshal Semyon Budenny,   then just head of a cavalry division, before returning to his native soil, to a little village in the Chelyabinsk region, in Russia’s Urals. There he built a big and beautiful two-storey house that played a sad role in his life: the Soviets labeled his family “kulaks”, or wealthy peasants, and expelled them to the village of Nyaksimvol’ in Khanti-Mansi Autonomous Area in Russia’s Urals.

This is where the lines of the two families crossed, to eventually produce three children: two daughters, Natalya and Lyudmila, and a son, Sergey.

In 1967 Sergey Sobyanin’s family moved to the regional center Beryozovo, where both his parents worked at a local butter factory.

In 1975, after leaving a local school, Sergey entered a Technological Institute in Central Russia’s Kostroma, one of the ancient Golden Ring cities. After graduation, he went to Chelyabinsk to work at a large tube-rolling factory. Originally a machinist, he became a master just a year and a half later.

In 1989 he got a second degree, in law. His PhD thesis was titled The Legal Status of the Autonomous Areas as Russia’s Federal Subjects.

President Vladimir Putin with Tyumen Governor Sergei Sobyanin and Alexander Filippenko, Governor of the Khanty-Mansi Autonomous Okrug, to the right, at the airport during the greeting ceremony. Novy Urengoy, Yamalo-Nenets Autonomous Okrug. (Photo from http://www.kremlin.ru)

In 1982 he started working with Chelyabinsk’s Komsomol, the Soviet youth association. Two years later, as a promising member, he was sent to Kogalym in the Khanti-Mansi Autonomous Area. There he worked at a “selsovet”, the lowest level of administrative subdivision in rural areas, in a municipal economy department and local tax administration.

In 1991, he became the mayor of Kogalym, a city with a population of 60 thousand people. Three years later, in 1993 he was promoted to first deputy head of the Khanti-Mansi Autonomous Area, supervising economic issues, including relations with the regions’ oil companies.

In 1994 he was elected to the local Duma, then became its speaker and in two years’ time - a member of the Federation Council, Russia’s upper house. In 1998 he became head of the Committee for Constitutional Law, Judicial and Legal Issues.

In 2000 Sobyanin was appointed the President’s envoy to the Urals Federal District. A year later, he won the Tyumen Governor election, beating oil tycoon Vladimir Bogdanov.

In 2005, following changes in the law that saw governors now being appointed [[rather that elected]], Sergey Sobyanin sent a request to the president about a vote of confidence. The same year, Vladimir Putin, then-President, nominated Sergey Sobyanin for election by the Duma of the Tyumen region and he was reelected governor.

Since 2004 Sobyanin has been a member of the Supreme Council of United Russia, the country’s ruling party.

In 2005, he was appointed head of the Administration of the President of Russia.

In 2008 Sobyanin took part in a presidential election campaign, in charge of the headquarters of then-candidate and future president Dmitry Medvedev.

In 2009 he was elected chairman of the board of the country’s state First channel, Russia’s most popular TV channel.

Since January 2010, he’s been a member of the governmental commission on economic development and integration.

In October 2010 Sobyanin became the mayor of Moscow.

Sobyanin’s wife Irina (maiden name Rubinchik) is a cousin of Russia’s former Fuel and Energy Minister, Aleksandr Gavrin. She grew up in Tyumen, the country’s northern oil-rich region. After receiving her degree in engineering and construction, she got an assignment to Kagalym, where she met her future husband.

In 2004-2005 she taught flower arrangement and collage at Tyumen’s center for children’s early development.

Irina now owns a road-construction company, although she has never been included in the Forbes list of the planet’s richest people.

One of Sergey Sobyanin’s colleagues has described him as “an absolute technocrat, for whom achieving his goals is the most important thing; a very tough and demanding manager; 100 per cent a “statesman”, not a liberal”.

Another has called Sobyanin “a man-computer”, stressing his ability to do several things at a time.

He’s also a Laureate of the 2003 Russian Man of the Year prize in the Politician category.