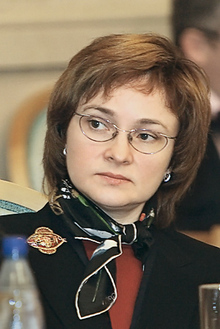 Elvira Nabuillia was Russia's Minister of Economic Development and Trade in 2007-2012.

Two plus two equals one

Elvira Nabiullina was born in the city of Ufa in the Southern Urals into a modest family – her father was a truck driver and her mother worked at a factory. Such humble beginnings made certain she would have to work extra hard if she was to stand out in anything.

When she went to school, she discovered an aptitude for mathematics. Elvira studied diligently and was a straight ‘A’ student, much to the joy of her parents and teachers. Some of her teachers even now speak of her as the best student in their careers. In those days entertainment was scarce, especially in a city known for being a transport hub and a scientific center. However, Elvira was never bored with her nose pressed firmly in her books. Even when the little schoolgirl blossomed into an attractive, tall brunette things remained unchanged. Instead of eyeing the boys around her, she was spoiling her eyesight studying. However, she was number one in class, and perhaps that was enough to satisfy her ambitions… for a while.

Although a favorite with the teachers, Nabiullina wasn’t a goody-two-shoes. Whenever 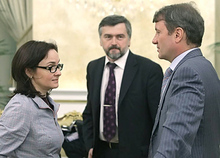 there was a math test, she let the whole class copy her work, which earned her tremendous popularity with her classmates. Finally, she graduated with a golden medal for academic excellence and set her sights on Moscow State University, which is considered one of the country’s top schools. Nabiullina passed the entrance exams and chose to major in Economics. It didn’t take long before she was top of the class at the University as well. She graduated with honors with a PhD in Economics.

From books to the altar

She owes much more than just a degree to her Alma Mater – it was there she met the love of her life. Nabiullina married her teacher, Yaroslav Kuzminov, who later became the head of the Higher School of Economics. The school was founded in the early nineties to teach economics according to world standards. The Soviet economics education was a plan-based Marxist-Leninist, politically-loaded science; it had had become so outdated, that it was easier to open a new school than reform the old system. Since its opening, the school has been the nest of liberal economics in Russia. Perhaps Kuzminov influenced Nabiullina’s views while he was her teacher, for she also holds the same liberal economic views as her husband. 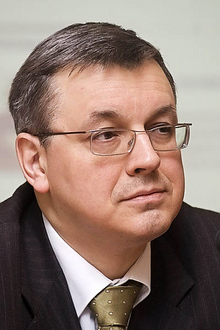 Nabiullina and Kuzminov have two children – a son and a daughter. Kuzminov might have been her teacher at some time, but it’s Nabiullina who calls the shots at home – her strong and independent character made her the natural leader in their relationship. Their friends joke that the only time she ever agreed on anything with her husband was when she decided to marry him.

Top of the hill

Nabiullina’s career moved in leaps and bounds. She took on a job working for the Economic Development and Trade Ministry under German Gref. With a reputation for meticulousness and diligence, she was always the first to come to work and the last to leave. Soon she became Gref’s right hand “man” and later Deputy Minister of Economy. Nabiullina also worked for the Department for Economic Reform, and was a President of the Centre for Strategic Research, which developed economic reforms during Vladimir Putin’s presidency. She even helped write presidential speeches. In 2004, she was among seven people who received special thanks from then President Putin for her input in writing the Federal Address. There were opinions voiced in the media that it was thanks to her views that the President’s speech had a liberal tone.

In September 2007, after Putin became Prime Minister, he appointed Nabiullina Minister of Economic Development and Trade. Apparently, he thought bringing a woman into the government would bring a breath of fresh air into the Cabinet. Experts have called this move a breakthrough in Russian politics, and were hoping Nabiullina, with her love for detail and organization, would put things in order. Having been German Gref’s right hand for years she was ready for the job like no one else. Following her appointment Gref said: “I think she is one of the most qualified specialists in the country and one of the most talented managers. She is very honest and transparent and is quite a workaholic. She clearly understands the principles of the market economy and knows her job well.”

The real test came a year later when the global economic crisis reached Russia. Nabiullina's being a liberal economist meant she had to find a balance between saving the economy and keeping government money out of private businesses and banks. While helping to keep the economy afloat, she continued to push for innovative developments and market competitiveness – the key goals she has pursued through her policies. “Just because there is a crisis, we shouldn’t quit our plans – we must simply find new ways of achieving them,” she said.

Nabiullina stood firm on her feet in a place few men have been able to reach. She was working in her own brilliant style, but the former grey cardinal still preferred to stay in the shade. It was a drastic contrast to her ex-boss – he was always in the limelight with his flashy ties and expensive suits. If there’s one area where Nabiullina is a conservative, it’s her in her wardrobe – she always wears plain-colored suits, high necklines, low heels and little make up. Although very communicative at work, she’s a closed book when it comes to talking with the press.

Is it modesty? Some of her colleagues say she thinks highly of herself. Be it true or not, frankly speaking, she can afford it – after all she’s earned everything she has in life with her own sweat and blood and she’s conquered the territory were no woman has trod before.

Elvira Nabiullina left office in May, 2012 and was appointed Presidential Aid to Vladimir Putin.