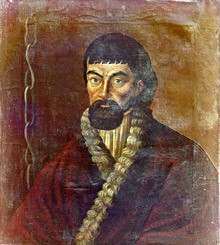 Very little is known about Emelyan Pugachev’s life before the Peasant Insurrection. He was born circa 1742 in the village of Zimoveiskaya along the Volga River. Pugachev was the youngest of four children. His father was a Cossack landowner, so, naturally, Emelyan was destined to become a Cossack too, and join the Russian troops if a war should ever arise.

At the age of 17 he married a Cossack girl, with whom he had five children.

Pugachev took part in the Seven Years’ War with Prussia and returned home in 1762. He spent the next seven years between his home and different service assignments until the next war. During the first Russo-Turkish war (1768–1774) he participated in the siege of Bender. His faithful service and military valor earned him the rank of “khorunzhy,” a Cossack company commander, in 1770.

Despite the progress of his military career, Pugachev requested to leave the army permanently in 1770 because of severe illness. But he was refused a discharge and ended up fleeing the army and living as a fugitive. He was arrested several times by the authorities as a deserter but each time he managed to escape from prison and continue his wanderings.

He lived among the Old Believers for a time and then finally joined the group of Yaik Cossacks, where no one knew of his past.

The revolt of the Yaik Cossacks

In the course of his wanderings Pugachev was struck by the bitter unrest he found among the lower classes in Russia. He settled in the Malykovka District, on the right bank of the Volga River.

Historically, the Cossacks were free people who lived along the vulnerable southern frontier of Russia. The Yaik Cossacks made their main livelihood from fishing in the Yaik River, near the Volga. In exchange for their free living, they provided military service to Russian tsars during invasions and enemy attacks. However, over centuries, they lost more and more of their freedom privileges.

Eventually heavy taxation by the government became a major issue and the Cossacks broke into a revolt in 1772, which was sparked by the murder of General von Traubenberg, the government official, who was sent to investigate the Cossack’s complaints. His way of dealing with the conflict was to punish all those who refused to comply with government policy. Pugachev, who was a rebel by nature, decided to ride the wave of general unrest and the Cossacks welcomed him as d a strong, uniting figure.

In 1762 Tsar Peter III was murdered as part of coup organized by his wife Catherine, who took over the throne. Rumors, however, bean to circulate that the tsar was still alive and every now and some one would come forward, claiming to be the surviving Emperor.

In his earlier wanderings Pugachev had appeared as a rich merchant, promising freedom and wealth to the Cossacks if they fled with him to Turkey. He saw how willing people were to follow him and soon realized that with that kind of backup, he could accomplish greater things than just fleeing to Turkey.

So, Pugachev proclaimed himself Emperor Peter III, with the support of the Yaik Cossacks. The idea of ascending (even if under false pretences) to the throne and, as a consequence, working justice carried a massive potential.

At the time, the Cossacks were not the only unhappy group in Russia. Tens of thousands of serf peasants were leading miserable lives of slavery in a country whose economy had been shattered by continuous wars while the nobility insisted on maintaining their extravagant lifestyle at court.

Moreover, the serf owners were given complete freedom to dispose of the peasants as they pleased. They could be traded, lost in card games or used as security to get a loan from a bank. The violence, abuse and inhumane treatment of serfs was never prosecuted and the serfs longed for change.

Pugachev promised everything the Yaik Cossacks could ever desire – high wages for their military service, free use of the lands and rivers and even free salt, which at times was more valuable than gold. Moreover, he promised to create a new class in the Russian Empire – the class of Cossacks to replace the nobility.

Such generosity was the best proof that he was indeed the Emperor, and soon the original small troops of a few dozen Cossacks began to swell into the tens of thousands with the addition of fugitive serfs, released convicts, religious dissenters and members of the Bashkir and Tatar tribes.

Pugachev and his troops besieged the city of Orenburg, the administrative center of the region on the Ural River, for nearly six months and sought to make it his headquarters. Meanwhile, news of the revolt incited bloody uprisings against landlords and government officials along the Volga River. The insurrection speedily metastasized and by the time a force sufficient to quash it was deployed, it had stretched from the Urals to the Volga.

Thousands left their homes to join the insurgents, whose numbers increased to about 25,000. Under Catherine II most such disturbances were local and fundamentally unthreatening. But Pugachev’s was neither. Catherine II was slow to respond. In 1773 she finally concluded that the revolt was dangerous enough to warrant her action and sent a large force to suppress it.

Pugachev was compelled to end the siege of Orenburg, but avoided capture by government forces. Again he marshaled a sizable following and, in July 1774, was able to resume the offensive and capture the city of Kazan.

Russia had never seen such a massive uprising against the state. The insurrection fever had spread to all parts of the country and threatened to overthrow the whole political and social order of Russia. The latest serf uprisings took place near Nizhny Novgorod only 275 miles east of Moscow, which cleared the way to Moscow and St. Petersburg.

By this time Pugachev’s army by different estimates had nearly 40,000 troops. Catherine, now deeply alarmed by the nearness of the revolt, sent new contingents against Pugachev. They succeeded in destroying most of his army, but he once again evaded efforts to capture him.

In an attempt to curb the insurgents, mass public executions were carried out in towns and villages, where the state army had defeated the peasants. However, Pugachev’s troops were matching the violence – landowners abandoned their houses fleeing for their lives or hiding in the woods for fear of mobbing by their serfs. 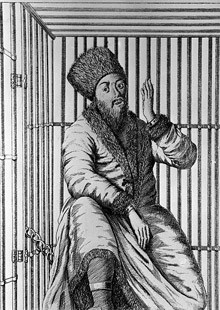 Even with his troops damaged, Pugachev remained determined and made his way to the Yaik Cossack region, hoping that the Yaik and Don Cossacks would provide him with a new army. However, it was here that instead of supporting him, his closest associates betrayed their leader. He was seized and handed over to the authorities.

Pugachev was interrogated for a month before being sentenced to death and sent to Moscow. Catherine II wanted to make a public example of his execution to demonstrate her power over the defeated rebels. Pugachev was to be publicly beheaded and then quartered, his body parts exhibited in four different parts of the city, before being burned the next day. Her orders were executed on 10 January 1775 at Bolotnaya Square in Moscow.

Despite the successful defeat, the Peasant Insurrection of 1773-1775 deeply shook Catherine II, and compromised her reputation in Europe. She renamed all places that bore the memory of Pugachev, or the insurgents, and had his house burned to ashes. Even the Yaik River, from where the Yaik Cossacks derived their name, was renamed the Ural River.

Although she relaxed the taxation of Cossacks there was no relief for the many peasants who continued to live a life of slavery.

Catherine’s fear of any reform to serfdom, reinforced by her successors in an attempt to uphold their security, meant nothing but repression for the lower classes who maintained the shameful condition of Russian serfdom until 1861. This profoundly stunted the growth of Russia’s economy, while Europe had already stepped into the industrial age. Some historians believe the effects of the gap persist to this day.