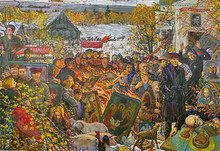 A “kulak” is a rich peasant who uses hired labor at his household farm, owns some mechanical agricultural equipment, and is involved in commerce. In the 1920’s the young Soviets considered kulaks a threat since they were in possession of private property, and in the early 1930’s Joseph Stalin gave an order to “liquidate the kulaks as a class”.

Before the October Socialist Revolution in 1917, the word “kulak” was a dubious title for wealthy villagers considered stingy and dishonest by their neighbors. After coming to power, the Bolsheviks spun the insulting connotation of the word in their favor, and turned it into a term which described not just a greedy personality, but a certain level of prosperity. Peasantry was divided into three classes: poor peasants, peasants of medium wealth, and kulaks who were declared unreliable and dangerous.

Borders between the classes were transparent, there were no strict limits as to how much property would make peasant a kulak, so the government just confiscated property from the well-off peasants of their choosing and divided it among other classes. In the spring of 1918, “the Committees of the Poor” were formed in villages to perform this task. These committees consisted of, as the name indicates, poor people who were actually free to decide whether or not someone was a kulak. Of course, envy and personal scores played a large part in their decisions. 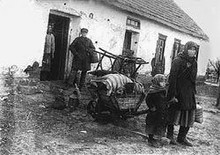 Dekulakization of a family in Ukraine. 1931

While the Civil War between the Bolsheviks and the White Guard was yet not over and the country suffering from economic crisis, the government introduced prodrazvyorstka – a program, which obligated peasants to sell the surpluses of their crops to the state at a low price, leaving only a fixed amount of produce for themselves. The program was implemented to provide the army and cities with food. Those who hid or destroyed their “surpluses” were also considered kulaks, whether wealthy or not.

Before being dismissed in December, 1918, “the Committees of the Poor” had confiscated 50 million hectares of “kulak” land. Prodrazvyorstka was replaced by taxes in 1921, and the usage of hired labor was allowed again, too. Peasantry regained their motivation to work, and lived rather peacefully until 1929, when collectivization started. All personal households were to be united in kolkhozes – collective farms, and all cattle, land and equipment were to become collective property. Everyone was to give away everything he earned, and those who earned more were less willing to share.

In 1929, the term “kulak” was finally defined. And in 1930, Stalin declared kulaks “public enemies” and started a “dekulakization” campaign. All kulaks were to be imprisoned, exiled to Siberia with their whole family, or executed. In addition, they were denied the right to enter kolkhozes and lose the “kulak” title.

“Dekulakization” repressions stopped only in 1954, after Stalin’s death. Exiled kulaks were granted the right to return. In 1991, kulaks and their family members were finally exonerated.