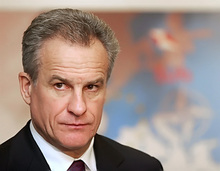 Although his last name may be difficult to pronounce, Sergey Yastrzhembsky made a career out of spelling out government policies. A spin doctor in the Yeltsin and Putin administrations, he learned how to navigate the Kremlin's treacherous political torrents but eventually was thrown off the boat. Yet, the skills and ties he acquired in the presidential administration did help him find new shores. Having excelled at interpreting Kremlin insiders, he now spends his time documenting the lifestyles of Morocco's Berbers and Botswana's Bushmen.

Nick-named by journalists Yastreb Zhensky, or “Women's Hawk,” Yastrzhembsky was definitely a change of scenery for the Kremlin. In August 1996 the handsome and well-educated Yastrzhembsky was appointed Press Secretary to President Boris Yeltsin - at that time the leader was already widely disliked, though still reelected for a second term.

While his tricky last name earned him a few unwelcoming reviews in the beginning, over the years he developed a good rapport with journalists. A career diplomat prior to his Kremlin appointment, Yastrzhembsky had worked at several specialized magazines, eventually moving to the position of editor-in-chief. The knowledge of the industry came in handy later, both in establishing relations with the press corps and formulating the Kremlin's public line.

By the time he joined Boris Yeltsin, the president’s romance with the bottle had already been well publicized. With the economy going south and public discontent growing, Yastrzhembsky's job was mostly about damage control, which he did the best he could. For his efforts, Yastrzhembsky was soon promoted to Deputy Head of the presidential administration. But while this appointment gave him more leverage in dealing with Kremlin insiders, it was also the beginning of the end of his first Kremlin string. In September 1998 Yeltsin fired Yastrzhembsky suspecting him of being involved in a plot to appoint the widely popular Moscow Mayor Yury Luzhkov as a new prime minister. Yastrzhembsky denied the claim but started to work for Moscow City Hall immediately after leaving the presidential administration.

Two years later he returned. Yeltsin was already gone and Vladimir Putin was just settling in. During Yastrzhembsky's second string at the Kremlin (2000-2004) he was mainly responsible for shaping public opinion on the second counterterrorism operation in Chechnya, colloquially known as the Second Chechen War. An appreciator of well-tailored jackets and fashionable ties, Yastrzhembsky had no problems exchanging his posh suits for camouflaged gear to pose for the cameras in Grozny. The change of style in his handling of public relations was pretty swift too. Soon Chechnya became off limits for many independent reporters and Yastrzhembsky became one of the very few available sources on the matter.

In 2004 Yastrzhembsky's career had come full circle. Having started as a diplomat, he was appointed as a presidential envoy to the European Union. Fluent in four languages, he was a frequent visitor to Brussels and Geneva until his barely noticed resignation in 2008. One of the most recognized faces in the late 1990s, a decade later he was virtually invisible.

But in October 2009 Yastrzhembsky again produced a media splash. Sporting a bronze tan and a well-groomed beard, he presented the public his first documentary on the life of African tribes. The filming of Bushmen hunting down their prey and honing their teeth has attracted many powerful businessmen and politicians, proving that service in the Kremlin can be a source of not only connections but also - inspiration.

Yastrzhembsky is married and has two sons.