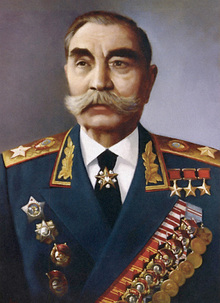 Semyon Mikhailovich Budenny was a Soviet military leader, a participant of the Russian Civil War of 1917-1923, a First Cavalry Army Commander, one of the first Soviet Union Marshals, and a three-time Hero of the Soviet Union.

Budenny was born in a small village in the Rostov Region into a poor peasant family. He started working when he was nine years old as an assistant at a shop and at a smithy, as a coal-heaver and a threshing machine operator.

When he was called up for military service, he served his regular term in Danish King Christian IX’s Dragoon Regiment where he remained for extended service. He took part in the 1904-1905 Russian-Japanese War as part of the 26th Don Cossack Regiment.

In 1907 Budenny, as the regiment’s best horse-rider, was sent to St. Petersburg’s high school of cavalry officers to undertake a one-year course for low-rank officers. After that he served in the Dragoon Regiment until 1914. He participated in World War I, earning the rank of senior

noncommissioned officer of the 18th Seversk Dragoon Regiment and St. 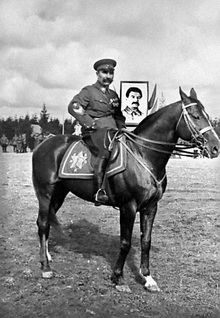 George’s Crosses of four classes along with four medals for bravery.

In the summer of 1917 Budenny arrived in Minsk together with the Caucasus Division; there, he was elected Chairman of the Regiment Committee and Deputy Chairman of the Division Committee. In August he took part in the disarmament of the Senior White General Lavr Kornilov’s troops in Orsha (Belarus). After the October Socialist Revolution Budenny returned to the Platovskaya Cossack village on the Don River, where he was elected a member of the Executive Committee of the District Council and was appointed Chairman of the District’s Land Department.

In February 1918 Budenny created a revolutionary cavalry squad that acted against the Whites on the Don. The squad grew into a regiment, then into a brigade and finally into the cavalry division that performed successfully near Tsaritsyn (now Volgograd). In the second half of June 1919 the Red Army’s first large cavalry unit was created, the Cavalry Corps, under Budenny’s command, which played the decisive role in August’s defeat of the main forces of general Vrangel’s Caucasian Army at the Don’s upper reaches. Parts of the corps took Voronezh, closing a 100-kilometer gap in the Red Army’s defense line on the route to Moscow. The victories of Budenny’s corps over general Denikin’s forces at Voronezh and the village Kastornoye in the Kursk Region sped up the Whites’ defeat at the Don. 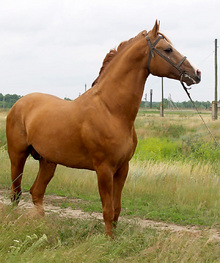 In November the Southern Front commanders signed the order to rename the Cavalry Corps the First Cavalry Army, of which Budenny was again appointed commander. The First Cavalry Army, led by Budenny up until October 1923, played a major role in many of the Civil War’s major operations. However, the Army was defeated by Józef Pisudski’s forces during the Soviet-Polish War of 1919-1921. While falling back, the army executed numerous Jew pogroms in Ukraine.

In 1921-1923 Budenny was a member of the Revolutionary War Council, and then, a Deputy Commander of the North Caucasus Military District. He did great work in organizing horse stud farms, which resulted, after years of work, in the appearance of two new horse breeds: the budennovskaya and the terskaya. In 1923 Budenny became the “godfather” of the Chechen autonomous region: wearing the hat of a Bukhara emir and a red ribbon across his shoulder, he came to Urus-Martan (central Chechnya, South-West of Grozny) and followed the Central Executive Committee’s decree to declare Chechnya an autonomous region. That same year Budenny was appointed the Red Army Commander-in-Chief’s assistant on cavalry. From 1924 through 1937 he was the Red Army cavalry inspector. In 1932, he graduated from the Frunze Military Academy. 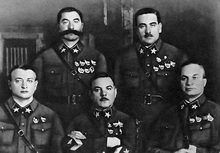 On 22 September 1925, personal military ranks were implemented. In November, the Central Executive Committee awarded five of most distinguished Soviet military leaders, Budenny among them, the rank of “Marshal of the Soviet Union.”

From January 1943 Budenny was the Soviet Army’s Cavalry Commander, while at the same time, from 1947 through 1953, he occupied the post of Deputy Minister of Agriculture on horse breeding. Starting from May 1953 and until September 1954 he was the cavalry inspector. At the same time, he was a member of the Group of General Inspectors of the USSR Defense Ministry. The presidium of the Supreme Soviet awarded him with the title of Hero of the Soviet Union twice. 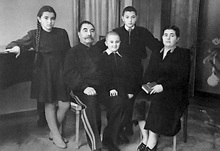 Semyon Budenny was married three times. His first two marriages fell apart because of cheating and the frivolous life his “high echelon wives” led. Budenny’s first wife perished in 1924, officially in an accident, but rumors abounded of Budenny having shot her out of jealousy, especially since she died of a gunshot wound and Budenny married only a day after her death. His second wife was an opera singer 20 years his younger. The life she led was just as frivolous as her predecessor, with multiple affairs and visits to foreign embassies, which attracted the attention of the Peoples’ Commissariat of Domestic Affairs (the NKVD). She was arrested in 1937 under espionage charges. In court, she testified against her husband, but was first sentenced to a labor camp term, then to exile and was only freed in 1956. Budenny made no attempt to make her life easier despite the fact that he spoke to Stalin in defense of the wrongfully convicted directors of his stud farms many times. Instead, he married for a third time, though after his second wife was freed, he took her to Moscow and covered her living expenses.

Budenny died in Moscow, aged 90, of a cerebral hemorrhage. He is buried in Red Square at the Kremlin Wall with a monument on top of his grave. His widow Maria Vasilyevna, 33 years younger than him, died in 2006.

During his life, Budenny was awarded seven Orders of Lenin, St. George Crosses of four classes, six Orders of the Red Banner, a First Class Order of Suvorov, orders and medals of foreign countries and three times received honorary revolutionary award weapons. He was also named an honorary citizen of the town of Serpukhov in the Moscow Region.