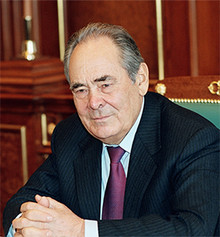 Mintimer Shaimiev is a Russian politician and the first President of Tatarstan Republic in 1991-2010.

Shaimiev grew up in a Muslim family of peasants in the Russian Republic of Tatarstan. Before the 1917 revolution his grandfather was a prospering middle-class farmer. The changes brought on by the revolution affected the Tatar village as deeply as they did the rest of the country.  Collectivization put an end to all private farms, confiscating their land into the common fund - Shaimiev’s family was no exception. However, the family’s love for the land remained, and during Soviet rule Shaimiev’s father worked at a collective farm and eventually became its chairman, a position he occupied for 26 years.

Shaimiev was the ninth child out of ten. Before he was born the family had lost four boys, so following a national tradition his parents gave him a name with a special meaning to protect him throughout his life – Mintimer, translated from the Tatar means “made out of iron.” He needed a lot of strength to survive the following years - his childhood coincided with the most difficult years of WW2 and post-war recovery.

In 1959, Shaimiev graduated from Kazan Agricultural Institute with a degree in mechanical engineering. He worked as an engineer at first, but soon proved a good manager and eventually was promoted to head of a local agriculture equipment enterprise. 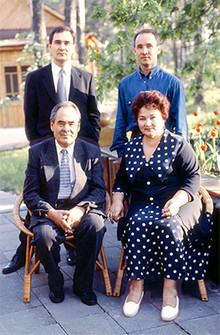 If one was to make one’s career as a statesperson in the USSR, it was necessary to join the Communist Party. At some point every aspiring worker was faced with this necessity, which was largely seen as a formality. People went through the motions, often without much thought about Communist ideology in order to enhance their career opportunities. Shaimiev too joined the ranks of party comrades. The move proved worth the trouble and soon 32-year-old Shaimiev was appointed the Republic’s Minister of Irrigation and Water Resources. Before Shaimiev, it was the most backward and forgotten ministry in the republic’s government structure. Under his management it became a pioneering department, its immediate effect visible at dinner tables across the country with the increased supply of fresh fruit and vegetables.

Shaimiev’s joining the Communist Party wasn’t purely a practical step – he was a firm believer in the values of the system and remained loyal to it all the way until its collapse in 1991. Even during the 1991 coup d'état attempt, which sought to overthrow the first Soviet President Mikhail Gorbachev, Shaimiev sided with the Communists.

In 1959 Shaimiev met his wife Sakina at a disco – they married in 1961. They were so poor at the time that they couldn’t even afford to buy wedding bands. Sakina was still a student at the university’s Economics Faculty, but Shaimiev couldn’t wait to have children, he promised to help her in every way if she would just bear him a son. He kept his promise – while Sakina was a nursing mother, he did all the housework. A few years later they had another boy. With his family life all settled, he could now totally devote himself to his work.

Step by step, Shaimiev was climbing the party ladder and in 1983 was promoted to secretary of the regional Communist Party Committee, followed by the top job in the republic as the First Secretary of the Tatar Communist Party Committee in 1989. A year after that the Supreme Council of the Republic declared independence and Shaimiev became its first president. He has often been called the survivor, having held his presidential post for three consecutive terms outlasting Gorbachev,  Yeltsin and Putin.

At the helm in the republic for 19 years, Shaimiev managed an uphill task – he kept close ties with Moscow and yet preserved the republic's identity. Even in the Soviet Union, he tried to fight for Tatarstan’s identity as a Republic. The USSR was comprised of 15 independent republics, and Tatarstan was a mere subject in one of them, Russia. Shaimiev wanted Tatarstan to be recognized in its own right and become the 16th republic of the Soviet Union.

At the end of the 1980s, when it was obvious that the USSR was on the brink of collapse, there were many territories claiming independence. Shaimiev thought it would be the right time to make a push for his home republic, but at the end had to compromise. He was able to obtain enough attributes of an independent state to give the residents of Tatarstan a feeling of full autonomy.

And this wasn’t easy in a republic with Muslim Tatars making up more than half of the population. In the 1990s, military conflicts for independence in Islamic Chechnya were sending shockwaves across other regions of Russia with a Muslim population. The republic of Tatarstan was no exception. Calls for separatism were heard there as well. More than 60 per cent of residents supported the idea of independence in the early 1990s. Experts say had that happened, the consequences could have been drastic for Moscow. If the successful and prosperous Tatarstan had seceded, the whole of Russia could have collapsed, domino-style. 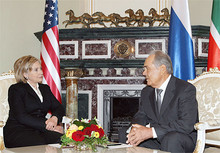 But the mild and moderate policies of Shaimiev silenced the separatists without the use of force. Those calling for full independence soon realized there was no actual need for it. Shaimiev managed to earn the only special autonomy agreement with Moscow of any of the 89 regions that make up Russia. The region quickly became one of Russia’s most stable – economically and, most importantly, ethnically. Something the current US State Secretary Hillary Clinton credited Shaimiev for during her visit to the republic’s capital Kazan in October 2009.

“You are well known as someone who has fostered religious tolerance. It's a wonderful example of what can be done if people work together. I am happy to be here in a place that models interfaith tolerance. So important in the world today," – said Ms. Clinton.

In order to protect his republic’s identity, Shaimiev was among the authors of Tatarstan’s first ever very own constitution in 1992. Two years later he signed a treaty with the federal government in Moscow, allowing Tatarstan to be a sovereign republic within Russia. The people of Tatarstan reacted accordingly – in the presidential elections of 1996 and 2001, Shaimiev received 90 and 79 per cent of the vote respectively.

Of course, there were some who criticized Shaimiev, pointing to his squeezing of critical media in the republic. But all that seemed hardly relevant when they saw construction cranes rivaling the minarets against Kazan's skyline. While Tatarstan was being reformed politically, its residents enjoyed steady economic growth. Tatarstan holds third spot in the Gross Regional Product rating in Russia, second in agricultural production and second in construction rates. Its capital Kazan became one of only two cities in the entire post-Soviet space to build its own underground rail system. In 2002, Europe’s biggest petrochemical factory was built in the city of Nizhnekamsk.

The KAMAZ auto plant in the city of Naberezhnye Chelny remains one of the Russian market leaders in the production of heavy duty trucks, while KAMAZ team racers have often won the famous Paris-Dakar rally. Exploration and extraction of oil in the republic has been a success – over a billion tons of crude oil has been discovered there, while Tatarstan’s oil company Tatneft made it into the top 10 of Russian companies. The Soviet regime turned many of Kazan's mosques into stables and gyms. Now they have re-opened, to the gratification of local Muslims. 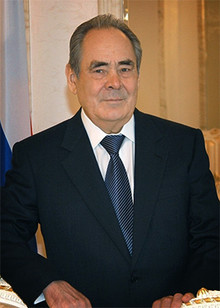 Many agree that little of this would have been possible without Shaimiev.

After almost 20 years in power, Shaimiev stepped down in March 2010 . The veteran politician himself asked then-President Medvedev for early retirement. Medvedev said he valued Shaimiev’s work as the leader of one of the country’s most successful regions. “My wife has been terrorizing me to leave the job since I turned sixty, we even have a nickname for her – domestic opposition,” says Shaimiev. “When she heard the news that I would not seek another term, she cried all evening for joy.”

Experts have been speculating what caused one of Russia’s longest serving politicians to undertake such a step. But Mintimer Shaimiev gave a simple explanation – he’s tired of politics and trusts his successor to continue his course.

In an interview Shaimiev was once asked what he considers his greatest achievement as Tatarstan President. This is what he said: “My biggest accomplishment is that I changed the way we the Tatars are seen as a nation. The Soviet ideology was somewhat negative towards the Tatars. The history books were full of negative connotations because of the Tatar-Mongol yoke on Russians in the Middle Ages. I was always very distressed about it, as was the entire Tatar intelligentsia – that kind of attitude was very offensive, because we’d been friends with the Russians and other nations for centuries. I am very happy that during my presidency the attitude toward my people has been changed drastically, they are now seen in a totally different light. Right now it’s hard to even imagine what kind of tags the Tatars would have been given, if Tatarstan had been the cause of a territorial dispute in the very heart of Russia. We were walking on the edge, but we were able to reach both inter-confessional and interethnic harmony, and this is our greatest achievement, and because of that Tatarstan is now leading the development of new Russia.”