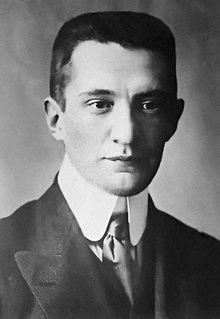 Aleksandr Fedorovich Kerensky was a Russian social and political figure, a minister, later the Chairing Minister of the Provisional Government, author of memoirs, historic research and a compiler and editor of documentary works on the history of the Russian Revolution.

He was born in Simbirsk (Ulyanovsk) on the Volga River into the family of a gymnasium director. His family moved to Tashkent after his father was appointed as chief inspector of the popular colleges in the Turkestan Region in 1889. Following his graduation with honors from the First Tashkent Men’s Gymnasium, Kerensky entered the History and Philology Faculty of St. Petersburg University, but a year later he transferred to the Faculty of Law. Three years after that, during a students’ meeting, he made a speech in favor of the peoples’ struggle, and for that was sent back to his parents for some time.

After graduating in 1904, Kerensky went to the estate of the General Staff Colonel Baranovsky, where he married the colonel’s daughter, Olga. Upon returning to St. Petersburg, he entered the college of lawyers and became an assistant attorney at law. Then, he became close with the members of the “Liberation Unity,” a political party uniting the “liberatory” clubs of 22 Russian towns.

Kerensky took the manifest of 17 October 1905 as the beginning of constitutional monarchy in Russia. During the revolution of 1905-1907 he gave law consultations to workers and published articles in the pro-social-revolutionary bulletin “The Thunderbird” (“Burevestnik”). The bulletin became the first victim of police repressions: the eighth (other sources suggest ninth) circulation was confiscated. On 21 December Kerensky’s flat was searched, revealing leaflets of the “Armed Uprising Organization.” An arrest warrant was issued under charges of belonging to the combat brigade of the social-revolutionaries. Kerensky remained in custody until April 1906, at which time he was released due to a lack of evidence and sent to Tashkent together with his wife and one-year-old son Oleg. In autumn 1906 he returned to St. Petersburg. After his return he became a popular lawyer speaking at political trials. In 1912 he was elected Deputy of the Fourth State Duma from the “Labour Group” (trudoviki), became the faction’s leader and joined a freemason society uniting the anti-monarchy forces that strived for the democratic renewal of Russia.

In October Kerensky began his career as a political lawyer at a trial in Tallinn, where he defended the peasants who had ransacked a local baron’s mansion. He took part in a series of large-scale political trials. In 1910 he was the chief defender of the Turkestan social-revolutionary organization, which was accused of staging armed anti-government acts. The trial went well for the social-revolutionaries; Kerensky managed to prevent any death sentences. In the beginning of 1912 he defended terrorists from the Armenian Dashnaktsutyun party. In 1912 he headed the State Duma commission for investigation of the Leninskie gold mine worker shootings.

In the State Duma, he voiced criticism of the government and earned a reputation as one of the best leftist faction speakers. He then entered the Duma’s budget commission. In June 1913 he was elected Chairman of the Fourth Russian-wide gathering of workers of trade and industry. During the February Revolution, Kerensky was a chief figure and a member of the Provisionary Committee of the State Duma. Later, he took the post of Minister of Justice in the Provisionary Government, initiating such acts as the amnesty of political prisoners, the recognition of Poland’s independence and the restoration of Finland’s constitution. He ordered the return of all revolutionaries from exile. He also started the dismantling of the old court system.

In March 1917 Kerensky officially re-joined the social-revolutionary party and became one of its main leaders. Later he received the post of Military Minister. In this position he did his best to organize the Russian army’s offensive in June. He visited the frontline units and spoke at multiple rallies.

Starting on 8 June (21 June) Kerensky took the post of the Chairing Minister succeeding Georgy Lvov, while keeping the post of Military and Naval Minister. Kerensky tried to garner the support of the bourgeois for the government and to reach an agreement with the right-wing socialistic parties. On 12 June, the army death penalty was restored. New money was released, nicknamed ‘kerenki’. Kerensky also reformed the Provisional Government, creating a “business cabinet” called the Directory. 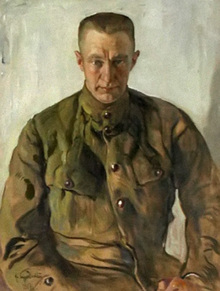 Kerensky used his powers to perform another coup by disbanding the State Duma, the very body that had brought him to power and declared Russia a democratic republic without waiting for a constitutive meeting. To secure government support he created a consultative body, the All-Russian Democratic Council (the pre-parliament) on 7 October 1917. Evaluating the state of affairs in Petrograd (now St. Petersburg) on 24 October as being in a “state of uprising,” he demanded that the pre-parliament fully support the government’s actions. After the pre-parliament accepted a dodgy resolution, Kerensky left Petrograd to meet the troops called back from the frontline to support his government.

The move by the Krasnov-Kerensky troop was unsuccessful. Kerensky also had no success at speaking at the Constitutive Meeting and joining the Czechoslovak corps. In June 1918 Kerensky, posing as a Serb officer, left the ex-Russian Empire for talks on the organization of an intervention. He lived in France, taking part in the constant schisms, fighting and intrigues of the Russian exiles.

In 1939 he married the former Australian journalist Lidia Tritton. When Hitler occupied France in 1940, Kerensky escaped to the United States and when in 1941 Hitler attacked the USSR, Kerensky offered his support to Stalin, but got no answer. He established radio transmissions to the USSR to support the military effort. After the war, he organized the “Union for Russia’s Liberation” but achieved nothing.

When his wife fell terminally ill in 1945, he went with her to Brisbane, Australia and lived with her family until her death in February 1946. He then returned to the U.S. and settled in New York, while spending a lot of time at Stanford University in California where he taught and made a significant contribution to the archives on Russian history.