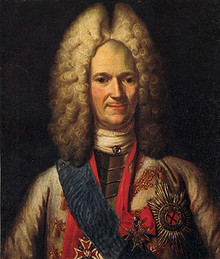 Aleksandr Menshikov rose from a simple stable boy to become the de-facto ruler of the Russian Empire, splitting opinion all along the way. One thing that isn’t in dispute, however, is that Menshikov was one of Russia’s most charismatic figures in a crucial period of its history.

Menshikov’s story was re-shaped multiple times to suit his own needs and those of his enemies and biographers. Aleksandr Menshikov was born on 16 November 1673, to a Lithuanian living in Moscow. Later courtiers would dub him “the swineherd” and “the stable hand”, and although it is not clear whether he ever performed these jobs, he was undoubtedly poor and had to work from childhood. According to one legend, at the age of twelve his father sent him on an apprenticeship with a pie-maker, and he hawked pirogi outside the house of the powerful noble Franz Lefort, who was so impressed by his sales patter that he took him under his wing, putting him on the path to a dizzying career. According to another, he worked in the royal stables, where he was recruited to be one of the young Tsar Peter’s personal servants. Later, Menshikov claimed that his father was related to the ancient family of Russia’s rulers, the Ruriks, and he was impoverished when he was captured in battle; there is little evidence to back this up.

There is debate as to how much education Menshikov received, and whether he was even literate, but all accounts agree that he possessed a lively intelligence, a quick wit, and a remarkable memory. Those qualities helped him stand out among the other servants surrounding Tsar Peter, and the two boys, born less than a year apart, became fast friends almost straight away. He helped Peter create what is known as the “Toy Army” – a regiment of noblemen’s sons who dressed up as soldiers and fought practice battles, but who, once Peter grew up, became his personal guard and the foundation of a new, Westernized military. He also joined Peter during the Grand Embassy in 1697-8, the diplomatic mission-cum-educational tour of Western Europe, during which Peter was shown many technologies and skills he would later import to Russia for his modernization plans. Although Peter and Aleksandr often competed with each other to catch the attention of young, pretty daughters of aristocrats, historians even in Peter’s times wondered whether Menshikov and the Tsar had a romantic relationship themselves. One described their relations as “more love than friendship”, and the two would often sulk and fight, sometimes literally, with several accounts of Peter punching Menshikov until he bled. Menshikov was known in the court as the only man who could soften the Tsar’s violent temper (often alcohol-induced), and the relationship between the two never appears to have flagged, right up to Peter’s death.

Peter I the Great and Aleksandr Menshikov in the Peter I movie.

The battle plans Peter and Aleksandr once practiced in the courtyard became reality as Russia waged the Great Northern war against Sweden (1700-1721) with Menshikov as the pre-eminent commander (along with Count Sheremetyev). As part of his plan to make Russia a great European power, Peter realized that it needed access to the Baltic Sea. An impulsive but brave cavalry commander, Menshikov often led the troops into battle himself, and on one occasion had three horses killed underneath him.  He played a key part in the victories in the Battle of Kalisz (1706) and the decisive Battle of Poltava in 1709 which left the routed Swedish Army of King Charles XII thousands of miles from their homeland, forcing the foreign king into exile.  He was promoted and became Russia’s second-ever Field Marshal. The war allowed Peter to found St.Petersburg, and here Menshikov played a key part as well. He was the first governor of the city, and coordinated the massive engineering work needed to erect a new European capital in the desolate swamp, at the cost of a large part of Russia’s budget and tens of thousands of lives.

Despite becoming a Prince of the Holy Roman Empire, the Duke of Izhora, and being given huge landholdings throughout Russia and Eastern Europe, Menshikov was notorious for his insatiable avarice. Under various pretexts he would confiscate lands and embezzle money from government projects – his wealth consisted of 90 thousand serfs, six towns, and more than a ton of gold cutlery. He built a residence outside of St.Petersburg that mirrored that of Peter himself, the only man in Russia wealthier than Menshikov. A series of high-profile investigations found Menshikov guilty of corruption both at war and in peace time, but no fundamental sanctions followed. Although the Tsar was aware that his closest ally was stealing from the crown, he refused to punish him, saying “I have one hand that I control. It is a thieving hand, but the only one I can trust”.

The death of Peter the Great in 1725 did not mark Menshikov’s downfall, but only made him more powerful.  His former lover and close friend Catherine, the wife of the deceased Peter, became the new Empress, and Menshikov proclaimed himself Generalissimus and became the de-facto ruler.  He even hatched a succession plan – his daughter Maria was to marry Peter the Great’s grandson, who, with the help of a forged will, became the next Tsar after Catherine died.  But a lifetime of advancement unravelled in the space of a few months. The new teenage Tsar Peter II was quickly turned against his protector, and the old aristocratic families united against Menshikov. In September 1727, an order arrived stripping him of all his wealth and titles and ordering his deportation to Siberia.  Within two years, Aleksandr Menshikov was dead, at the age of 56.

Although his career climb as the Tsar’s personal “favourite” was as traditional as any in a medieval monarchy, Aleksandr Menshikov himself encapsulated the spirit of his era where opportunities existed for those prepared to think and act in new ways. His flaws – over-confidence and drunkenness with his own power, lack of respect for the law or consideration for other people – were the collective flaws of the new masters of Russia, who would come to transform the vast country in just a few decades.

Viktor Kochubey Prince Viktor Kochubey was the Russian Minister of Foreign Affairs, and Imperial Chancellor. He is listed among the 129 greatest people in the history of Russia portrayed on a monument erected in 1862.