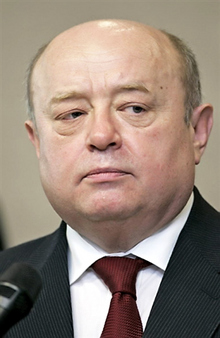 Mikhail Fradkov is the head of Russia's Foreign Intelligence Office, who also was the country's Prime Minister In 2004-2007.

Mikhail Fradkov was born on September 1, 1950 in a settlement named Kurumoch in the Kuibyshev (now Samara) Region to a family of Jewish origin. Mikhail's father was in charge of geological research at a railway construction site. With the railway completed, the family returned to Moscow where his father occupied executive positions at a geological enterprise while his mother was the director of a kindergarten.

In 1972 he graduated with honours from the Moscow Machine-Tool Institute, known by the acronym STANKIN (nowadays Moscow State University of Technology STANKIN), with a specialization in mechanical engineering.

His career started in 1973 when he was posted to the economic section of the Soviet Union's embassy in India, where he served for two years as engineer-interpreter in the office of the economic adviser before moving to the state foreign-trade enterprise of Tyazpromexport (specializing in iron and steel plant exports) in 1975 where he spent almost nine years and managed to get the second higher education on a part-time basis in the USSR Foreign Trade Academy (graduated in 1981).

After the collapse of the USSR

After serving for a year as first adviser of the USSR mission at the Department of the UN and other international organizations in Geneva and as a representative of Russia at the General Agreement on Tariffs and Trade (GATT), on October 19, 1992 Fradkov was appointed Deputy Minister of Foreign Economic Relations in Russia's first reformist government of Egor Gaidar. On Oct. 12, 1993, he was promoted to the position of First Deputy Minister of Foreign Economic Relations. It is believed it was about the time when he might have first met Vladimir Putin who in the early 90s oversaw foreign trade in St. Petersburg’s city administration. 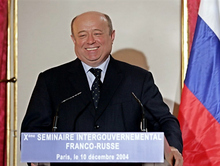 At last, after a government reshuffle on April 16, 1997, President Boris Yeltsin named Fradkov Minister of External Economic Relations, a post which he kept for nearly a year. In another reshuffle on April 30, 1998, his ministry was abolished, and Fradkov was transferred to the Board of Directors of the Ingosstrakh insurance company where he worked for another year, first as chairman, and then as general director.

Meanwhile, a new Ministry of Trade was established, and on May 25, 1999, Fradkov became minister again. He lost his job when Vladimir Putin was elected president in March 2000 as in May that ministry was also disbanded and replaced by the Ministry of Economic Development and Trade.

However, in a sign that the outgoing minister was not out of favour, he was transferred by a presidential decree to the influential Security Council of the Russian Federation (a consultative body of the Russian President that works out the President's decisions on national security affairs), becoming its first deputy secretary on May 31, 2000. Within the Council Fradkov was in charge of economic security issues; colleagues remembered him being a wary and prudent man with a good attitude.

On March 28, 2001, Vladimir Putin appointed Fradkov to the position of director of the powerful Federal Tax Police Service (FSNP), whose job was to put an end to massive tax evasion in Russia. In post-Soviet Russia, the tax police was a widely feared organ that accumulated piles of discreditable materials regarding everyone and was often used as a political weapon in the concealed bureaucratic struggle, with masked gunmen swooping into the offices of those who had angered powerful rivals.

As head of the service Fradkov managed to cut the number of his deputies in half and replaced nearly 100% of the personnel. However, despite of all his 'cleaning' efforts, FSNP was also disbanded in March 2003 during a new government reshuffle in 2003, with the staff and equipment passed to the Drugs Traffic Control Service.

Some experts surmised that the agency was closed not due to its ineffective performance but so as to set up a new super-powerful ministry on its basis – financial intelligence – and incorporate all fiscal agencies, tax authorities, customs services and banking control. Fradkov himself was believed to have put forward the initiative which, however, in the end failed die to a negative reaction from the top. For that reason or another, Fradkov was sent to Brussels to represent Russia in the European Commission with the rank of a Federal Minister, which was actually seen by many as an honourable exile. 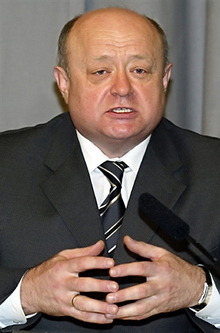 On March 1, 2004, Putin surprised virtually all experts by firing Mikhail Kasyanov , the former prime minister, and his Cabinet and designating Fradkov to the position. No one expected Putin to elevate Fradkov from his rather lacklustre bureaucratic career, as he was not seen as part of Vladimir Putin's inner circle.

Fradkov himself seemed unprepared for the promotion, as he was not even in Moscow for the announcement. But the State Duma was too loyal to be surprised and on March 5 confirmed Fradkov as prime minister (352 votes against 58 with 24 abstentions). On May 12, after the start of Putin's second term, the Duma obediently confirmed Fradkov in the post again (356 against 72 with 8 abstentions).

Upon recovering from a brief shock brought about by the surprising nomination politicians and experts began suggesting some reasons of what could have stood behind it. Some commentators speculated that Putin selected Fradkov as someone who was not a representative of any of the warring clans' in the Kremlin. Putin and his allies have praised Fradkov as experienced, professional and honest. His appointment represented a departure from his predecessor Mikhail Kasyanov, who had on a number of occasions become involved in public disputes with his own ministers and the Kremlin.

Fradkov's time in power coincided with political stagnation in the Kremlin with world oil prices rising and policy reforms from the government slackening. 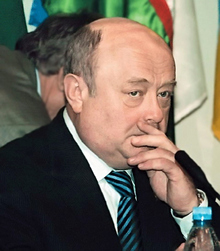 Some observers assumed that Mikhail Fradkov was but an obedient executor of the Kremlin's will who was completely overshadowed by Putin and never lived up to the title of Russia's number two. Many said that the diminutive, moon-faced man with a soft voice and manners coming across as 'I'm small, pay no notice' proved to be the most colourless and un-influential prime minister in Russia since 1991.

A classic Soviet-style bureaucrat, always happier putting off a decision rather than risk taking responsibility for a mistake, Fradkov avoided showing his own political or economic views. However, he proved to be a bit more interested in political infighting than was originally thought and was active in defining his own turf, a fact that sometimes caused public grumbling on the part of some of the members of his cabinet.

In early 2005 during the wave of public protest against monetization of social benefits, according to some sources inside the Prime Minister's secretariat, Fradkov informed the President about his intention to resign. However, Fradkov was told that this issue would not even be examined at the moment, and obeyed.

His term of office came to the end two and a half years later. On September 12th 2007 Fradkov submitted his resignation, along with the government, citing 'approaching significant political events' and saying he wanted to give President Putin 'full freedom of decisions including staff ones' in forming a new cabinet before the parliamentary elections in December 2007 and the presidential elections of 2008.

Head of the External Intellingence Service

Fradkov's last appointment, as some observers believe, is suggestive of his KGB background and allegiance to Putin's siloviki backers (current and former security and military officials). It is possible that Fradkov has always been much closer to intelligence issues than it might seem looking at his official biography.

Aleksey Orlov (Chesmensky) Count Aleksey Orlov was a Russian military leader, a great supporter of Catherine II and a mastermind behind her ascension to the throne.