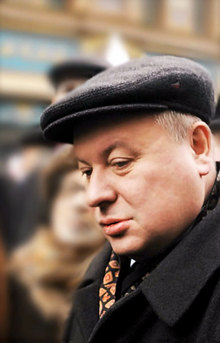 Egor Gaidar was a Russian politician, economist, former Prime Minister of Russia and a man of radical right views on politics and the economy.

Gaidar’s father, Timur Gaidar, was a rear admiral, son of the famous Soviet writer Arkady Gaidar and a military correspondent for the Bolshevik newspaper Pravda (The Truth), a leading newspaper during the Soviet era. Gaidar’s mother was Ariadna Bazhova, the daughter of the writer Pavel Bazhov.

Egor Gaidar was born in Moscow. In 1973 he finished school with a gold medal and, five years later, he graduated from the economics faculty of the Moscow State University, where he studied under the academic Stanislav Shatalin, who was not only his teacher, but also an ideologically like-minded person. In November 1980 Gaidar finished his postgraduate fellowship and received a PhD in economics. He spent the next six years working as a researcher, first at the Moscow State University Economics Faculty, then in the All-Union Research Institution of Systems Studies of the USSR Academy of Sciences, State Committee of Science and Engineering. In 1986-1987 he was the head researcher in the Institution of Economics and Prognosis of Scientific and Technological Progress of the USSR Academy of Sciences.

In 1982 Gaidar met Anatoly Chubais, the future chief ideologist of Russian privatization, in St. Petersburg, where he was invited for Chubais’s economics seminars. Other sources state that he met Chubais and Petr Aven (the future Minister of External Economic Relations in Russia, now a billionaire and the President of Alfa Bank) in 1983-1984 when participating on a state committee researching the possibility for economic reforms in the USSR. In the summer of 1986, Gaidar, Chubais and Aven organized their first open conference of pro-reform economists, after which Gaidar became the acknowledged leader of the trend.

In 1987 Gaidar became the editor of the economics section and member of the editorial board of Kommunist magazine and in 1990 - the editor of the economics section of Pravda newspaper. That same year he headed the Institute of Economic Policy at the Academy of National Economy of the USSR, where he received his Grand PhD. On 19 August 1991, following an attempted Soviet coup d’etat, he left the Communist Party and joined the White House defenders.

In September 1991 he became the head of a working group of economists at the State Council of the Russian Federation. In October, he was appointed Deputy Chairman of the Russian government. Events in Russia’s economic history of that time such as “shock therapy” and price liberalization became associated with Gaidar’s name. He took the post during the period of the Soviet Union’s collapse, when laws stopped working, orders were not executed, security agencies failed, there was no control over external economic activities and customs offices stopped functioning. According to Gaidar, the only way out of a situation where no reserves (budget or external) remained was to deregulate prices.

In 1992 he became Acting Chairman of the Russian Government. As the head of a “pro-reform” government, he took an active part in creating and implementing the Russian privatization program.

In 1992-1993 Gaidar was Director of the Institution of Transition Period Economics and the economic policy advisor of the Russian President. In September 1993 he became First Deputy Chairman of the Council of Ministers. On 3-4 October, during the constitutional crisis in Moscow, Gaydar called on people to go out into the streets and fight for a new regime.

In 1994-1995 Gaidar was a Deputy of the State Duma of the Federal Assembly of the Russian Federation, and Chairman of the Choice of Russia (Vybor Rossii) faction. In June 1994 he became Chairman of the Democratic Choice of Russia (Demokratisheskiy Vybor Rossii) party, and remained its leader until 2001. His colleagues gave him the nickname Iron Winnie-the-Pooh for his characteristic appearance combined with his adamant will and high work capacity.

In December 1998 Russian liberal-democrats united into a social bloc, The Right Cause (Pravoe Delo), whose management Gaidar joined. The following year some members of The Right Cause announced the creation of the Union of Right Forces (Soyuz Pravykh Sil). As a member of the Union of Right Forces, Gaidar entered the Russian State Duma (or the Lower House of Russian parliament) following the 1999 parliamentary elections. In May 2001 Gaidar became the co-chairman of the “Union,” but after its defeat in the 2003 election, he left the party. However, according to the party’s chief ideologist Leonid Gozman, “Gaidar remains the party’s leader without occupying a formal post.”

On 24 November 2006 during a conference in Ireland, Gaidar felt ill and was hospitalized with severe poisoning. Mass media noticed that this happened a day after Aleksandr Litvinenko, a former Russian intelligence officer and sharp critic of Kremlin policies and Vladimir Putin, died of polonium poisoning. But Gaidar soon felt better and the next day went to receive further treatment in Moscow, refusing to comment on allegations of deliberate poisoning.

Until his very last day Egor Gaidar was Director of the Institution of Transition Period Economics, an honorary professor of the University of California, a member of the editorial board of the Europe Messenger (Vestnik Evropy) magazine and a member of the consultative council of the Budapest magazine Acta Oeconomica.

Gaidar is the author of several monographs on economics. He spoke English, Serbo-Croatian and Spanish and was a good chess and football player. Over one hundred of his works have been published in Russia and around the world.

When Gaidar died in December 2009, he was in his second marriage to Marianna, the daughter of the famous Russian science-fiction writer Arkadiy Strugatskiy, with whom he had been engaged since school. The couple had two sons, and Gaidar also had a son and a daughter from a previous marriage to Irina Smirnova, whom he divorced in 1982. His daughter, Maria, is a member of the Institution of Transition Period Economics and the leader of the Democratic Alternative – ‘Yes!’ (Demokraticheskaya Alternativa – ‘Da!’).

On December 16 Egor Gaidar tragically died. The death was caused by an obstructive thrombus.