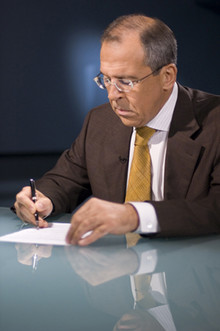 Precise in his definitions and attentive to detail, Lavrov is not your average diplomat. He's very informal in exercising formality, and a master of saying a lot while remaining tight-lipped. He weighs every word, but makes headlines for swearing. He meticulously sticks to protocol, yet has a reputation as a non-conformist.

Known for his expensive suits and impeccable style in front of the cameras, Lavrov sometimes appears before journalists accompanying him on his trips in a worn T-shirt with dancing frogs. He likes to pepper his calibrated foreign policy briefs with edgy anecdotes. And while he is one of the longest-serving foreign ministers Russia or the Soviet Union have had, his colleagues and friends say his professionalism comes second to his engaging personality.

Born into a well-off family of Moscow civil servants, Lavrov was always a good student. Decades after finishing high school, he said his physics teacher had a major influence on him, both personally and academically. He even considered pursuing a career in science, but his mother, who held a lucrative position at the Soviet Ministry of Foreign Trade, persuaded him to choose diplomacy instead.

Lavrov easily made it to the Moscow Institute of Foreign Relations (MGIMO) – one of the most prestigious and closed higher education establishments in the USSR, and Alma Mater for all those dreaming about a career in the Foreign Service. His fellow students described him as a Communist activist, and the center of attention at every party. A keen guitar-player and a budding poet, Lavrov composed the institute's anthem, featuring the following verses:

An admirer of Scotch whisky and Italian cuisine, Lavrov has a reputation as a comfort lover. Yet he is also known to leave behind the hustle and bustle at least once a year to spend some time with his college friends in the Siberian wilderness. An avid rafter, Lavrov has stuck to this tradition for over thirty years. He made his career by extinguishing international tension, but his friends say he's also very good at lighting a fire.