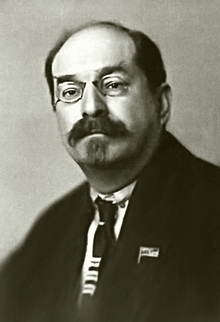 A Soviet politician, writer, translator, critic and art historian, Anatoly Lunacharsky was an active participant in the 1917 October Revolution.

Anatoly Lunacharsky was born in Poltava, Ukraine, which at that time part of the Russian Empire. He became interested in Marxism at the age of fifteen, while studying at the gymnasium in Kiev. In 1895 Lunacharsky entered the University of Zurich, where he studied philosophy and natural science. He focused on analyzing works by Karl Marx and Friedrich Engels, among other materialists, and was greatly influenced by the idealistic views of the lecturer Richard Avenarius. Empiriocriticism, based on the viewpoint that only direct experience could be relied on as a basis for knowledge, became the foundation of most Lunacharsky’s works.

The same year he entered the University of Zurich, Anatoly Lunacharsky joined the Russian Social Democratic Labour Party (RSDLP). He returned to Russia in 1898 and began his revolutionary activity. Within a year Lunacharsky was arrested and exiled.

In 1903 the RSDLP split into Mensheviks (derived from the Russian word “minority”), led by Julius Martov and Bolsheviks (“majority”), led by Vladimir Lenin. Lunacharsky decided to support the latter. Over the next six years the difference in philosophical opinions of Lenin and Lunacharsky sharpened and grew into a political disagreement. Anatoly Lunacharsky had developed ideas of “God-building,” considering socialism as a way of entering the “promised land” on earth, while Marxism saw as a culminate point the day when humankind would be liberated from dependence on nature and the supernatural. 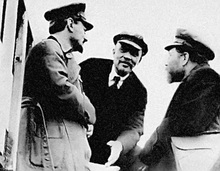 Vladimir Lenin criticized Lunacharsky’s ideas and Lunacharsky didn’t support Lenin’s extremism and insisted on parliamentary means of gaining power. In 1909 Anatoly Lunacharsky, together with Maxim Gorky and Aleksandr Bogdanov (Lunacharsky was married to his sister) formed the left-wing group “Vperyod” (Forward), which was in opposition to Lenin. Gorky, Bogdanov and Lunacharsky started a school for Russian socialist workers on the island of Capri. In 1910 all three revolutionaries moved to Bologna and there continued their teaching activity up until 1911.

In 1913 Anatoly Lunacharsky moved to Paris. After the outbreak of World War I in 1914, he took an internationalist anti-war position. In 1915, Lunacharsky, together with Pavel Lebedev-Polyansky, restarted the social democratic newspaper “Vperyod” with an emphasis on “proletarian culture.” He actively disagreed with the Mensheviks regarding their strategy and tactics in the revolutionary struggle. After the February Revolution of 1917, which resulted in the downfall of the Russian Empire and declaration of the republic, Anatoly Lunacharsky left his family in Switzerland and returned to Russia. He re-joined the Bolsheviks and in October 1917 was appointed Commissar of Education Enlightenment (Narkompros), equivalent to Minister of Education and the Arts. Lunacharsky remained in this position until 1929. His work in this post was considerable but also controversial. He tried to save historical and cultural monuments and even wanted to resign in a sign of protest against the bombing of the Kremlin during the October Revolution. At the same time, Lunacharsky was reported to be involved in the ruining of a number of other monuments, which were later replaced by ideologically-oriented works, mainly of low quality. Anatoly Lunacharsky made an attempt to encourage old Russian intellectuals to cooperate with the new Soviet regime, and tried to protect scientists from persecution. On the other hand, he participated in the mass deportation of great scholars and fired university teachers for political reasons.

Lunacharsky contributed to the development of socialist culture, particularly in the areas of education, theatre, cinema and literature. In his opinion, cultural heritage must belong to the proletariat. As a literary critic and historian, Anatoly Lunacharsky revised and assessed works by leading Russian and foreign writers, studying their art from the point of view of the class struggle and focused on the importance to the cultural enrichment of average working people. As a founder of proletarian literature, Lunacharsky thought that the art of writing must be used for analyzing and criticizing the class system. He took part in organizing groups of writers, believing that soon there would be great authors who would represent the working people. Anatoly Lunacharsky wrote several plays, but their artistic value remains disputable. He also performed a translation of the poem “Faust” by Nikolaus Lenau. 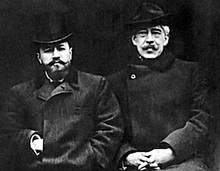 Lunacharsky was considered to be a mediator between the Soviet Republic and foreign culture. He personally knew such outstanding writers as Bernard Shaw, Herbert Wells, Romain Rolland, Stefan Zweig and Bertolt Brecht. In 1929, as the Commissar of Education Enlightenment, Lunacharsky supported the idea of conversion of the Russian language into the international Latin alphabet (instead of the traditional Cyrillic).

In 1929, when Josef Stalin came to power, Lunacharsky, considered too “liberal,” was dismissed from the post of the Commissar of Education Enlightenment. Soon he was appointed as the head of the Learned Council of the USSR Central Executive Committee. Anatoly Lunacharsky worked as an editor of the Literature Encyclopedia, which was published from 1929-1939. From 1930 to 1932 Lunacharsky represented the Soviet Union at the League of Nations and took part in a conference on disarmament. In 1933 he was appointed Soviet Ambassador to Spain, but died on the outward journey. His body was 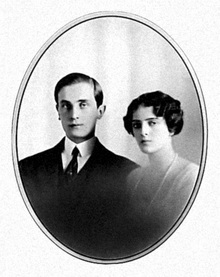 returned to Moscow and buried in the Kremlin Wall Necropolis, which was a great privilege at the time.

The popularity of Anatoly Lunacharsky declined after his death, and only after the 1960s, thanks to the work of his daughter Irina Lunacharsky, his name was remembered and became a symbol of the Bolsheviks era. He became known as a protector of Soviet culture and intelligentsia. Following his revival, a number of streets and institutions were named after Lunacharsky, as well as the asteroid 2446, discovered in 1971.

His second wife was Natalya Rozenel, an actress of the Maly Theater. They met in 1922. Despite a 25-year age difference, Lunacharsky left his family and married Natalya, who already had a daughter, Irina, from her first marriage.