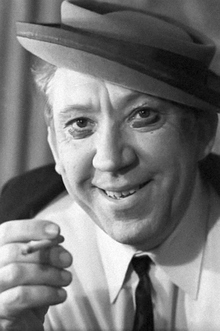 When Yury Nikulin attended his first circus at the age of five the only thing he saw was the clowns....

There aren't many instances where painting your face white, wearing stupidly-oversized shoes and continually falling over in a comic manner will get you to the top of your profession.

In the ring, Nikulin presented a phlegmatic temperament, slow and unsmiling, and to many in the West his personality was reminiscent of the great silent film comedian Buster Keaton. Rich in mimicry, doleful of expression, Nikulin was hailed as “a brainy clown” outside Russia. Simple in style and gentle with children, his only vestiges of make-up were a reddened nose and black lines around his eyes, much different from the grotesquely painted faces of Western clowns. Nikulin, affectionately called Uncle Yury by Russian children, relied mainly upon his wits to earn his place in history as one of the best clowns of the 20th century.

“It is very important to be able to laugh and cry, to rejoice over one's own and others' victories, not to feel angry, not to envy. I dream there will one day appear a formation of kind and wise people on the Earth. Live in peace and accord and remember that every second of laughter adds a minute of life,” Nikulin once said.

Yury Nikulin was born on December 18, 1921 in the town of Demidov in the Smolensk Region. His mother was a garage supervisor and his father a writer of satirical articles - a profession which may have influenced Yury's future career. 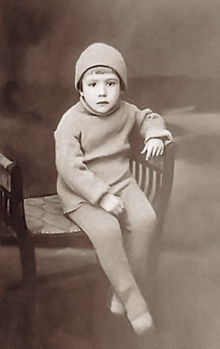 In 1925 the Nikulins moved to Moscow, where the head of the family, Vladimir Andreyevich, wrote for variety shows and circuses. Later he worked for newspapers and conducted a drama circle at the school his son attended.

Shortly after completing his studies, Nikulin was drafted to the army where he served in the flak forces from 1939 to 1946. As a soldier he participated in the Finnish War and World War II, including the defense of Leningrad

He first took up clowning in 1944 when a political officer in his battalion, impressed by his repertoire of jokes, ordered him to organize entertainment for the division, which he did with resounding success.

After the war, Nikulin attempted to enter several theater schools such as the VGIK (the All-Union State Institute of Cinema), the GITIS (the Russian Academy of the Theatre Arts) and the Shchepkin Drama School, but was rejected by all of them.

Finally he entered the clown studio at the Moscow State Circus on Tzvetnoy Boulevard, where he worked hard and successfully completed his studies. By 1950 he qualified as a fully-trained clown. Here, he also met his wife, Tatyana.

Upon graduation Nikulin worked for two years as an assistant to the famous Russian clown Karandash (Mikhail Rumyantsev).

Karandash, who held the title of “People's Artiste of the USSR,” had led the development of Russian clowning away from the coarse buffoonery generally expected, to a simpler and more natural form of humor. Both Oleg Popov, another famous Russian circus clown, and Nikulin started their clown careers as assistants to the great Karandash. 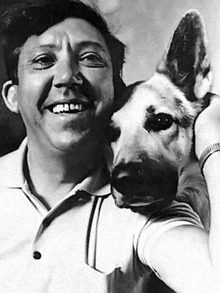 Nikulin was quick to master the main principles which Karandash stressed in his teachings - a good clown must first and foremost be a skilled dramatic actor, sincere and honest in his art. In the autumn of 1950, Nikulin debuted with his partner Shuydin and they soon established a name for themselves as a popular clown duo. Nikulin's own personal popularity grew immensely following his successful screen debut in 1958 in the film “A Girl with a Guitar,” playing the comic role of a pyrotechnic. This was followed by roles in “Yasha Toporkov,” “Nadya's Charges,” “The Dog Barbos and the Unusual Cross,” “Men of Affairs” and many more. His roles in the productions “When the Trees Were Tall” and “Come to Me, Mukhtar!” showed new facets of Nikulin's talents as an actor.

He also starred in the gloomy, yet widely acclaimed film, “Twenty Days without War,” in 1977. In it, he appeared as a great dramatic actor. His typical film roles, however, portrayed him as a slightly silly, average person, witty but never mean-spirited. In the West he has been compared with Cantinflas and Fernandel as well as Jacques Tati. During his career, Nikulin starred in a total of 40 movies. He took on many different roles in the films but never performed miserable or ill-tempered roles. His characters were funny and aroused sympathy and love.

His films are still considered all-time favorites by most Russians.

As a clown, Nikulin performed with his wife Tatyana and his devoted partner Mikhail Shuydin. Together they devised many funny and interesting clown reprises and sketches, often taking situations from the real life and focusing attention on the funny things.

The audience always waited eagerly for their beloved artists to perform. “My profession is to make people laugh, to evoke laugh by all means,” Nikulin said. “And I am always pleased when I cause joy.”

In 1982 Yury Nikulin was appointed General Manager and Artistic Director of the circus. During this time many memorable shows were created, contributing to the circus's continuing success. 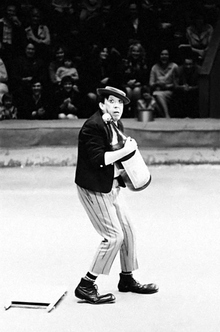 Owing to Nikulin's efforts, a new circus building was constructed between 1985 and 1989. Nikulin was always open to all that was creative and new, including the Experimental Studio which was opened in 1994 under the leadership of Valentin Gneushev, a Russian circus director and choreographer. New shows were continually replenished by young and talented artists and original acts. A big celebration was held in December 1996 to mark Nikulin’s jubilee year – his 75th birthday plus 50 years in the circus.

One cannot imagine the motion picture world or the circus world without Nikulin.

“Notoriety came to me late, when I was almost fifty. I was never intoxicated by this notoriety. No, I just worked, lived, socialized with friends, read...”

A lot of circus performers often take Nikulin's videos along with them when they leave for long tours, stating that without these videos their life would be much more boring. A life-long gatherer of anecdotes, Nikulin published several anthologies such as “Anecdotes from Nikulin” with the invariable autograph: “For joy and fun.” His book “Almost serious” has been reprinted several times.

For many years, Yury Nikulin hosted the TV show “The White Parrot Club” in which famous people shared anecdotes and funny stories from their lives with TV audiences.

Nikulin told the story, for example, of the famous actor who railed against his fancy New York tailor.

“God needed seven days to create the universe and it took you 30 days to make my trousers,” the actor complained.

The tailor answered: “Look at the world and then look at your trousers.”

“In the past, there was a tinge of risk involved. I still remember when political jokes were told in whispers. Russians love to laugh, and they never laugh harder than over something that could get them in trouble.”

Yury Nikulin became the Chairman of the Board of Directors of the Peace Fund in 1992. In 1997 he set up another Fund, "Circus and Charity,” to 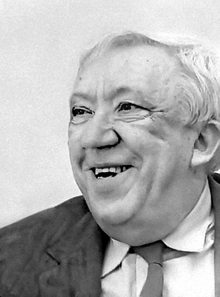 Throughout Yury Nikulin's long life, his thoughts and actions were always wise and fresh. That is why he was much loved by people of all ages; his heart was forever young.

He was one of the best-loved men in Russia and his death was mourned not only by Russians but by tens of millions in the wider Russian-speaking world from Ukraine to Kazakhstan as the actor and comic who more than any other expressed the daily woes and laughter of the ‘Soviet Everyman.’

Nikulin was succeeded in his office at the Nikulin Circus (as it is now known) on Tsvetnoy Boulevard by his son, Maxim. A bronze monument commemorates him in front of the circus. Nikulin died on 21 August 1997 and is buried in the Novodevichy Cemetery in Moscow.

Nikulin's popularity, from the circus ring to the big screen and television, spanned generations, from small children to grandparents, giving him a universal appeal considered rare in the Soviet Union.

“I always believed that those circus people who compel others to burst out laughing are the most important ones.”