Aleksandr Ostrovsky was a Russian playwright who made significant contributions to the development of Russian theater. His plays are still performed, as their plots are still relevant.

Ostrovsky’s father Nikolay was an ennobled attorney and his mother, Lyubov, was the daughter of a sexton. When Ostrovsky was eight years old, Lyubov died, and a nanny was entrusted with the children’s upbringing. Ostrovsky and his three siblings were schooled at home and spent a lot of time in the family library, getting acquainted with Russian and foreign literature.

In 1835, Ostrovsky entered a local gymnasium and graduated in 1840. His father married again, but his new wife, a socialite, paid little attention to the children.

By the time of his graduation, Ostrovsky had decided on his career: he wanted to be a writer. Nikolay, however, had others plan for his son. Ostrovsky was sent to the law department at Moscow State University, but dropped out in 1843 after a conflict with one of the professors.

His father did not give up. According to his father’s wishes, Ostrovsky got a job as a magistrate's clerk. At this position Ostrovsky had an excellent chance to observe all kinds of people dealing with all kinds of problems. Nikolay tried to help Aleksandr become a lawyer, but unknowingly helped him to become a playwright.

Ostrovsky himself considered January 9, 1847 the day he “truly acquired faith in his vocation”; on this day the drafts of his comedy “It’s a family affair – we’ll settle it ourselves” were published in the newspaper Moscow City Leaflet. The play tells a story about a merchant who fakes bankruptcy to avoid paying debts. 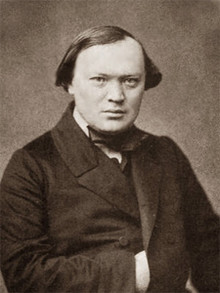 In 1850 the play was published. It gained significant popularity and was given good reviews by famous writers Nikolay Gogol and Ivan Goncharov. The characters and situations depicted in it were realistic enough to make the Moscow merchants feel deeply offended. As a result, “It’s a family affair…” was banned from the stage. The author had to say goodbye to his career in the magistrate and was placed under police surveillance, only lifted in 1855 when Alexander II came to power. The ban on the play was lifted only in 1860.

Ostrovsky started to work at The Moscow Citizen magazine and entered various artistic circles. Every theatrical season, his new plays were shown on the stages of Moscow and St. Petersburg theaters. In 1856, Ostrovsky began to work for a literary and political magazine The Contemporary, which propagated the ideas of a democratic revolution.

The same year, Great Prince Konstantin offered Russian writers an assignment: to visit different Russian regions and to describe the industry and everyday life there. Ostrovsky chose the Volga region and took a cruise down the Volga River. Inspired by what he saw, in 1860 he wrote his most well known drama called The Storm.

The Storm is a tragic story about an unhappily married woman named Ekaterina. Her mother-in-law is cruel and dominating; her husband, Tihon, is weak-willed and loves his mother much more than his wife. Worse still, her best friend does not understand her. One day, she meets a man named Boris and falls in love with him. It is possible for them to be happy, but being unfaithful is a sin for Ekaterina. Tormented by her conscience, she confesses her love to her family and kills herself. 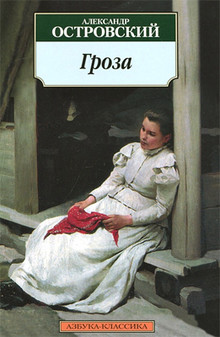 Book cover of The Storm play by Aleksadnr Ostrovsky

A storm is mentioned by the characters several times, but does not actually take place: everybody is only waiting for it.

As the political writer and literary critic Nikolay Dobrolyubov saw it, this was a play about the changes Russian society was undergoing in the 1860’s. By the time the drama was published, Alexander II had not carried out his liberal reforms yet, but was making his preparations. Among other things, he was going to abolish serfdom and introduce equality in the eyes of the law.

In his article, Dobrolyubov described Ekaterina as “a ray of light in a kingdom of darkness”. Ekaterina’s family and the other town dwellers symbolized the ignorance and the conservatism of the “old world”.

In 1866 Ostrovsky headed the repertory department of the Moscow Imperial Theaters. He had developed the reforms he wanted to introduce to the Russian theater, and so he started to carry them out. For contemporary people, even for those of us who don’t feel strongly about the theater, these reforms seem normal, while for the 19th century Russians they were great innovations.

For example, Ostrovsky insisted that every actor in the play is important, not only the one playing the lead. It was Ostrovsky who introduced the concept of the “fourth wall” to Russian theater, and he was the first to pay great attention to the characters’ diction.

The same year, he organized a theater studio. Many famous Russian actors started their careers there. 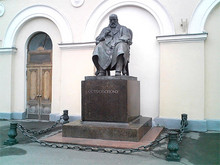 In 1886, Ostrovsky died, and was buried in Kostroma region, in the village where his father and stepmother had spent their old age.

Aleksandr Ostrovsky was married twice and had four sons and two daughters from his second marriage.

His literary heritage consists of 47 original plays, 22 plays he translated from Italian, French, Spanish, and Latin, and 7 plays he co-authored with various writers.