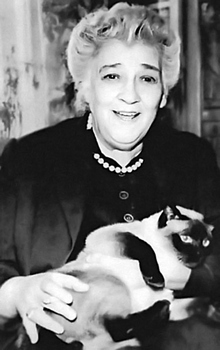 If you ask in any street of any Russian town who Ranevskaya was, in 99 per cent of cases you’ll hear, “She was a legendary actress, of course!”, and only a tiny 1 per cent will remember that’s also the name of a Chekhov character. Her talent, charm, wit, sharp tongue and – for the time – unbelievable straightforwardness earned her the absolute love and adoration of the public.

She was born Faina Feldman into a rich Jewish family and attended a girls’ school in the city of Taganrog where she took acting classes. In 1915 she moved to Moscow where she lived in a tiny room and studied acting seriously. She took all the acting jobs she was offered, including those that paid miserable salaries with small private theatres traveling across Russia.

One day Faina Feldman was coming out of a bank where she’d received cash sent secretly by her mother to support the young actress. A gust of wind tore the banknotes out of her hands, all at once. She looked at the money and said, ‘It’s so sad to see them flying!’ A passer-by heard the words and remarked that only Chekhov’s character Ranevskaya could say it, thus Faina found her stage name.

An actress worth a theatre

Ranevskaya never was beautiful – not by any standards. But it wasn’t her face that attracted viewers to her films and stage works. She was an actress with a talent so enormous that people said she’s worth a theatre, and often they came to see Faina Ranevskaya, not the film or play itself. 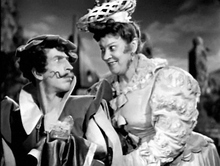 One of her most memorable appearances was in the role of the greedy stepmother in the 1947 Soviet film Cinderella. Generations of children across the USSR grew up mimicking her hilarious ‘Too bad your kingdom is too small, no place to show what I can really do!’ and ‘Mariana, stop crying! The king is a widower, I’ll have you settled!’

She was a close friend of Marina Tsvetaeva, Anna Akhmatova, Vladimir Mayakovsky and Osip Mandelstam. Akhmatova used to say that Ranevskaya was a child that ‘is now 11 and will never turn 12’. Although most of her roles are comic, her personal life was nothing but a tragedy.

She’s quite possibly the only actress to acquire such tremendous fame and yet to remain untouched by any recorded history of scandalous relationships and ugly break-ups. Faina had admirers, but that’s all we know of her personal life. There’s some gossip she had feelings to Marshall Tolbukhin, others whisper she preferred women and had an affair with Anna Akhmatova, but there’s no proof that any of these theories had any foundation.

All her life she was lonely. She never got married and ended all her pregnancies with an abortion. The only creature she lived with was her mongrel dog nicknamed Boy, whom she loved wholeheartedly. She adored the dog the way a woman of such immense passion could love her only child, and cared so much she always left the door to her apartment open so that the dog could enter when it pleased. When sick, Ranevskaya never went to hospital as she was afraid Boy might feel abandoned without her.

During a rehearsal one day Faina Georgievna was very harsh with a young actress, causing her to break into tears. In the evening of the same day she called to apologise saying, ‘I’m so lonely, all of my friends have died, all my life is work… I suddenly felt jealous of you. Jealous of that light touch you work with, and for a split second I hated you for it. And I work hard. I’m obsessed with fear of the stage, the future audience, partners even. I’m not being capricious, my girl, I’m scared. It’s not my pride. I’m not afraid of failures or successes – or how do I explain it? – it’s my life, and it’s so scary to handle it wrongly!’

Ranevskaya’s colleagues and friends remember her as a witty, sharp-tongued and sometimes explosive character. But not one man on Earth can say she was greedy. Her generosity became just as famous as her brilliant acting. People used to say, if you are needy just find Ranevskaya on the streets of Moscow and ask her for money and she’ll definitely give it away without asking a single question.

Every actor in the theatre owed her money, but she never remembered who and how much. Ranevskaya herself lived modestly, though, and the only luxury she allowed herself was drinking tea from a samovar while soaking in a hot tub. Her maids stole from her, and she never could stop them or fire them. Once a maid stole her fur coat and an expensive crystal vase, and Ranevskaya only said she was sorry because she’d bought nice shoes to match the coat.

Faina Georgievna was already 65 when KGB decided they want to use her services as a secret agent. She invented a whole story telling a young security agent she had the nasty habit of talking in her sleep and, since she only owed a small room in a communal apartment, all the neighbours could overhear state secrets. The young agent was so impressed by the story, Ranevskaya got an apartment of her own, but never became part of any secret service.

Not too many people under 25 can now boast that they’ve seen movies with Faina Ranevskaya, but it’s her jokes that everyone can quote. She were spontaneous rather than scripted beforehand and demonstrated her outstanding mind. It was not a case of homework well done, but a comic reflex. 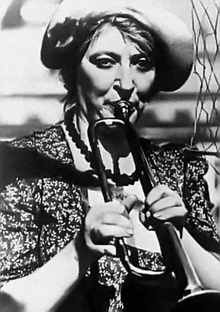 She died at the age of 88 leaving behind a legacy of 25 films. She had also earned endless public admiration.

When asked ‘Are you sick, Faina Georgievna?’ she answered, ‘No, I just look like it.’

Faina Ranevskaya walks about her make-up room totally naked and smokes. A theatre director walks in without knocking and freezes at the door. She says, ‘Am I shocking you with my smoking?’

Ranevskaya invites someone to visit her and says, ‘The doorbell is not working, so when you come, knock with your feet’. ‘Why feet?’ they ask. She answers, ‘Cos you are not going to come empty-handed!’

Ranevskaya tells a woman that she’s still young and good-looking. The woman answers, ‘I cannot give the same complement to you!’ Ranevskaya replies, ‘You should have followed my suit and lied!’