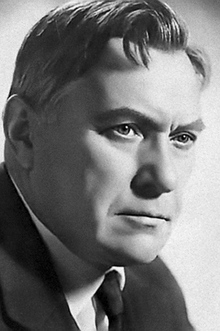 The last century brought many remarkable actors, but few were as popular as Boris Chirkov. He was the most admired film celebrity in the Soviet Union during the 1930s and 1940s. Making his cinematic debut in 1927, he went on to play close to 40 roles. Chirkov first attained fame for the role of Maxim, a revolutionary worker from St. Petersburg, in “The Maxim Trilogy,” directed by Grigory Kozintsev. It took Chirkov six years to play the lead in the movie. He even had to leave the theater for a time as filming made it impossible for him to take part in rehearsals.

Chirkov was born in Lozovaya-Pavlovka (now the town of Bryanka) in the province of Ekaterinoslav in the Russian Empire (now Losovaya, Ukraine). He was the older of two children in a poor peasant family. His mother was the niece of the Soviet politician Vyacheslav Molotov. Boris Chirkov spent his childhood in his mother’s hometown of Nolinsk in the Vyatka Province where he started acting at the Nolinsk Town Theater. He was also brought up as a religious Christian, and with his good voice and vocal talent, he was a regular singer with the Boys’ Choir at the Nolinsk Church.

In 1919 Chirkov graduated from Nolinsk’s junior college and soon started working as a teacher at the town’s secondary school. In 1921 he moved to Petrograd (now St. Petersburg). He entered the Polytechnical Institute to study engineering. But he was desperate for acting, and just a year later, he switched to the Institute for Theatrical Arts. He was a very promising and talented student and graduated as an actor in 1926. His classmates were Nikolay Cherkasov, Glikeriya Bogdanova-Chesnokova, Aleksandr Borisov, Nikolay Simonov and other notable Russian actors.

Chirkov began his professional acting career at the Leningrad Theater for Young Audiences. His first role was Sancho Panza, while Nikolay Cherkasov played the tallest Don Quixote ever in Russia. Chirkov was very short and Cherkasov was extremely tall, and both were very talented, so the pair looked unforgettable. At the theater he met Elizaveta Uvarova. He became a fervid book lover and a keen reader, living together with Elizaveta. Nearly all booksellers were acquainted with him as he spent a lot of money acquiring rare and expensive books.

During the 1920s Chirkov performed in a popular stand-up comic trio with Nikolay Cherkasov and Vladimir Berezov. Chirkov was a good-natured person and he was at his best playing in the much-needed comedies of the times.

In 1927 Chirkov made his film debut as an actor in the silent film “My Son.” He went on to play a number of silent roles until 1934 when he acted in the legendary film “Chapaev.”

In the thirties Chirkov shot to fame with his leading role as the revolutionary leader, Maxim. It was a triumph for all the crew and actors of the movie. Everything came together in the film: acting by Boris Chirkov, directing by Kozintsev and Leonid Trauberg and music by the young and very promising composer Dmitry Shostakovich. Chirkov's fame was such that people from all over the USSR wrote letters addressed simply to “Maxim, Leningrad.” For

Boris, Maxim was an excellent study in the development of character. The protagonist is a sort of Soviet Everyman. He starts out as a rather heedless young worker and progressively becomes entangled in trade union activity, which is viewed as subversive by the owners of his factory and the Tsarist authorities. In other words, “The Maxim Trilogy” succeeded in expressing the development of the Russian Revolution in terms of the revolutionary development of one individual.

Following the success of the trilogy Chirkov was offered many remarkable roles. He played Stepan Lautin in “The Teacher” (1939), the third film in Sergey Gerasimov's trilogy of tributes to the “new generation” of working Soviets. Boris Chirkov headed the cast as Stepan Lautin, a country boy who

seeks out success in the Big City. Through pluck and luck, Lautin realizes his goal, only to give it all up to return to his home village to apply the life lessons he's learned as a provincial schoolteacher. Chirkov also starred as Denis Davydov in “Kutuzov,” as the surgeon Chizov in “True Friends” and many others. He became a national celebrity and was awarded the Stalin Prize.

In 1940 Chirkov moved to Moscow. As one of the most popular Soviet singing actors, he also starred in movies where he had a chance to appear singing. In 1946 he was awarded his second Stalin Prize for his brilliant performance as the composer Mikhail Glinka in “The Great Glinka.” Boris Chirkov's delineation of the composer was expressive and fervent but at times too flamboyant for conviction. From 1950 - 1965 he was a permanent 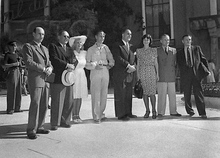 Chirkov was awarded the Order of Lenin in 1937. He was not only a film and theater actor, but also the author of numerous books and articles. His autobiographical novel “Azorskie ostrova” (“Azor Islands”) was dedicated to his mother. He was also a good teacher.

Chirkov refused to be a recipient of a state pension from the Soviet state, citing that there were too many people who needed more help than he did. Chirkov worked hard and was a very kind-hearted man. He survived four heart attacks over the course of his life. One day Boris Chirkov was invited to the Kremlin for a high-level meeting as the member of the Committee for the Lenin Prize Award, and there he had his fifth and fatal heart attack. The most celebrated film star in the history of Russia was laid to rest in Novodevichy Cemetery in Moscow.