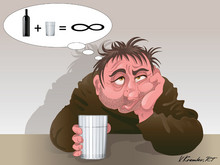 Zapoy is binge drinking which leads to consumption of large amounts of alcohol in a short period of time. It’s not that hard to find this kind of “lifestyle” in many countries worldwide. In some cases, it is the synonym of social drinking – like in Britain, where group beer consumption is one of the features of social life. Zapoy, the Russian binge drinking, is based on the consumption of strong alcohol – mostly, vodka.

There does it come from? When workers at the enterprises all over Russia got together after work, drinking was the only pastime they had. For many people it was the only way to forget all the hardships of their work. Artists and noblemen alike were, in Russia, highly susceptible to zapoy. Here’s a story about the Governor of one Siberian region (many say it’s true but the name of the official has never been revealed): after his three-day zapoy, he realized that he had forgotten to wish Tsar Alexander III a happy birthday. He thought a little, and sent a telegram to St.Petersburg with the following text: “Been drinking health of Your Royal Highness for three days”. Alexander III was himself partial to zapoy. That’s perhaps why the answer was very compassionate: “Thank you very much but it’s about time you stopped”.

This syndrome paralyzed many talented people throughout the country’s history. One of the greatest Russian composers of the 19th century, Modest Mussorgsky, drank himself to death at the age of 42.  The brother of Russian poet Aleksandr Pushkin often “went off into zapoy”, as Russians put it. There is evidence that Pushkin presented several books to his brother with advice on how to stop binge-drinking. Many talented singers, songwriters and playwrights (such as Vladimir Vysotsky, Alexander Vampilov and Vasily Shukshin failed to recover from their zapoy.

The writer Venedikt Erofeev wrote a whole novel about zapoy. It’s called Moscow-Petushki. A Poem. The main character travels by suburban train to a small station to meet his loved one, drinking and pondering about the philosophy of life along the way. He consumes alcohol on a regular basis and sometimes his body fails to accept it. Each chapter in the “poem” lasts from one station to another. The shortest is Chapter Two. Its entire text is, “And I drank immediately”. One assumes that he was coming back to his senses for about 10 minutes until the train pulled up at the next small station. He has several more shots after that.

There were rumors that Russian President Boris Yeltsin was also partial to zapoy. People assumed this because of his unpredictable actions in public – like conducting a military orchestra in Germany and failing to get off the plane to meet the prime minister of Ireland after drinking. He stopped drinking heavily after undergoing heart surgery in 1996.

The more often a person goes into the state of zapoy, the more dependent he gets on alcohol. It depletes the blood cells, which leads to a desire to drink more – the body simply fails to process alcohol when it is consumed in huge portions. Zapoy usually lasts several days – but in such large doses, vodka becomes a poison. The drinker falls into depression and starts to neglect his usual responsibilities like going to work and taking care of the family. The behavior of the person becomes reckless. The longer zapoy lasts, the more impaired the memory becomes – the person stops hearing what others are saying. His speech becomes slow - in most cases it’s hard to make out what he says. A two-week drinking binge may cause delirium tremens – a state from which many people fail to recover.

According to the statistics of 2000, 10 per cent of Russian men aged between 25 and 54 had at least one zapoy a year. According to the same research, almost half of the working men in Russia who die are killed by alcohol abuse.

How can zapoy be cured? There are two traditional ways. The first involves taking a small dose of alcohol the next morning after the binge and trying to abstain from drinking the following day. The second one is good old rassol – a mixture of salt water and herbs that is taken the morning after. It works to reduce the amount of alcohol in the body, while helping retain water and stabilizing the work of the heart and muscles.

In Russia and the USSR, helping those who drink was a prerogative of the state and municipal authorities. In 1902, Russian Doctor Fyodor Archangelsky developed the idea of the vytrezvytel’ – a sobering-up station to help drunken workers who go on a drinking binge. They still exist now. In the 1960s, Soviet doctors also developed a system of long-term zapoy treatments. If a worker kept going on drinking binges, he could be sent by a court to a Medical Labor Center for 1 to 2 years. The percentage of recovery was very low though. In 1994, these centers were abolished due to a lack of funds by a decree of Boris Yeltsin.

After the collapse of the USSR, private medical centers sprang up to cure zapoy. Thousands of links will pop up if you type “zapoy” in any Russian browser. They offer the patients injections of salt and vitamins which take hours and irritate the patients. But the doctor has to come up with an individual formula that would both purify the blood and restore the sound sleep of each patient.

There are more radical methods, of course, – like plasters and so-called coding procedures. But one has to remember that every code can easily be un-coded. If a person decides to drink again – nothing can stop him. The periods of abstinence of a person who is susceptible to zapoy can even last up to 3 years. But this does not guarantee that the person will never turn to binge-drinking again – a lot depends on his willpower.

President Dmitry Medvedev has come up with an initiative to halve consumption of alcohol in Russia by the year 2020. This is a very challenging task and the objective, according to the government and medical officials, is not only the reduction of vodka production in the country. Over the last 10 years, the percentage of those who indulge in zapoy with beer and light cocktails has soared. So the fight against heavy drinking goes on – just like in the times of Doctor Archangelsky at the beginning of the 19th century.