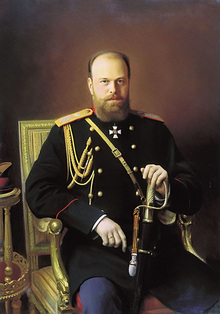 During the reign of Alexander III Russia’s prestige abroad rose to unbelievably new heights and his country thrived in peace and order. During all the years of his rule, Russia was not involved in a single major war. For this he was dubbed “The Peacemaker.” He was considered the most Russian, the most austere and the most serene Tsar. He took the throne when Russia was at its worse, when revolutionary terror raged, and passed it onto his successors perfectly pacified.

Alexander III was the second son of Alexander II and Maria Alexandrovna. Brought up as a Grand Prince, rather than a future Tsar, he was destined for a military career. However, fate decided otherwise. In April 1865 his elder brother Nicholas suddenly died and as of that moment Alexander was proclaimed the heir to the Russian throne.

With the death of his brother, Alexander inherited more than just the throne. While on his deathbed, Nicholas insisted that he also take his fiancé. In October 1866 Alexander married the daughter of the Danish King, Princess Dagmar, who took the name of Maria Fyodorovna after her conversion to Orthodoxy. Alexander III was an exemplary family man. He was deeply

attached to his wife, whom he called “Minnie.” Their marriage was a happy one. Maria Fyodorovna bore him six children. 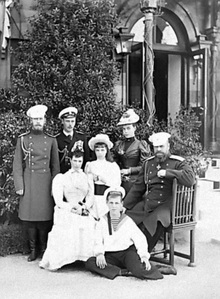 Alexander became the Tsar of Russia after revolutionaries assassinated his father in March 1881 and was crowned in Moscow on 15 May 1883. Alexander was badly shaken by his fathers’ death and this caused a profound change in the political course of the country. To him the murder of his father, also hailed as “the Liberator,” who had freed the serfs and was on the verge of signing into law Russia’s first constitution, proved fatal to these reforms. Alexander abandoned his father’s plans of granting the constitution and declared that only “absolute autocracy” in the form it was practiced during Peter I and Nicholas I could fight the revolutionary movement.

Alexander III introduced some harsh security measures to fight the terror. He executed all those responsible for his father’s death as well as all direct leaders of terrorist revolutionary groups; he tightened police oppression and increased censorship of the press. The royal family left Petersburg for their country palace in Gatchina; from here Alexander set about restoring law and order in Russia. He was determined to strengthen autocratic rule and quickly dismissed any liberal proposals in government. Just as he believed in God, he sacredly believed in a special destiny for Russia, void of Western reforms.

As his father before him, Alexander encouraged the development of trade and industry and imposed customs duties on imported goods to recover Russia's economy, which had suffered from the deficit created by the Russian-Turkish war of 1877-1878. He also introduced a higher degree of frugality and accounting in state finances, in this way liquidating the budget deficit. During his rule industrial development increased and the construction of the Trans Siberian Railway began.

Unlike his predecessors, Alexander III displayed extreme caution in foreign policy. According to the historian Boris Krasilnikov, “he avoided external conflicts, especially wars, fearing they would only exacerbate class conflicts and lead to revolution.” However, despite his earnest desire for peace Alexander still worked on strengthening Russia’s military power. His country was always ready to fight any foreign aggression. 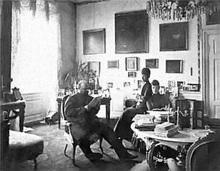 Russia’s influence over Europe was generally accepted. In one famous episode, when Alexander was fishing, the Minister of Foreign Affairs came running to ask him if he would immediately see some western power regarding an important issue. Alexander replied: “When the Russian Tsar fishes, Europe can wait.”

In the fall of 1888, Alexander III and his family embarked on a tour of the empire. Traveling by train, the royal family was approaching Kharkov when the train derailed and crashed. The carriages flew down from a high embankment. The walls of the dinning room car, where the Tsar was at time, crashed under their own roof. Twenty-three people perished, but none of the Romanovs were even injured beyond some minor bruises.

The train accident astonished Russia. The following day every newspaper

carried the details. Some said that the tsar lifted the edge of the carriage roof on his shoulders to allow his loved ones to flee the wreck. One newspaper wrote, “God did not permit misfortune for Russia. The tsar, tsarina and their children were preserved for the Fatherland.” It was not known at the time, but the Tsar had suffered a severe bruise to his kidney that would later contribute to his death on 20 October 1894.

Although of German blood, Alexander III was of true Russian character. He was a deeply religious man and tried to do everything for the Orthodox Church that he considered necessary and useful. He was a deeply moral and honest man of rare kindness, quite cheerful and witty. According to one legend, a district court sentenced a peasant man to six months in jail for spitting at a portrait of Alexander III. When the Tsar heard about the incident he burst out laughing and said: “Why!? He spat at my portrait and for that I have to feed him for six months? Gentlemen, you have gone mad. Release him and say that I, in turn, don’t give a damn about him either. And let’s be done with this. Big deal!”

Alexander III’s reign was short lived and when he died he left behind his work unfinished and an heir unprepared to rule. The whole world reacted when the news of his death reached them. The respect for him was simply amazing, as the French Minister of Foreign Affairs, Emile Flourens said, “Alexander III was a true Russian Tsar, one of a kind that Russia has never seen before. Of course, all the Romanovs were devoted to the interests and the greatness of their people, but spurred by the desire to give their nation a Western European culture, they sought ideals outside of Russia… Emperor Alexander III wanted Russia to be Russia, so that it could, above all, be Russian and he then set the examples best himself.”

Alexander III was buried in the Fortress of St. Peter & Paul in Saint Petersburg, Russia. His son, Nicholas ascended the throne and would become the last Tsar of Russia. Maria Fyodorovna managed to escape from Russia after the Revolution, dying in Denmark in 1928 at the age of eighty-one.

One of the most beautiful bridges in the heart of Paris the “Pont Alexander III” was named after the Tsar.

Alexander I One of the key statesmen of the 19th century, Alexander I is one of the most mysterious and controversial figures in Russian history.