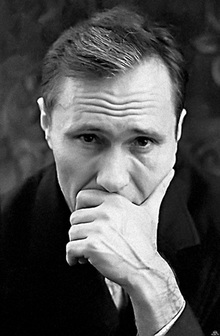 A famous Russian writer, film director and actor, Vasily Shukshin has always been loved by the general public. Shukshin’s works are focused on the simple, though dramatic and heroic lives of common people. His unique and easily recognizable style is characterized by sincerity, wisdom and power.

Vasily Shukshin believed that real artists must press themselves until they become geniuses. With everything that he did in his life, Shukshin certainly pushed himself to the limit, which is probably why he died before his time.

Vasily Shukshin was born in the village of Srostky (Biysk Region, Altay Region). His parents were peasants of medium welfare. In 1930, when Soviet authorities introduced their collectivization policy, forcing peasants to give their land and household possessions to collective farms, Vasily’s father lost all of his wealth. Still, this didn’t save him from sanctions and in 1933 he was arrested and executed by shooting. Vasily Shukshin’s mother, left with two small children and no apparent means of survival, was on the edge of killing herself and her children, but found the strength to fight for life.

When Shukshin’s stepfather died during the Second World War, 13-year old Vasily became the only man and breadwinner in the family. At the age of 16

he left his village, and for two years (1945-1947) studied in the Biysk Automobile Technical School. Shukshin had to quit his studies though, and went to work to support his family. 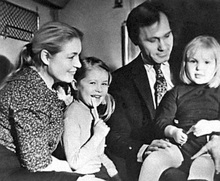 He spent several years working as a mechanic at different plants and in 1950 began his military service in the Black Sea Fleet, in Sevastopol. At this time Shukshin started writing his first stories, though his only readers at that moment were his military comrades. When Vasily was diagnosed with a gastric ulcer, which caused him much pain and suffering, he was discharged from his military service.

In 1953 Shukshin returned to his native village of Srostky and married Maria Shumskaya. Shukshin decided to finish his previously interrupted secondary education, and passed all his examinations without attending classes. Soon he started working as a school director and a teacher. The schools in post-war times lacked both professional staff and basic maintenance and Shukshin did his best to provide at least some education to his fellow villagers.

In 1955, Vasily Shukshin’s dream to become a writer brought him to Moscow, where he hoped to enter the script-writing faculty of the All-Union State Institute of Cinematography. In order to provide her son with some financial support for his education, Shukshin’s mother sold a cow, one of the most valuable assets for a villager at the time.

The university entrance examinations played a very important role in Vasily’s future. The admission committee didn’t feel like reading a thick notebook of his stories, written in small hand, and recommended he go to the acting faculty. Shukshin, puzzled about what to do next, heard about the faculty of directing, and applied to study there. Surprisingly, he hadn’t heard about the job of a film director before that, and thought that actors just gathered together and decided themselves how to shoot a film! As it turned out, Vasily Shukshin was to become one of the most famous directors in the Soviet film industry.

In 1958 Shukshin starred in the movie by Marlen Khutsiev “Dva Fyodora” (Two Fyodors), which brought him popularity as an actor, along with many offers from other leading directors. Within a short period of time he acted in a number of films, among them “Zolotoy Eshelon” (Golden Echelon), “Prostaya Istorya” (Simple Story), “Kogda Derevya Byli Bolshimi” (When Trees Were Big) and others. 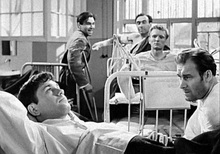 At the beginning of the 1960s Vasily Shukshin achieved his first success as a writer. His stories were published in several journals and in 1963 Shukshin’s first book, “Village Inhabitants,” was published. He soon wrote a script based on two of his stories for his first full-length movie “Zhivyot Takoy Paren” (There Is Such a Lad), which was presented in 1964 to rave reviews. The movie received the main prize at the international film festival in Venice.

In 1965 Vasily Shukshin began working on his new film script, “Stepan Razin,” about the 17th century Cossack leader who led a major uprising against the Russian Tsar, and was executed in Moscow. Shukshin put all of his strength into this project, intricately researching the historical figure and the epoch in which he had lived. Unfortunately, the authorities refused to fund the project, claiming that it was too expensive and didn’t cover modern subjects. The director, deeply disappointed by these bureaucratic obstacles, came up with another idea - to film his own satirical fairy-tale “Tochka Zreniya” (Point of View). But, he received another refusal, this time because, according to officials, viewers didn’t need to laugh at their mistakes and troubles in the year of the 50th anniversary of Soviet rule. Understandably, this was a huge blow for Shukshin.

Vasily Shukshin, as many talented people of his times, saw and experienced the controlling and oppressive power of a tyrannical state system, which ruined many lives and dreams. Shukshin, feeling unable to fight against the injustice, began seeking solace either in heavy drinking or in the peaceful nature of his native village. Alcohol dependency almost led the talented director to suicide, but with his friends’ help he managed to overcome this tough time. Vasily quit drinking only after the birth of his two daughters, Maria and Olga, eight years before his death. As Shukshin’s second wife, the famous actress Lidia Fedoseeva-Shukshina, said: “The children saved him.” 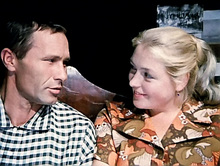 In 1973 Vasily Shukshin starred in the film “Kalina Krasnaya” (The Red Snowball Tree), which he also wrote and directed. The picture tells the story of the dramatic life of a former convict, who, according to Shukshin, became a criminal “not because he liked it, but due to a concourse of circumstances.” While working on this project, Vasily Shukshin suffered from acute gastric ulcer attacks, and the very fact that he finished the film was a miracle. When “Kalina Krasnaya” was released in 1974, the movie immediately had an incredible success among viewers, and in the same year it was awarded with the grand prize at the film festival in Baku.

Vasily Shukshin’s films were always very popular among the general public, and the reason for this was that Shukshin’s works showed the simple, though hard lives of common people. He described the contradictions between the impersonal nature of an urban city and the natural character of a village. Vasily Shukshin’s main characters were usually humorous and a little sarcastic, whilst always openhearted and sincere. He often portrayed people from Russian villages, plain hard-workers with their original, sometimes eccentric personalities, who were able to perform great feats in their every-day, seemingly non-heroic, lives. 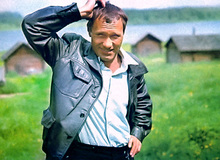 Also in 1974 Vasily Shukshin was invited to perform as an actor in Sergey Bondarchuk’s film “Oni Srazhalis za Rodinu” (They Fought for Their Country). According to Shukshin’s friends, he worked hard throughout the shooting, and looked rather good and cheerful. His colleagues remember that the day before his death, while Shukshin was waiting in a makeup room, he started drawing pictures on a pack of cigarettes. When asked about his drawing, he said, “Well, these are mountains, sky, rain… a funeral, generally speaking.” This was one of the many moments that those close to Vasily Shukshin would later interpret as a sign of his forthcoming death.

Vasily Shukshin died in his cabin on a ship where he lived during the shooting of the film. The official medical report stated heart failure as the reason of his death, though there were many speculations that the famous director was killed because of his anti-Soviet political position and rebellious character.

Shukshin’s funeral was attended by thousands, who came to pay their last respects to this outstanding figure. By the end of the memorial service Vasily Shukshin’s grave was covered in braches and red berries from the snowball tree.