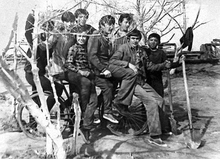 Subbotnik (from the Russian word subbota meaning Saturday) is a day of unpaid labor, usually on a Saturday. Originally it was voluntary and it had the idea of uniting the revolutionary minded masses and promoting the ideas of socialism through labor.

However, as the enthusiasm among the people dwindled, subbotniks simply became the means for the ruling class to get free work from their employees under the cover of comminist ideology. Eventually, subbotniks were reduced to a day or two a year, when people came together for major spring cleaning at their work places or home neighbourhoods.

Nowadays subbotniks still take place, but they have lost their ideological aspect and have again become purely voluntary days of labour. 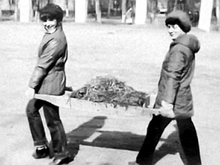 People in the Soviet Union believed that a bright future awaited them, but to reach it – they had to work hard. They toiled and moiled day and night but never seemed to get any closer to the long-awaited future.

So they started thinking it was because they didn’t work enough and decided they needed to work during their free time as well. That was how the Soviet subbotnik was born.

Together with Sunday, Saturday was an official day off in the USSR. Why would anyone need both days off, however? How much better it would be to use one of the days for some deliberate, volunteer social work for the benefit of the community! And of course the work went unpaid as it was everyone’s personal contribution towards a prosperous future and not at all a way to earn some money. 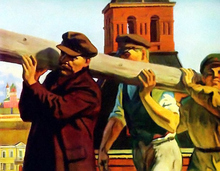 The first subbotniks took place in 1919. It was a difficult time for the Soviet Union. The country had just come through the First World War and the Bolshevik Revolution and had been shaken by Civil War and military intervention. Many believe it was Vladimir Lenin ’s idea to organize subbotniks – to stiffen the people’s spirit. But that is simply not true.

On the night of Saturday 12 April 1919, fifteen workers from one of Moscow’s railway depots finished their shift but didn’t go home. They stayed at the shop and continued to work.

The protocol notes of the man behind the initiative reads as follows: “We’ve been working for 10 hours, till 6 am, and have repaired three locomotives… At 6 am we gathered at a cabin car to discuss our job. We took some tea, rested a bit and decided to repeat our Saturday night work every week… We sang ‘International’ and went home.”

First steps across the country

A year later on 1 May 1920 the USSR’s Communist Party announced the first all-Union subbotnik. Vladimir Lenin was among the thousands who participated in the event. The father of the Soviet revolution took part in removing building rubble at the Moscow Kremlin, something that inspired painter Vladimir Krikhatsky to create his famous Lenin at the First Subbotnik, which depicts Lenin carrying a log.

The fact (as well as the painting itself) was later used in Soviet propaganda – to show how close the father of the Revolution was to the working people.

Since then subbotniks became an integral part of the Soviet system; a symbolic event used to raise enthusiasm among Soviet people and promote ideas of socialism.It was also aimed at playing a crucial socialist-society-building role, uniting students and teachers, factory and institute workers and bosses and subordinates in a common impulse.

In the later years of the USSR subbotnik was held in the beginning of spring, right after the snow melted. Therefore it became associated with post-winter cleaning - sweeping streets, collecting garbage and washing windows and façads if the buildings. People also planted trees, flowerbeds and lawns.

From voluntary to obligatory

Eventually, subbotniks became obligatory political events in the USSR, with the annual "Lenin 's subbotnik" being held on Lenin 's birthday. Those who refused to participate faced severe reprimands and even risked being fired.

Beyond the Soviet Union

At first, the concept of subbotnik spread within the Soviet Union only. But in the 1950s it began to be promoted in other countries of the so-called Communist Bloc as well, especially in the German Democratic Republic, which the USSR sought to turn into the westernmost outpost of socialism in Europe. However, the idea of working during weekends did not meet with much enthusiasm from most people abroad. 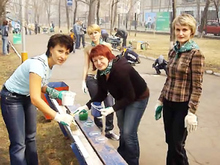 Subbotnik hasn’t disappeared. All-city or even all-country subbotniks still take place every spring in modern Russia and in some former Soviet Republics. As always - they are volunteer and unpaid.

Subbotniks continue to be an important team-building mechanism. Large corporations and companies with huge staff organize them to unite workers. But today’s subbotnik differs much from what it used to be.

First, any work on the beautification of a city or town is called subbotnik only if it’s carried out by non-professional employees. Subbotnik, for most of office workers, simply means an opportunity to clean their desks.

Second, some modern subbotniks can be charitable, raising money to support disabled or old people, orphanages, children with HIV or cancer.

Third, subbotnik no longer has any ideological nuance. It carries the air of nostalgia for the older generation and is something fun for youth. Subbotnik doesn’t necessarily take place on a Saturday anymore, and it no longer has to coincide with Lenin ’s birthday.

Nowadays, the word subbotnik also has a negative meaning in reference to the day off, which corrupt policemen use to pressure people for cash. Prostitutes use the term to define the occasion when they are detained by the police for illegal activities and have to bribe themselves out, either money or sex.